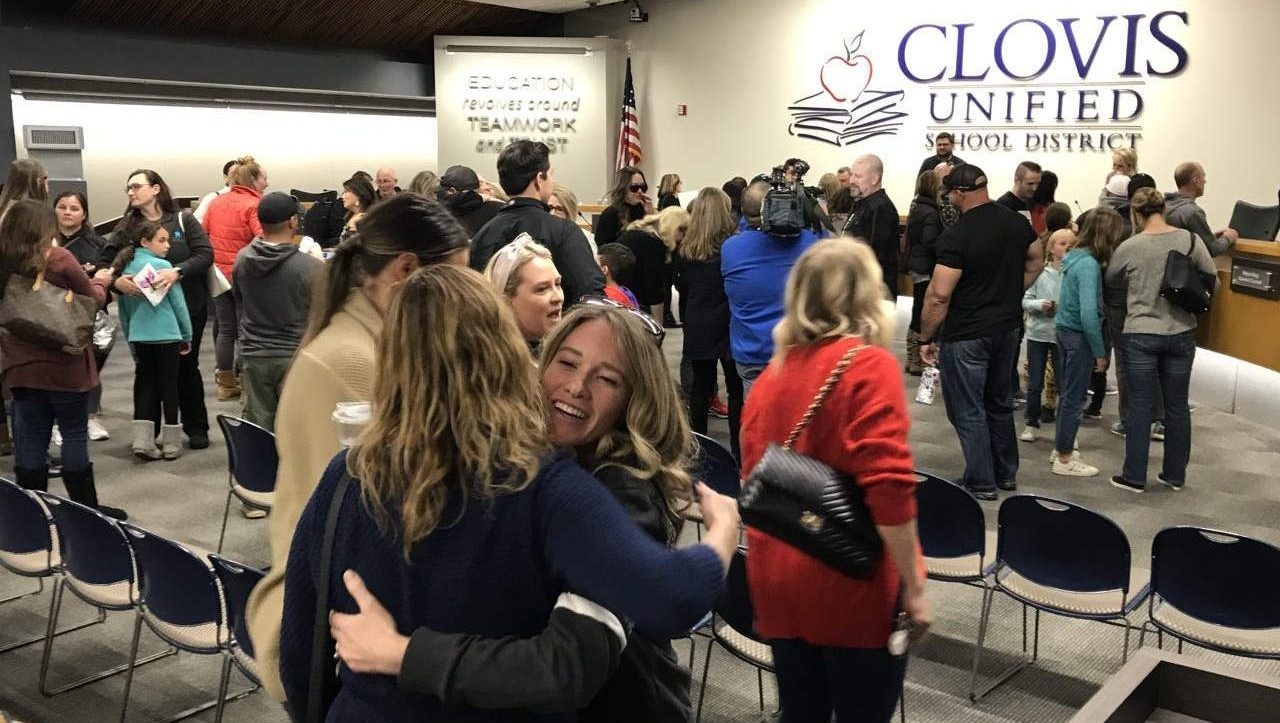 A 5-0 vote Wednesday afternoon by the Clovis Unified School Board turned the state’s mask mandate into an option for the district’s 43,000 students.

Under state rules, however, school staffers are still required to wear masks when they are around students.

The board’s vote came after more than an hour of public comment from parents, students, and community members who filled the meeting room and who almost universally called for the district to ditch the mask mandate that has been in effect since schools reopened.

Board President Tiffany Stoker Madsen seemed to reflect the thinking of a lot of parents when she related how she was explaining to her 8-year-old son that she had to attend an afternoon meeting but it might lead to a change in the mask rules. “You should have seen his eyes light up, it was like Christmas,” she said tearfully as the audience erupted in cheers and applause.

As in prior meetings, a number of the public commenters expressed deep passion and emotion, with some speakers choking up tearfully while others issued baleful threats.

One parent cautioned the School Board that any attempt to make vaccinations required once they have been fully authorized by the FDA, as Gov. Gavin Newsom has already indicated he wants to do, would have dire consequences as she and other parents would opt to pull their children out of Clovis schools.

A guidance from the California Department of Public Health set in place the requirement for students to wear masks in schools.

But the same guidance allows districts some discretion in enforcing the mask rules, said Trustee David DeFrank, who served on a three-member work group that examined the issue of the district’s mask enforcement.

DeFrank said the work group considered two issues: How low is the risk, and would making masks optional be good for students.

He said that since the district installed high-quality HEPA filtration systems, added bipolar ionization purifiers to school HVAC systems, and have made N95 and KN95 masks readily available to students and staff, and with the decreasing number of coronavirus infections in Fresno County, the risk appears low.

As for whether making masks optional is good for students, DeFrank said that during the pandemic students have already been out of the classroom too much, and to exclude them now for refusing to wear a mask only compounds their learning and social-emotional losses.

In addition to ending the protocol to exclude maskless students from classrooms, the board voted unanimously to enforce the mask mandate through “education-based approaches:” By posting visible notices of the mandate on campuses, encouraging students to follow the mandate, and notifying parents in writing when their children refuse to wear masks.

Parents complained that the mask mandate has been inconsistently enforced within schools, with some teachers insisting students stay masked while others allowing students to go unmasked.

Teachers have expressed concern about whether their credentials could be in jeopardy if they fail to enforce the mask mandate. But district officials said Wednesday that teachers would be protected if they follow the district’s decision.

Clovis Unified’s policy has been to bar students who wouldn’t wear a mask from class, call their parents to pick them up and advise their parents of other education options, including online learning. But some parents have refused to retrieve their kids, so schools have had to find a safe place inside the school where the students can do independent learning while supervised but away from their classroom.

But a number of those have occurred at Copper Hills Elementary. Numerous Copper Hills parents were among the 18 speakers at Wednesday’s board meeting and talked about actions earlier Wednesday at the northeast Fresno school that one speaker equated to child abuse.

Avants said district officials had learned that some parents planned to escort their maskless children into their classrooms, in violation of the existing mask rules. As a result, school officials decided to rearrange the school day and rescheduled recess and PE from the afternoon to the morning so that students could participate in school activities outdoors without masks while their parents stood by.

But Superintendent Eimear O’Brien appeared to side with the parents when she said that district officials were “not proud” of the events Wednesday at the school. “What happened today at Copper Hills shouldn’t have happened,” she said.

The topic of mask use could soon become moot, however. California’s top health official, Dr. Mark Ghaly, said last week that Gov. Gavin Newsom’s administration may be considering changes and could make an announcement next Monday.