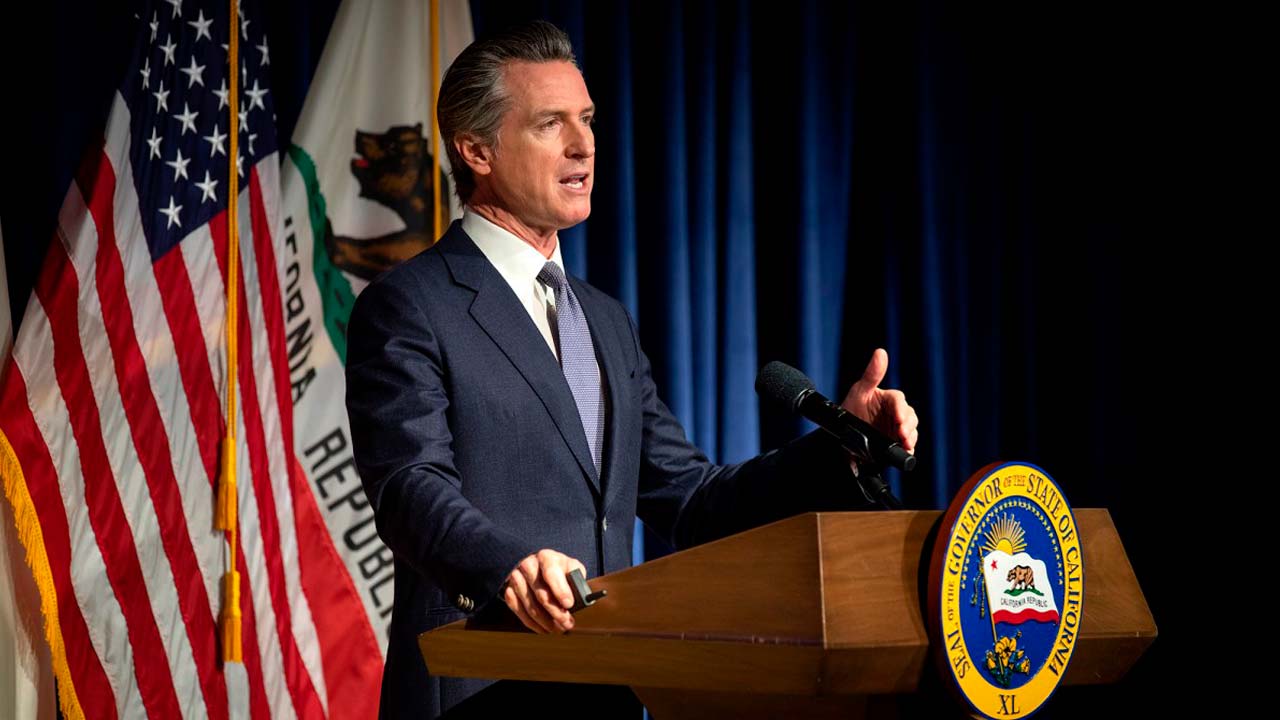 Gov. Gavin Newsom is throwing down a challenge to the U.S. Supreme Court. (CalMatters/Miguel Gutierrez Jr.)
Share with friends

DEL MAR  — California Gov. Gavin Newsom has proposed letting private citizens in his state sue gun makers to stop them from selling assault weapons just as Texas lets its residents sue abortion providers to stop the procedures, then essentially dared the U.S. Supreme Court to treat both issues the same.

At a news conference in the coastal town of Del Mar, north of San Diego, Newsom said Friday he thought the Texas law was wrong and the Supreme Court’s decision in December to let it stay in effect while it’s appealed was “absurd” and “outrageous.”

“But they opened up the door. They set the tone, tenor, the rules. And either we can be on the defense complaining about it or we can play by those rules. We are going to play by those rules,” Newsom said. He later added: “We’ll see how principled the U.S. Supreme Court is.”

The unique Texas law, approved last year, bans all abortions once a fetal heartbeat is detected, usually around the sixth week of pregnancy. The law does not let the government enforce it. Instead, private citizens can sue abortion providers or anyone who “aids and abets” the procedure.

The theory is that because the government can’t enforce the law, then abortion advocates can’t sue the state to block it. That makes it much harder to challenge in court.

A bill in the California Legislature unveiled Friday would do the same thing. But instead of abortion providers, it would let people sue gun-makers and others who sell, make or distribute assault-style guns in the state.

California has banned the sale and manufacture of many assault-style guns for decades. But last year, U.S. District Judge Roger Benitez overturned that law, ruling it was unconstitutional while comparing an AR-15 rifle to a Swiss Army knife as “good for both home and battle.” The ruling incensed Newsom and he vowed to fight back.

California’s proposed legislation is exactly what gun rights groups feared would happen if the Supreme Court allowed the Texas law to stay in effect. That’s why the Firearms Policy Coalition opposed that law at the high court. The group said Friday it would go to court if necessary to block the California proposal.

The restrictions, the group said, are “really just modern-day Jim Crow laws designed to suppress the exercise of human rights the tyrants who run California don’t like.”

Newsom and his Democratic allies in the state Legislature are convinced the U.S. Supreme Court would have to uphold their gun proposal if it allows the Texas abortion law to stand. But it might not be that simple.

Melissa Murray, a law professor at New York University, said she believed if the conservative court majority could find a way to distinguish between the Texas law and the California proposal, they will.

“I think it will be a real test of this court’s principles about how they regard a law like that that basically does exactly what (the Texas law) did only in the context of assault weapons,” she said.

California law defines assault weapons as semiautomatic rifles or pistols that have a variety of functions. The bill would let people seek a court order to stop the spread of these weapons and recover a minimum of $10,000 in damages for each weapon, plus attorney’s fees.

California’s bill, authored by Democratic state Sen. Bob Hertzberg, is not yet available on the state’s website. But a fact sheet provided by Hertzberg’s office said the bill would apply to those who manufacture, distribute, transport, import into California, or sell assault weapons, .50 BMG rifles or “ghost guns” — untraceable weapons that can be bought online and assembled at home.

Sam Paredes, executive director of Gun Owners of California, said he believed the bill’s true purpose is to ban guns altogether in California.

“There’s no question that it would put some of the smaller mom-and-pop gun stores out of business if they were challenged in court. They don’t have the resources to defend themselves, even if they are not guilty,” he said. “This will have a huge chilling effect, and that’s their intent.”

The bill is one of four pieces of legislation targeting the gun industry in California. The other bills would make it illegal to market assault weapons to children, crack down on ghost guns, and make it easier for people to sue gun manufacturers for liability in shootings.

Last week, the families of nine victims of the Sandy Hook Elementary School shooting in Connecticut announced they have agreed to a $73 million settlement of a lawsuit against Remington, the maker of the rifle used to kill 20 first-graders and six educators in 2012. The case was watched because of its potential to provide a roadmap for victims of other shootings to sue firearm-makers.

California Democratic Assemblymember Rebecca Bauer-Kahan, introduced AB 2571, which would limit the type of firearms advertising and marketing that can be geared toward children. She and Newsom said the gun industry is using social media and children’s books, mascots, apparel, and guns decorated to appeal to kids.

The company’s website says its goal is to “safely help adults introduce children to the shooting sports.” The company’s logo is a skull sucking on a baby pacifier and it is on hats, shirts, patches, and stickers.

“How the hell did they think that’s OK?” Newsom asked.

The company did not immediately respond to a telephone message and email seeking comment.

Rents Go ‘Insane’ Across US With No End in Sight