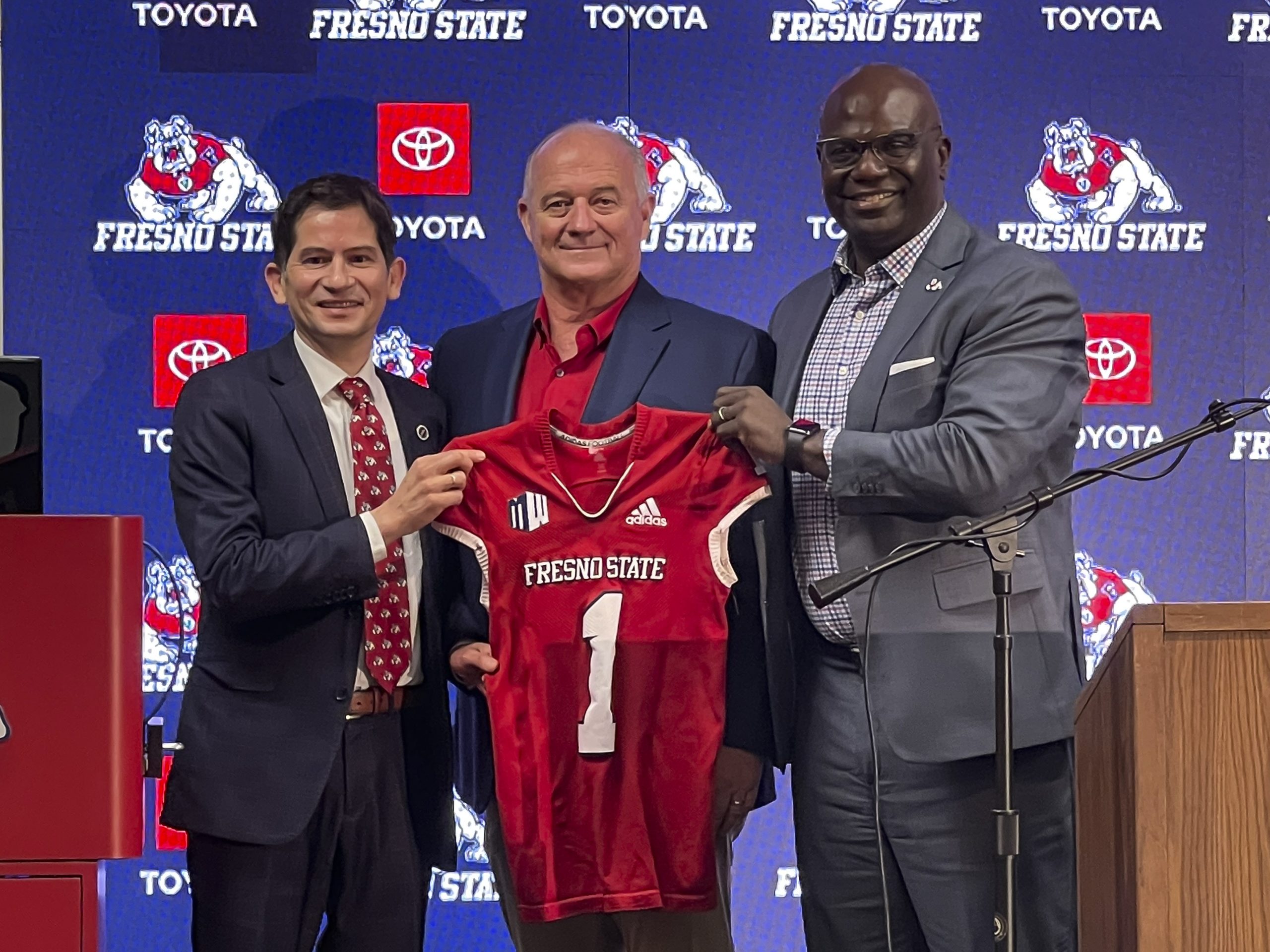 It’s clear to me that coach Jeff Tedford had one thing in mind when he returned to Fresno State.

Turn the Bulldogs into a collegiate power that bids good-bye to the usual ups and downs of Group of 5 schools.

When the names of the coordinators and assistants coming to Fresno were revealed Thursday morning, my phone blew up with calls and texts from former players.

The verdict was unanimous: Tedford did a fantastic job, can’t wait for the 2022 season to begin.

These are proven coaches, many with NFL experience, who will make the Red Wave quickly forget that Kalen DeBoer ransacked the staff when he scooted off to Washington.

I have seen defensive coordinator Kevin Coyle from opposite angles, First, as a player at Fresno State when he was here before. Then, going up against him when I was in the NFL and he was with the Cincinnati Bengals.

He’s going to bring a lot of pressure and attack the opponent’s pass protection. In addition, he’s great at teaching defensive backs how to recognize pass routes. Fresno State defenders will love playing for him.

John Baxter has coached special teams for some of the nation’s biggest programs, like USC and Michigan, and has been honored as the top special teams coordinator in the nation. He’s also an education guru, which is important because most college players don’t make it to the NFL.

When John’s name was announced, I got phone calls from former players reciting Baxter’s special teams creed. That’s the kind of bond he develops with players.

Franklin, Williams, Skipper Are Bulldogs Through and Through

Jethro Franklin is a huge hire. Not only is he one of the greatest pass-rushers in Bulldogs’ history, but he has played and coached in the NFL. Nick Burley, another Fresno State sack master, is ecstatic about Jethro’s return.

What is there to say about J.D. Williams, who is staying with the Bulldogs, and Timmy Skipper, who is coming back to Fresno, that hasn’t been said already? Both are fully capable of being head coaches. Both are all-time Bulldogs greats. And, both will continue to have a positive impact on the young men they coach.

Newly promoted offensive coordinator Kirby Moore had the Bulldogs firing on all cylinders in their New Mexico Bowl victory. Under Tedford’s tutelage, Moore will continue on his trajectory as one of college football’s rising stars.

NFL Officiating Is a Mess

In addition to angering fans, the inconsistency of NFL officiating is making the games tough to watch.

I don’t know what constitutes pass interference and holding anymore. Apparently, neither do the referees.

The no-call against the Los Angeles Rams when Seattle’s DeeJay Dallas was bumped and had his arm locked down by Ernest Jones on an underthrown pass late in the game was egregious.

Thinking back to the pass interference no-call against the Rams when they played New Orleans in the 2018 NFC title game, it’s possible that Rams fans are happy with the officiating. But they might be the only ones.

Pass interference is a judgment call. However, in the quest to get things right, the NFL should use replay to review questionable PI flags. That review should be initiated by “the booth” and not the coaches.

When it comes to holding, I went crazy on the NFL Network the other day and said maybe they shouldn’t call holding on the offense or defense inside the tackle box. The reaction from my colleagues? Do that, and there will be fights on every play.

So, I’ve come up with another idea. Make it a spot penalty instead of penalizing the offense 10 yards. If there is a hold in the backfield, start the next play where it happened. A 10-yard penalty crushes the offense. It’s too big a price to pay for something that happens on nearly every play and is inconsistently flagged. 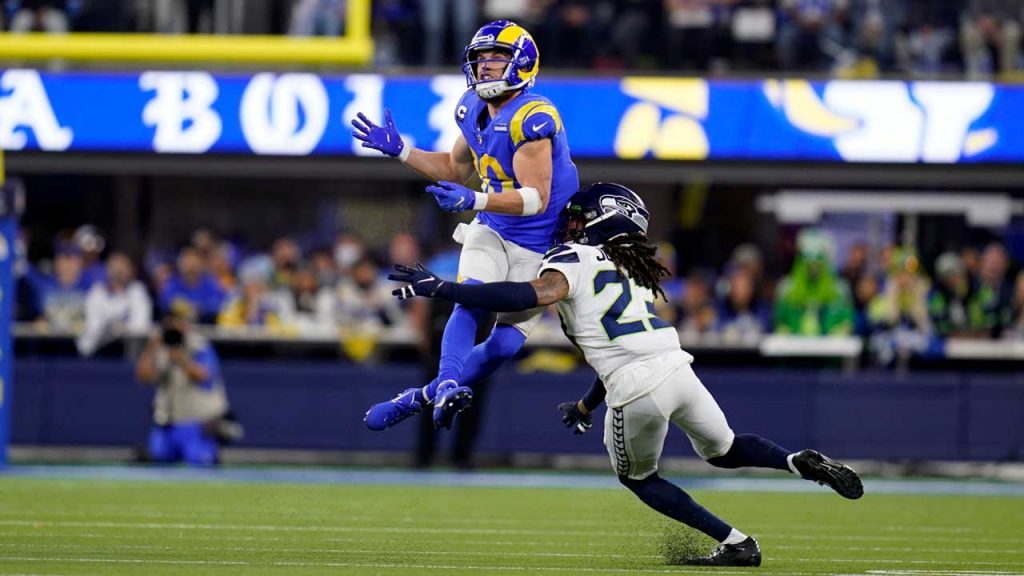 Los Angeles Rams wide receiver Cooper Kupp leads the NFL in receptions (122), receiving yards (1,625), and receiving touchdowns (14). He is attempting to become the first player to finish a season leading the league in all three categories since Carolina’s Steve Smith in 2005. (AP File)

Here’s how the race for the postseason shapes up:

1. Green Bay (11-3) — Everything is coming together nicely for the Packers, who close the season with the Lions. Can you say, “Come to Lambeau for the playoffs?”

2. Tampa Bay (10-4) — The Bucs are banged up and Tom Brady is steaming after getting shut out at home by the Saints. But have you seen Tampa Bay’s remaining schedule? It’s perfect for getting healthy again, with two games against the Panthers (5-9) sandwiched around the Jets (3-11).

3. Dallas (10-4) — Thanks to owner Jerry Jones’ free-spending ways, no team is as dependent on its stars as the Cowboys. If Dak Prescott et al are healthy when the playoffs start, Dallas could go a long way.

4. Los Angeles Rams (10-4) — The defense has turned things around and is stopping opponents cold. Plus it appears the Rams have the refs in their back pocket.

5. Arizona (10-4) — With consecutive losses to the Rams (understandable) and the Lions (inexplicable), the Cardinals are question marks. The answers will soon become clear as Arizona faces the Colts (8-6) and the Cowboys in the next two weeks.

6. San Francisco (8-6) — The 49ers are built for the playoffs, but they have to get there first. Whether they do or not might well depend on beating the Rams in their season finale.

7. New Orleans (7-7) — It would be a crime if a team with two wins this season over Tampa Bay, not to mention wins over the Packers and the Patriots, doesn’t make it to the postseason.

1. Kansas City (10-4) — All of a sudden, tight end Travis Kelce stops dropping balls, and the Chiefs are lighting up the scoreboard.

2. New England (9-5)  — Don’t know which was the bigger news: the Patriots losing to the Colts, or Bill Belichick apologizing to reporters for a brusque post-game interview.

3. Indianapolis (8-6) — RB Jonathan Taylor is an MVP candidate and the defense is one of the best. But how far can you go in the playoffs when Carson Wentz can’t be trusted to throw the ball?

4. Buffalo (8-6) — Despite a disappointing season thus far, the Bills are virtually assured of 10 wins. After Sunday’s trip to New England, they have the Falcons (6-8) and Jets at home.