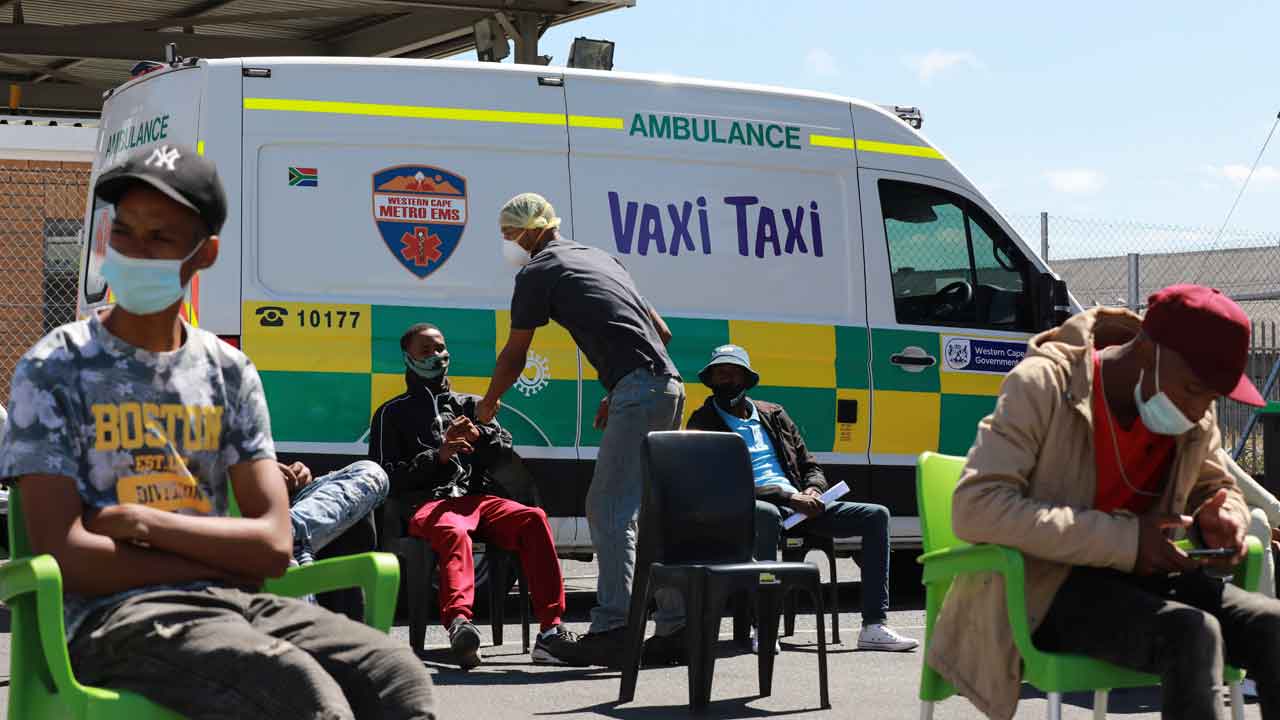 People wait to be vaccinated at a mobile "Vaxi Taxi" in Cape Town, South Africa on Tuesday. (AP Photo/Nardus Engelbrecht)
Share with friends

The omicron variant appears to cause less severe disease than previous versions of the coronavirus, and the Pfizer vaccine seems to offer less defense against infection from it but still good protection from hospitalization, according to an analysis of data from South Africa, where the new variant is driving a surge in infections.

The findings released Tuesday are preliminary and have not been peer-reviewed — the gold standard in scientific research — but they line up with other early data about omicron’s behavior, including that it seems to be more easily transmitted.

Still, some experts cautioned that it’s too soon to draw conclusions about the outcomes from omicron since the variant is still quite new and hospitalizations can lag weeks behind infections.

The study did not look at booster shots, which are not yet prevalent in South Africa but which data from elsewhere has indicated improves protection.

The analysis in South Africa was based on examining more than 211,000 COVID-19 test results that date from Sept. 1 to Dec. 7 — 41% of which were for adults who had received two doses of the Pfizer vaccine, which is the most commonly used one in South Africa.

The study split the samples up into two periods: those taken before Oct. 31, when omicron was likely not very prevalent in South Africa, and those from after Nov. 15 when it was gaining ground. The latter group was used as a proxy for measuring the effects of the omicron variant.

Experts now say that omicron accounts for more than 90% of all new infections in South Africa, according to Discovery Health chief executive Dr. Ryan Noach, and it is also picking up steam in other countries.

Researchers around the world are rushing to figure out what the variant will mean for the coronavirus pandemic now well into its second year. More information came Tuesday from Pfizer, which announced that its experimental pill to treat COVID-19 — separate from it its vaccine — appears effective against omicron.

In the weeks since the variant was detected, South Africa has experienced rapid spread of the virus. The seven-day rolling average of daily new cases in the country rose over the past two weeks from 8.07 new cases per 100,000 people on Nov. 29 to 34.37 new cases per 100,000 people on Dec. 13, according to Johns Hopkins University. The death rate hasn’t increased during that same period.

Many are now looking to South Africa for clues about what the world could be in for.

“The omicron-driven fourth wave has a significantly steeper trajectory of new infections relative to prior waves. National data show an exponential increase in both new infections and test positivity rates during the first three weeks of this wave, indicating a highly transmissible variant with rapid community spread of infection,” Noach said.

Although case numbers are rising, hospital admissions for adults diagnosed with COVID-19 are 29% lower compared to the wave that South Africa experienced in mid-2020, after adjusting for vaccination status, according to the analysis.

In addition, the study showed that people fully vaccinated with Pfizer had 70% protection against hospital admission during the omicron surge. That’s a drop from the 93% protection seen in South Africa’s delta-driven wave.

The study indicated significant protection against hospital admission even among older age groups, with 67% in people aged 60 to 69 and 60% for people aged 70 to 79.

Not Enough Data for Broad Conclusions

But some say there’s still not enough data to draw broad conclusions about hospitalizations and the severity of disease caused by omicron.

“Their analyses covers just three weeks of data. Thus, it is important to avoid inferring too much right now,” Dr. Michael Head, Senior Research Fellow in Global Health, University of Southampton, wrote of the study.

Although South Africa’s findings indicate that omicron may cause milder disease, reports from Denmark show the opposite, he wrote. There are many variables that can affect the findings, including any previous infection, potentially waning immunity and the age range of people infected so far.

“Is omicron milder, or more severe than delta?” asked Head. “Time will tell. The world’s finest scientists, including many in the global south such as in South Africa, will find out. For now, national-level decision-makers have to consider that discretion is the better part of valor.”

The U.K. Health Security Agency said Friday that new data from the U.K. confirm that omicron is more easily transmissible than other variants. Other studies suggest that both the AstraZeneca and Pfizer vaccines are less effective in preventing symptomatic infections in people exposed to omicron, though preliminary data show that effectiveness appears to rise to between 70% and 75% after a third booster dose.

Europe, US Frustrated With Iranian Stance in Nuclear Talks

Why Hospitalizations Are Now a Better Indicator of COVID’s Impact