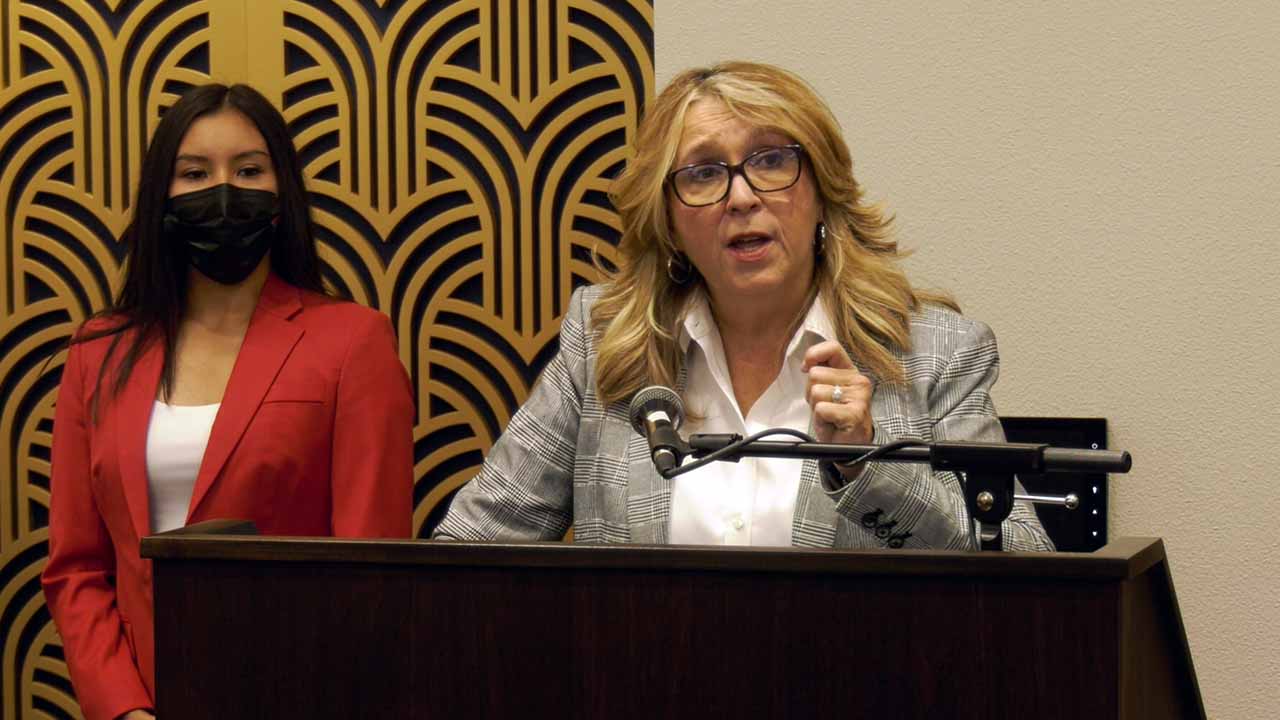 Goldsmith told reporters later that she was thrilled to be named to the district’s top job and not disappointed that the vote was not unanimous.

“Well, everybody likes to be loved by everybody, but that’s OK,” she said during a news conference in the boardroom of State Center’s downtown headquarters. “I still love and will work for everybody. All the trustees, all the students, the faculty and staff. So I don’t think disappointed is the right word. I’m going to continue to do my job to the very best of my ability.”

The appointment is contingent on the trustees and Goldsmith agreeing to the terms of her contract, which is scheduled to take effect Jan. 1. The trustees are scheduled to vote on the contract at the Dec. 14 board meeting.

Goldsmith will replace Chancellor Dr. Paul Parnell, who retired in July. Dr. Douglas Houston served as interim chancellor while the district conducted a national search that began in early March.

Board president Annalisa Perea said that three women were among the 22 candidates who applied for the post, of whom 14 met the minimum requirements. Two of those three women — Goldsmith and Dr. Beatriz Espinoza — wound up as finalists. The third finalist was Dr. Omid Pourzanjani, who recently resigned as president/superintendent of San Joaquin Delta College in Stockton. Espinoza is working at Laredo Community College in Texas as a consultant and previously served as president of Coastal Bend College in Texas.

Trustee Bobby Kahn, who cast the lone no vote against Goldsmith’s appointment, called her a qualified candidate. But Kahn said he was deeply concerned about the search process itself, which he called “very weak,” and about the paucity of candidates applying for the top job in one of California’s biggest community college districts.

“I had my doubts about how big a net was cast,” he told GV Wire Monday afternoon. “I didn’t like the entire process.”

Perea said Goldsmith’s experience in leadership roles — before she was appointed president of Fresno City College, Goldsmith was president of West Hills College in Coalinga — and her time with the district as making her the “right choice” for the chancellor job.

State Center, like other education organizations, is still grappling with the impacts of the pandemic, including decreased student enrollments. Goldsmith noted that those students who have remained enrolled have been graduating “at levels we’ve never seen before” and can expect to be able to choose from a wider variety of good-paying jobs.

She spoke directly to those students who have opted not to enroll: “I can guarantee you your education is something that will continue to provide for you and your family. One of the things we saw was those professions that had a college education and had some post-secondary education behind it, those were the ones that were impacted less severe as those who were not during COVID.”

Goldsmith said her “insider” status as a current district administrator gives her valuable insight as she takes on her new role. One of her top priorities will be to lobby in Sacramento for legislators to give community colleges a bigger slice of the funding pie, Goldsmith said.

Keith Ford, president of the State Center Federation of Teachers, was among the couple dozen district employees at Monday’s news conference.

Asked about Goldsmith’s appointment, Ford said, “I have worked well with Chancellor Goldsmith for many years. In her new role, I will continue to work with her to ensure both that our students thrive and that our faculty are respected and valued.”

Career as a NASA Engineer? This Fresno Teen Shoots for the Stars