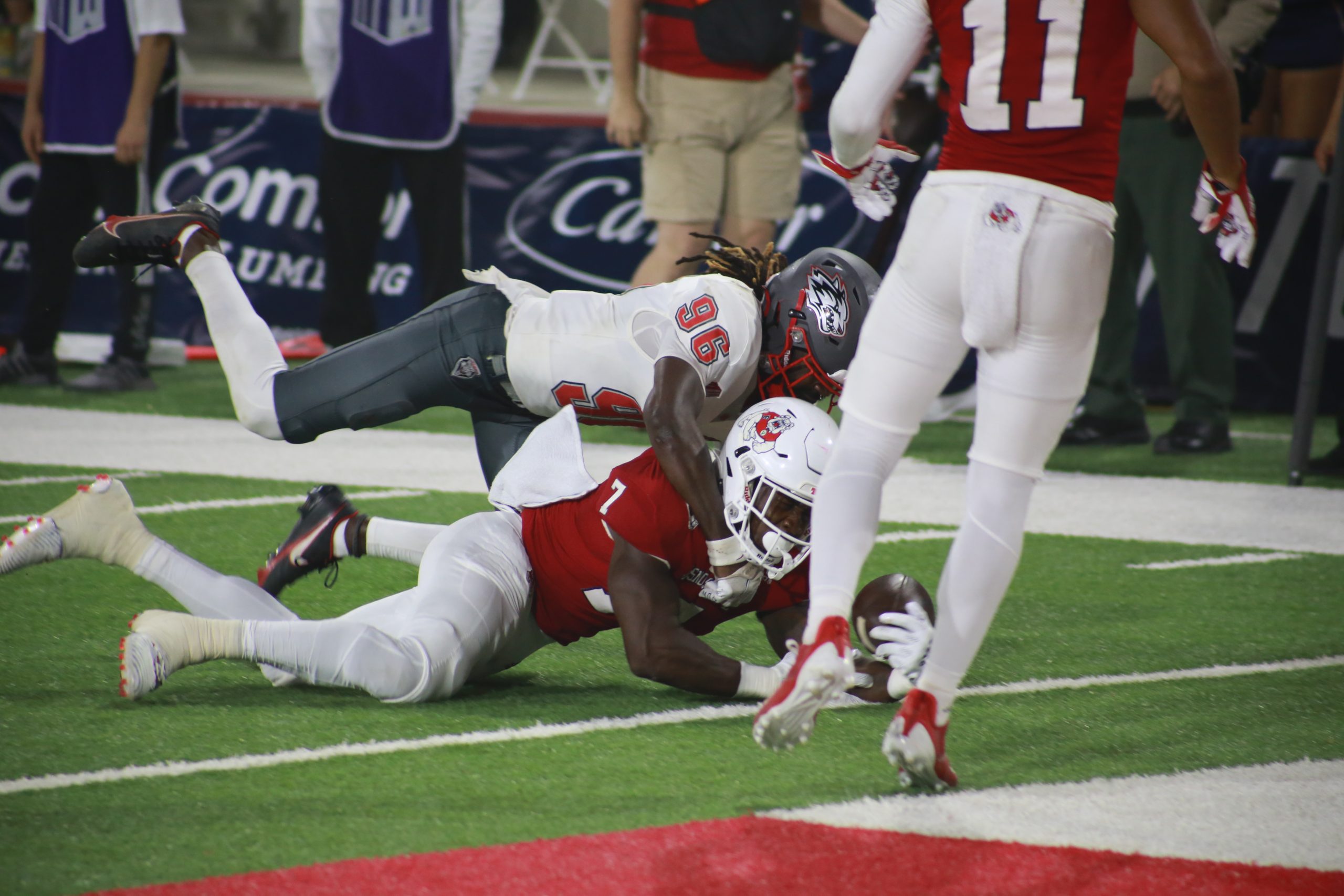 Finally, the Red Wave could breathe a sigh of relief. The Bulldogs had an easy game.

Scoring the first 27 points of the game, Fresno State defeated New Mexico, 34-7 Saturday at Bulldog Stadium. The offense breezed and the defense held firm on a relatively cool evening with 62 degrees at kickoff and a light fog layer rolling in.

“It’s a great bounce-back win,” running back Ronnie Rivers said after the game. Saturday’s contest might have been the senior’s final game in front of a home crowd.

Fresno State (8-3, 5-2 MWC) has one more game remaining, a Thanksgiving Day contest at San Jose State. Win that, and with help from other conference teams, the Bulldogs could host the Dec. 4 Mountain West title game. 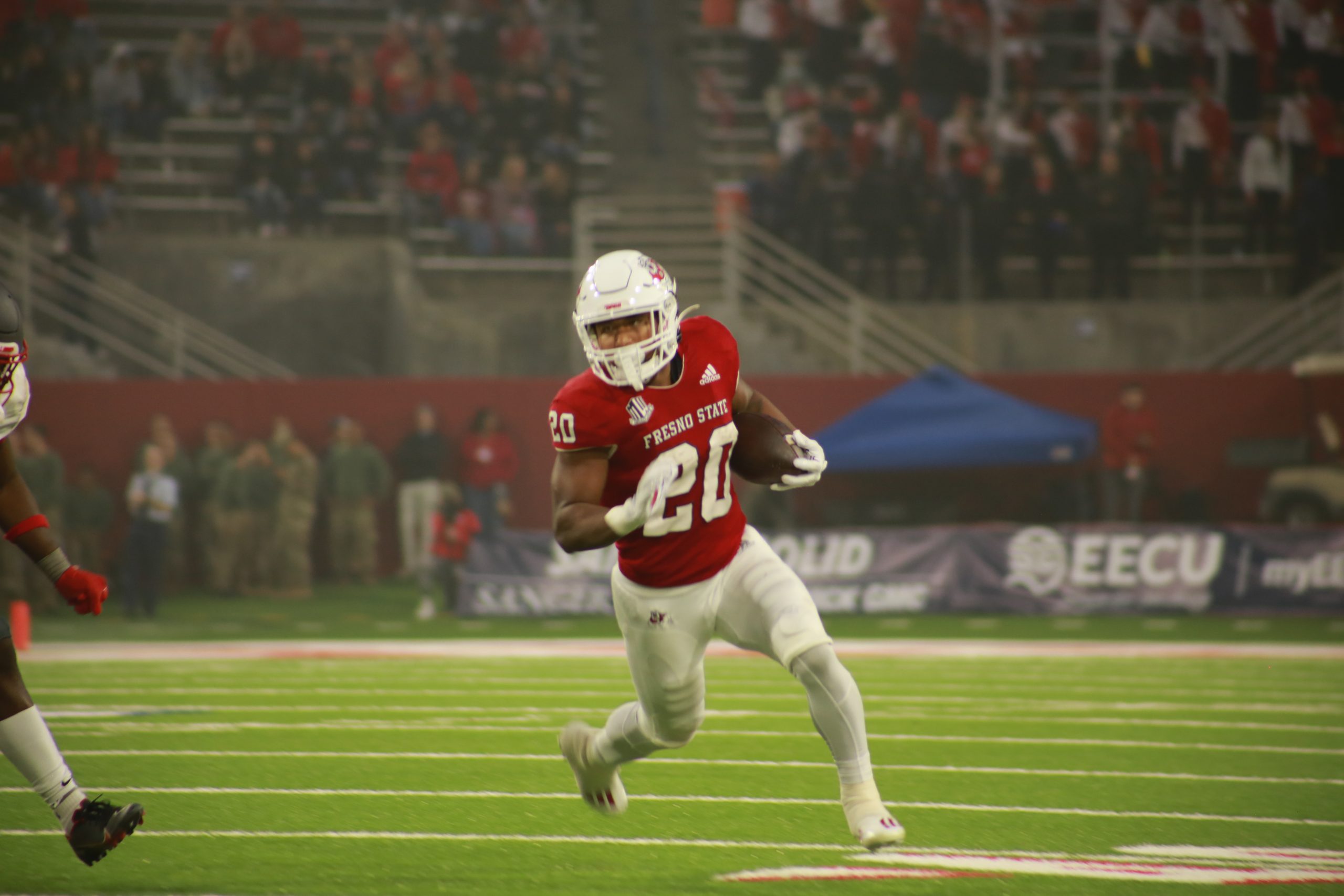 The Lobos (3-7, 1-5 MWC) option offense did not fool Fresno State. Even when Aaron Dumas ran for 63 yards deep into Bulldog territory, the defense responded with three straight tackles for lost yardage, and New Mexico missed the ensuing field goal try. Dumas’ run was the only first down of the half for New Mexico.

“We were disciplined in our assignments,” DeBoer said of the defense.

The game started well enough. Without defensive end David Perales available in the first half — he had to sit out because of a penalty from a targeting infraction last week — the defense forced a bad pass from New Mexico quarterback Isaiah Chavez on the second play of the game. Cale Sanders Jr. picked off the pass. With the short field, Ronnie Rivers scored his 40th career rushing touchdown, an all-time program record. On the six-play, 31-yard drive, Fresno State utilized the wildcat formation three times.

“I made my mark. I didn’t want to live in my dad’s shadow,” Rivers said of his legacy. His father Ron Rivers was also a Bulldog running back great who later played in the NFL. 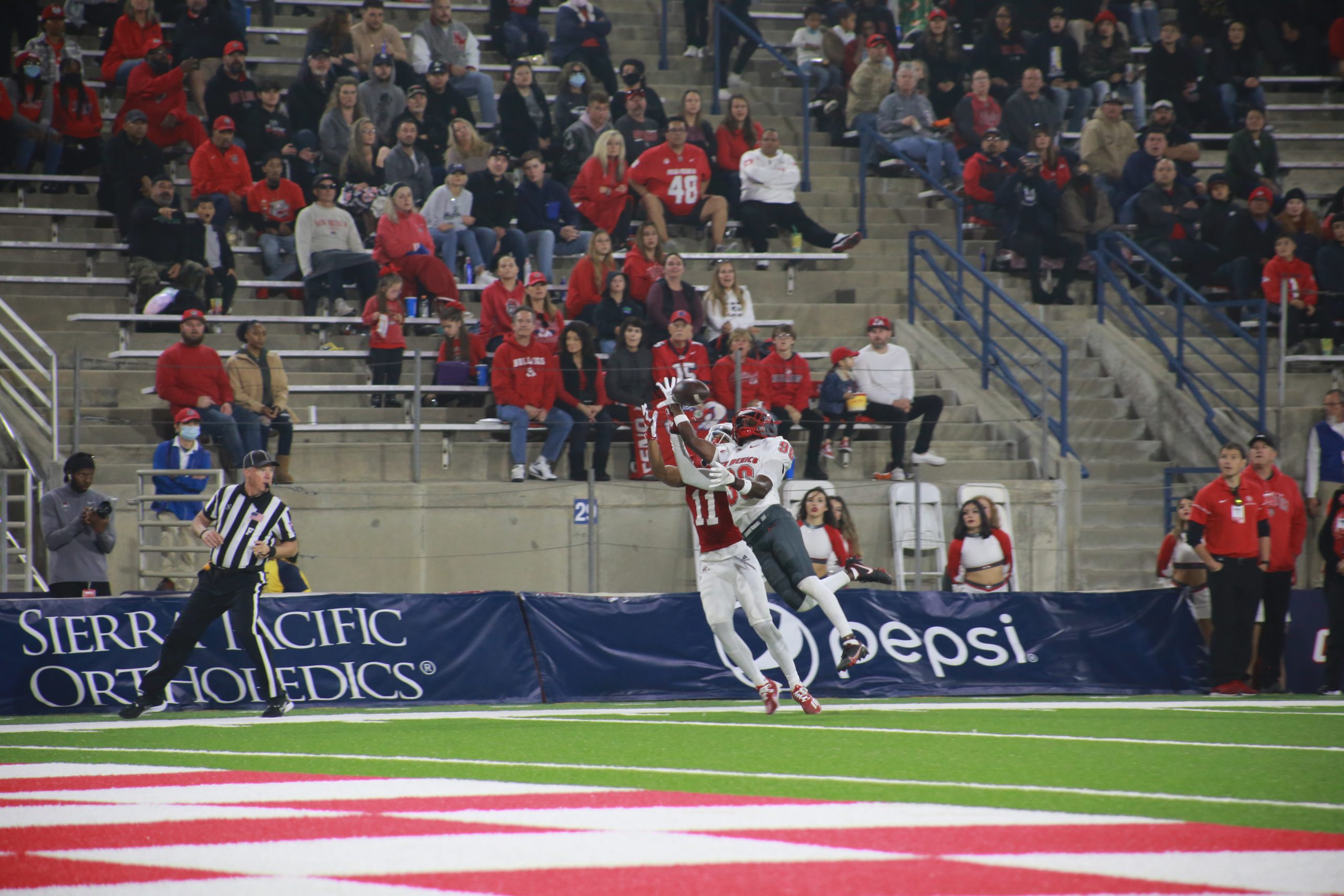 The ball slipped, then landed in the hands of Josh Kelly (11) during a second quarter touchdown. (GV Wire/Johnny Soto)

Fresno State’s offense ran smoothly, with the ball bouncing their way. The Bulldogs third touchdown of the game — a 21-yard Jake Haener pass to Josh Kelly — saw the ball slip out of the receiver’s hands only to drop gently back in.

There was a point in the third quarter, where momentum seemed to shift the Lobos’ way. After getting on the board with a touchdown — on a drive extended by a Fresno State penalty for roughing the passer — New Mexico sacked Haener for a 13 yard loss. Two plays later, the pressure came again, but Haener found Jordan Mims on a screen pass good for 78 yards. Three plays later, Haener found Mims again for the 4-yard touchdown.

“It was a really good call by (offensive coordinator Ryan) Grubb … Mims wiggled his way into Haener’s vision … we got some key blocks. Jordan continues to show his explosiveness,” DeBoer said. “That was a big play.”

Haener played an efficient game, with a 77% completion percentage, no interceptions, three touchdowns, and 300 passing yards. It was Haener’s seventh 300-yard game this season.

“I like how collected he was. His poise this week was really good,” DeBoer said. “It showed in practice. He was consistent all week.”

DeBoer praised Haener’s playmaking, even if it meant throwing the ball away and opting for a punt.

“I love it when our backs are involved in the pass game,” DeBoer said.

There is still a chance Fresno State can host the Mountain West title game on Dec. 4, but it would mean lots of breaks beyond the team’s control falling their way.

The good news within the West division is Fresno State own tiebreakers over San Diego State and Nevada. With the Aztecs and Wolf Pack playing each other Saturday night guaranteeing one of those teams will have two conference losses, the winner of that game will have to lose at least one more time in the final two weeks of the season. That scenario would create at least a three-way tiebreaker giving Fresno State the advantage.

The Bulldogs would also need the Mountain division champion to have at least two conference losses, meaning Utah State (4-1 headed into its Saturday night game at San Jose State) needs to lose one more time in its final three games.

A Bulldogs tiebreaker against another Mountain division team (likely Utah State or Air Force) would likely be decided by a composite of computer rankings.

— The Bulldogs did not replicate a sellout, but drew 35,020 fans for the regular season finale.

— The team celebrated 17 seniors during pre-game introductions. Family members greeted the players as they ran onto the field. That opportunity was not available last year because of the pandemic. The NCAA granted one more year of eligibility to players because of COVID.

—Former Bulldog baseball players and World Series champion Dylan Lee of the Atlanta Braves were introduced to the crowd during the first quarter.

[Correction: the original version of this story said the Mountain West title game was Dec. 1. It is Dec. 4.]
Related Topics:Fresno State Football
Up Next