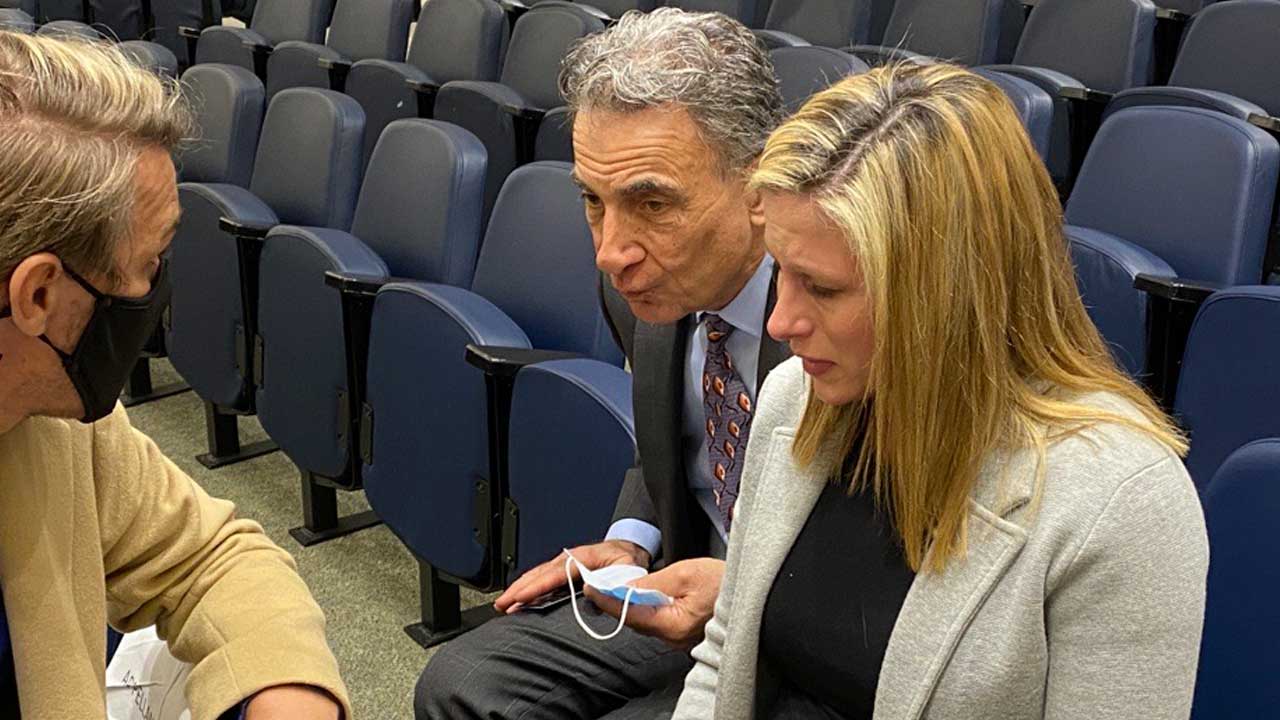 Courtney Caron, right, with The Artist Tree, is consoled by supporter Tyler Mackey and business partner Lawrence Artenian after their cannabis application was stymied. (GV Wire/David Taub)
Share with friends

“I hope that the administrative team got the message pretty clearly that they should not be bringing forward proposals that don’t meet the values of this council. Location matters, resident and support matters. Proximity to schools, parks, and community centers matter.” — City Councilman Miguel Arias

Lemonnade in the Tower District is moving ahead in the lengthy process. Meanwhile, four more applicants are now pondering their next moves.

In a special meeting, the council heard appeals on five of the 21 licenses previously approved — preliminarily — by the city manager.

“I hope that the administrative team got the message pretty clearly that they should not be bringing forward proposals that don’t meet the values of this council. Location matters, resident and support matters. Proximity to schools, parks, and community centers matter,” Councilman Miguel Arias said at the close of the hearing.

The most contentious dispute was over the Lemonnade location at 7315 N. Blackstone Ave., two blocks from Pinedale Elementary School.

Cannabis retailers must be at least 800 feet away from schools. There was some ambiguity about the Lemonnade location. While the property line was within 800 feet of the Pinedale Elementary property line, the building itself was beyond that distance.

That didn’t matter to Councilman Mike Karbassi, who appealed the preliminary approval. The vote was 7-0 to deny the permit.

“You have the worst location in the city,” Karbassi said.

Clovis Unified School District was one of the biggest opponents, mainly concerned about the effect on students.

Pinedale Elementary principal Debra Bolls noted this is Red Ribbon Week, where students are taught the dangers of drugs.

“This very business threatens all that we’re trying to build as a school community,” Bolls said.

Superintendent Eimear O’Brien (formerly O’Farrell) spoke out strongly against Lemonnade. After the vote, she celebrated with members of the Pinedale Community Association, which opposed the location.

Lemonnade, owned in majority by local businesswoman Kacey Auston-Tibbetts, mentioned several times that the shop was the highest-scoring applicant in Karbassi’s District 2. 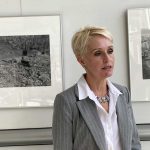 “We could have provided a significant amount of well-paid, middle-class jobs to the community that the neighbors can literally walk to and have health benefits and a 401k.” — Lemonnade owner Kacey Auston-Tibbetts, whose Pinedale location was rejected

“Why put a neighborhood through this stress?” Arias asked, with opponents in the chamber cheering him on. “It’s not about chasing a dollar. It is about making sure our kids have a better neighborhood than we had when we grew up there.”

After the vote, Auston-Tibbetts said she was disappointed.

“We could have provided a significant amount of well-paid, middle-class jobs to the community that the neighbors can literally walk to and have health benefits and a 401k,” she said.

Auston-Tibbetts said she would consult with her legal team before deciding on her next move.

A second Lemonnade location, in the Tower District at 1264 N. Wishon Blvd., was the only applicant approved during the hearing. It received a 6-1 vote, with Garry Bredefeld voting no.

Auston-Tibbetts also received a permit for a third location that was not contested — at the northeast corner of Shaw and Blackstone avenues.

The Artist Tree Denial Has Applicant in Tears

Courtney Caron was on the verge of tears.

The counsel and community affairs director for The Artist Tree said she poured her heart into their proposed Tower District location, only for an ambiguous rejection.

“We’re honestly shocked. I mean, I think that we put forth a very compelling presentation and we had public support. And I’m just confused, honestly, because we didn’t even anticipate the process today being that they had to affirmatively vote to approve us,” co-owner Lauren Fontein said.

After hearing The Artist Tree’s presentation, the council took no vote to accept or reject their applications. That meant the application was effectively dead.

The Artist Tree, located at 1426 N. Van Ness Avenue, said they would invest in refurbishing the former Full Circle Olympic building. As the theme of the store, they would feature local artists and give back to local school art programs.

Councilwoman Esmeralda Soria, who filed the appeal as the District 1 representative where the proposed store is located, asked the applicant about security procedures, the hiring process, and how to be a good neighbor.

Soria did not present a motion at the end of the hearing, nor did she explain why.

“We will be challenging,” the decision, said The Artist Tree co-owner Lawrence Artenian, who also is an attorney.

A second The Artist Tree location near Palm and Nees avenues received preliminary approval and was not appealed.

Two other applicants were denied in the Tower District. Arias, the District 3 councilman, filed the appeals.

Haven, at 335 W. Olive Ave., and Public Cannabis, at 1220 E. Olive Ave., were denied on 6-0 votes. Councilwoman Esmeralda Soria had to recuse herself because her fiancé, Terance Frazier, has an active application in the district.

Arias said the locations were too close to parks and to residential neighborhoods.

“The council has invested millions of dollars in the Tower District over the last couple of years. We’ve invested intensely in older neighborhoods and parks, cleaning up the trash, addressing the homelessness, and opposing any attempts to saturate any kind of controlled substance for adults in any of these neighborhoods,” Arias said. “And so for these reasons, I’m going to make a motion to deny both applications.”

Public Cannabis co-owner Mushana Kelly was mulling her next move. 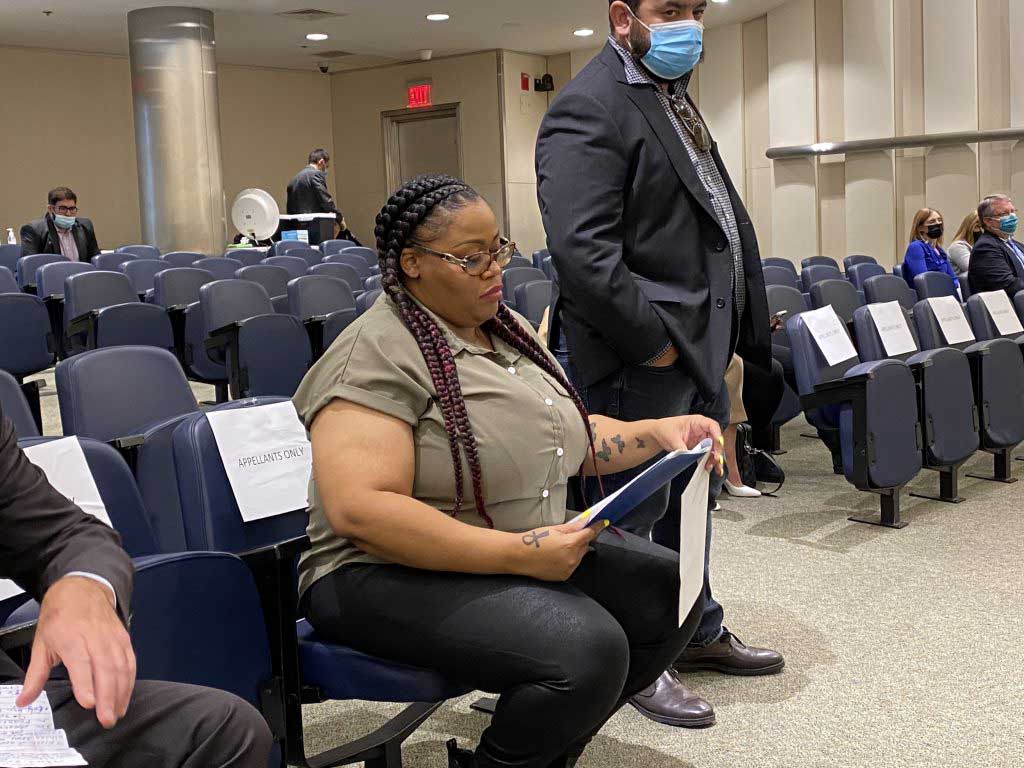 Mushana Kelly of Public Cannabis during an appeal hearing at the Fresno City Council. The council denied her permit on Oct. 27, 2021. (GV Wire/David Taub)

City manager Tommy Esqueda can now award four new preliminary licenses — two in District 3, and one each in District 1 and 2. The pool would come from those who previously filed applications.

Esqueda is not obligated to choose from the next highest-scoring applicant, the city attorney said.

The city is in the process of redrawing election district lines. City rules allow for three retail permits per district. If the lines change, City Attorney Douglas Sloan said, the stores would remain.

Esqueda said he is likely to wait for the lines to be finished in December before making the new picks.