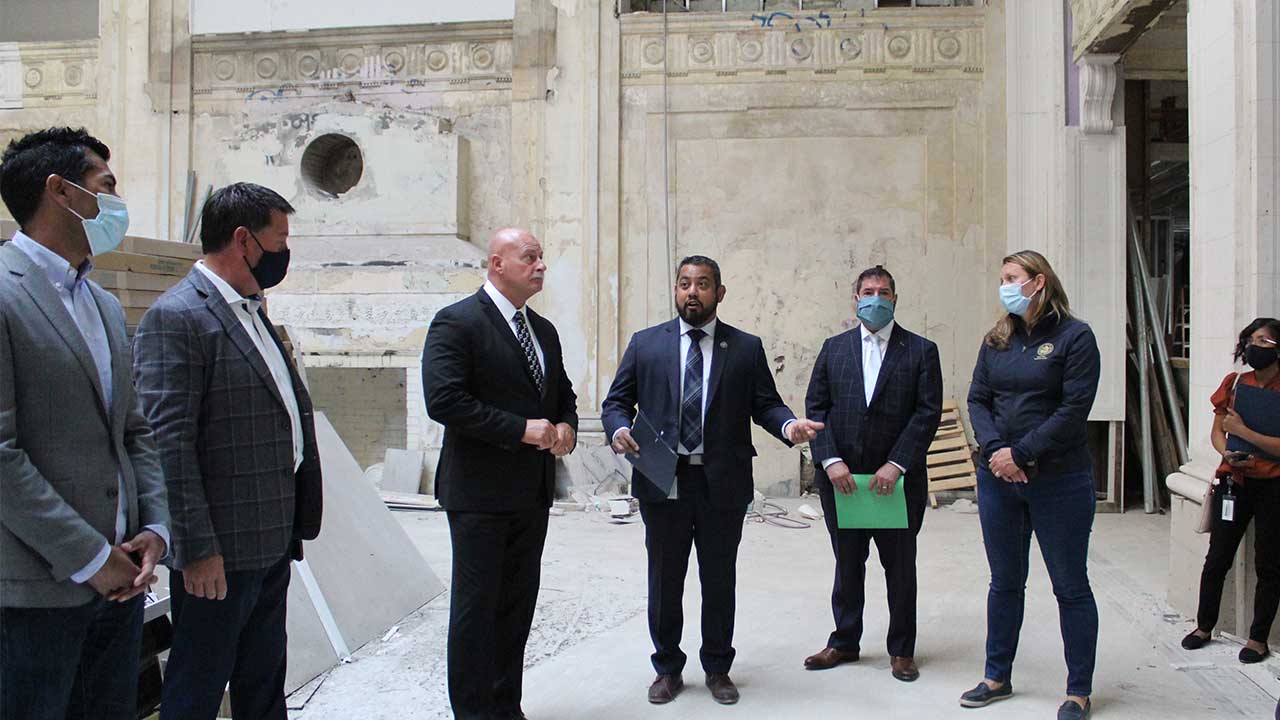 A herd of Fresno City Council members and leaders, including California state assembly members walked up and down and all around the historic Hotel Fresno on Thursday for an up close view of the downtown building’s renovation.

After remaining vacant for decades with graffiti covering the walls and corridors, and pockmarked by dilapidated doors and broken windows, much of the renovation work is now almost finished, Hotel Fresno will no longer be an eyesore.

The iconic building will soon be back in use, this time offering affordable housing units for rent.

“Fresno, which is one of the fifth largest cities in California and which has one of the hottest (real estate) markets in the entire state and the country, but there is a terrible irony that occurs here,” said Arambula. “Too many of our people can’t afford to buy a home in our city, and in the worst situations, they are losing their homes and ending up on the streets.”

Mayor Jerry Dyer, who has also been passionate about the homelessness crisis and housing affordability in Fresno since he took office, spoke about the importance of working collaboratively to address those challenges.

“Regardless of parties folks might associate us with, there’s one thing for certain that we stand shoulder to shoulder, arm and arm locked into making sure that we are providing affordable housing for our most vulnerable populations and for homeownership as well who are trying to achieve that American dream,” said Dyer. 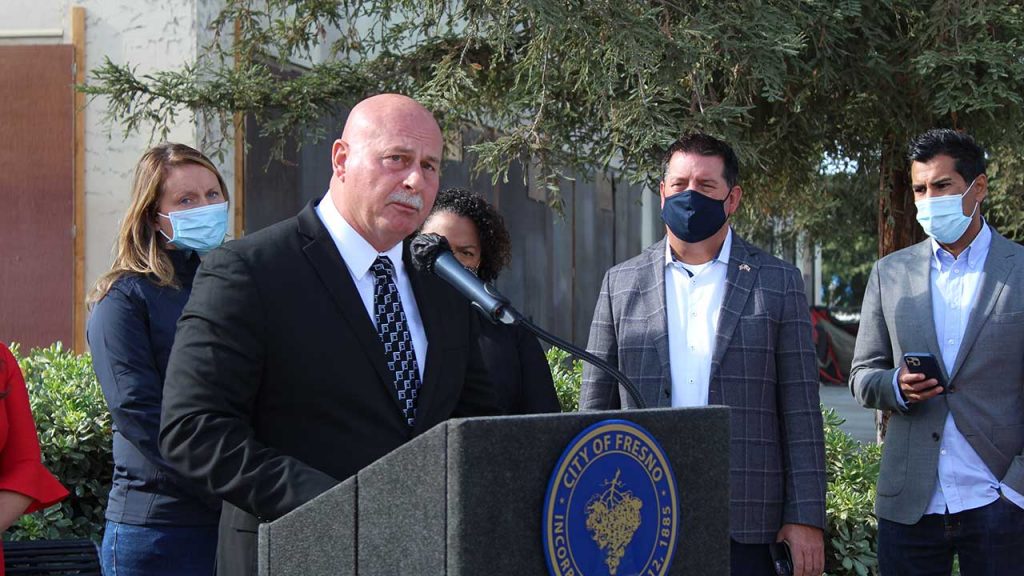 Mayor Jerry Dyer speaks during a visit on Thursday to Hotel Fresno. The historic downtown building is being converted into affordable housing units. (GV Wire/Liz Juarez)

According to Dyer, the city has allocated $5 million in local funds for off site improvements for multifamily development projects in the urban core neighborhoods. He says oftentimes developers cannot pencil out these projects and need assistance from government.

Councilmembers Miguel Arias and Esmeralda Soria spoke with Assemblymember Grayson on Fresno’s recovery plan and what the city still needs.

“We have a housing crisis in the city and this is going to be a drop in the bucket for the level of needs we need for new housing, especially for affordable housing,” said Arias. “We have a very conservative board of supervisors, they don’t see housing as a priority.”

Soria remarked that it took almost seven years to establish and develop a housing trust fund and since then some progress has been made, but says there are still big funding gaps.

“We have a big problem when it comes to allocating funding and being competitive and a lot of developers don’t want to do that because it doesn’t make sense,” said Soria. “So we have to look at state policy that is going to allow for those types of funding – we can’t continue to concentrate poverty, that’s a big ‘no no’ for communities, that’s what has left Fresno in the place where it is.”

Hotel Fresno Soon to Be Completed and Offer Affordable Housing

Arias, who has advocated for affordable housing and the restoration of historic buildings in Fresno, said the last section to be completed on the Hotel Fresno project is the ground floor, which is intended for retail storefronts, coffee shops and communal areas for neighborhood events and other services.

“The fundamental idea for downtown is that first floors are dedicated for retail, floors above are for housing,” said Arias. “This will continue with that existing theme that we want retail in the first floor with big windows that people can see in and out of that invite the public into these buildings.”

Fresh paint and molding have been added to the outside of the building and many of the living units on the top floors are almost completed. Cabinets, windows, mirrors, closets and doors have been installed, including kitchen and bathroom amenities like sinks, baths and showers. 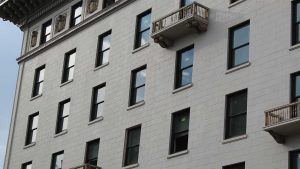 Hotel Fresno is freshly painted on the outside and new windows have been installed. (GV Wire/Liz Juarez)

Arias said the project’s developers had anticipated that the building would be open by July of this year. However, the COVID pandemic pushed back schedules due to supply backorders. The project is now expected to open in early 2022. 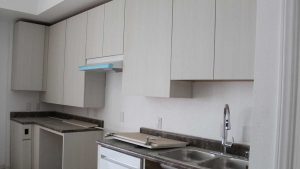 After its completion, the Hotel Fresno project’s construction costs will amount to a total of $38 million dollars.

Arias says a financing gap of $5 million dollars remains as a result of escalating costs of lumber and other materials.

With efforts to offer as much affordable housing as possible, Hotel Fresno will be accompanied by a second five story housing tower on one side of the property set to be constructed from the ground up. Developers hope to begin that project as soon as the Hotel Fresno renovation is completed.

“They are completing their financing plans for it and they have the design and drawings already, which will be at market rate,” said Arias. “It will be the same developer currently working on Hotel Fresno.”

A parking garage for both of the housing developments is planned for the other side of the building.

Who Will Be Able to Live in Hotel Fresno?

Six floors of the building will offer small and medium size apartments.

In total, the restored hotel will offer 79 multifamily units.

“We haven’t started accepting yet, but it’s going to be a very hot commodity once they open it up,” said Arias. “Some will be based on income and so it will be an income eligibility process.”

Arias said he anticipates hundreds of applications will come in on the first day they are accepted.

“The last project that we opened up on McKinley and Blackstone filled within 30 days. I expect this one will fill out much faster,” said Arias. “So it’s really great that we keep on building infill development in the city.”

After previewing the Hotel Fresno project, officials visited several other housing sites across the city including the Monarch in Chinatown, as well as stops at emergency housing shelters Poverello House and Naomi’s House.

The Monarch project is currently under construction and will consist of a four story infill housing community that will offer 57 affordable housing unit and approximately 4,700 sq. feet of commercial space.

‘This tour allows us to see both the successes and challenges that Fresno faces in addressing the housing and homelessness crisis,” said Arambula.

Related Topics:California housing
Up Next

How Long Before Kettleman City Flat Runs Out of Water?