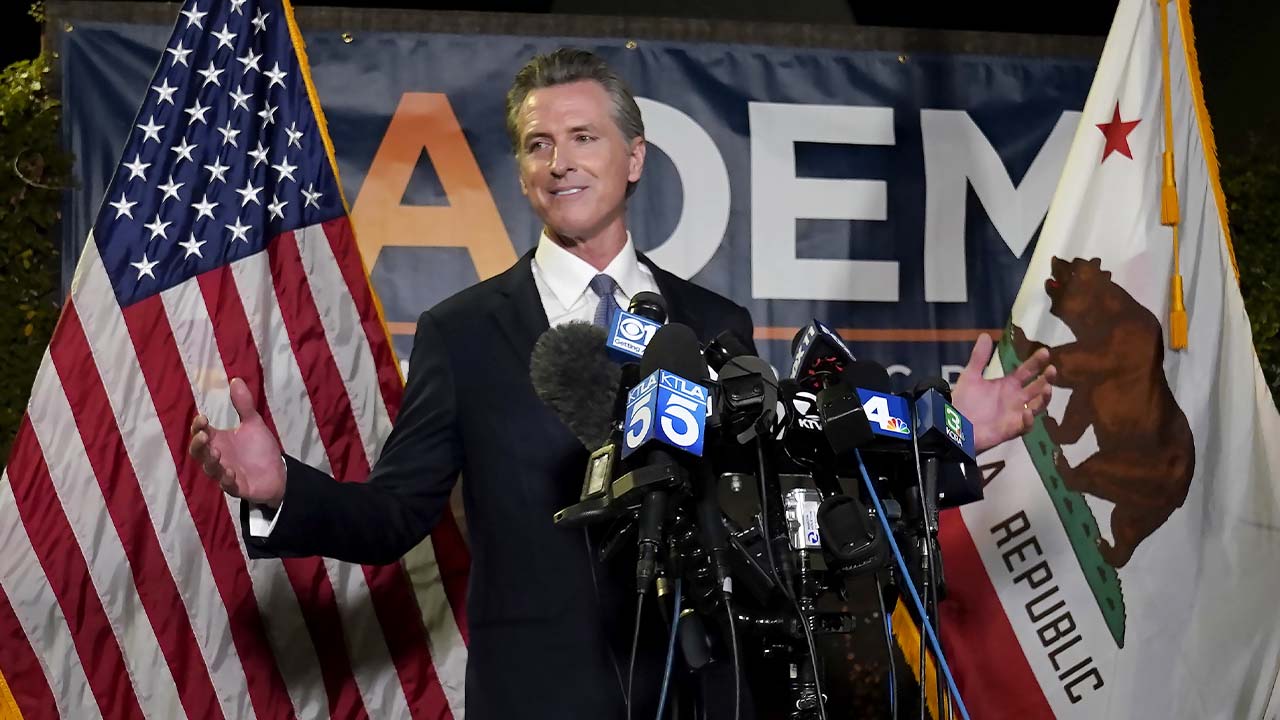 Gov. Gavin Newsom addresses reporters after beating back the recall attempt that aimed to remove him from office. (AP Photo/Rich Pedroncelli)
Share with friends

LOS ANGELES — California Republicans are eager to move on from their failed effort to unseat Democratic Gov. Gavin Newsom in a recall election and focus on U.S. House races next year that could determine which party controls Congress and whether House GOP leader Kevin McCarthy advances to the speaker’s chair.

A three-day convention of party delegates that starts Friday will include its share of soul searching and finger pointing over the recall loss last week. The party faces the harsh reality that Republicans haven’t won a statewide race in California since 2006 and its ranks continue to wither in the heavily Democratic state.

But the focus is on the future and the possibility that Republican House victories could help McCarthy, of Bakersfield, depose House Speaker Nancy Pelosi, a San Francisco Democrat.

Democrats hold 220 House seats, Republicans 212, with three vacancies. California’s congressional delegation is far more lopsided: 42-11 in favor of Democrats — but that’s an improvement for the GOP.

In 2020, Republicans regained four California House seats and leaders are making preparations to defend them and even expand that list in the upcoming midterm elections, when the party that holds the White House typically loses seats.

While the GOP remains predominantly white, the party won those California seats last year with diverse candidates – two female South Korean immigrants and two men who are sons of immigrant parents from Mexico and Portugal – and by tapping into voter discontent over high taxes, spiking crime rates and homelessness.

California is losing one House seat because of once-a-decade reapportionment, when districts are redrawn to reflect population shifts. That will cut California’s representation to 52 House seats, still the largest of any state.

It’s difficult to make predictions about specific districts until new boundaries are announced later this year, which could shade some districts more Democratic, others more Republican.

But the scuffle already is underway. The American Action Network, a conservative group with ties to House GOP leadership, has been running TV ads in Democratic Rep. Josh Harder’s district in the Central Valley. They fault congressional liberals for runaway spending and taxes and seek to link Harder to Pelosi’s “socialist agenda.”

Inevitably, the recall failure will set off a fresh round of introspection over how the party can become more competitive. Newsom beat back the attempt to remove him with a landslide margin.

It’s become routine – California Republicans lose big, statewide races, debate change, then lose again. In the last two U.S. Senate races, a Republican couldn’t even finish among the top two vote-getters in the primary, meaning the candidates facing off in the general election were both Democrats.

With the recall loss, “What did we learn? What can we change?” asked Matt Shupe, who heads the Contra Costa County Republican Party and advised GOP gubernatorial candidate Kevin Faulconer during the recall. “Six months ago, I thought the recall was ours to lose. Then we lost it.”

Shupe said unsupported claims of a rigged election circulated by former President Donald Trump and some other Republicans might have depressed turnout. Another disappointment in his home county was a lack of volunteer enthusiasm – those campaign foot soldiers who knock on doors and make phone calls to drive up turnout. While 400 people signed up to help, only about 30 participated, he said.

A generation ago, California was a reliable win for the GOP in presidential elections. The Republican-rich suburbs of Orange County, south of Los Angeles, were a foundation block in the modern conservative movement that led to the rise of the Reagan revolution.

Election losses have led to friction over whether the party needs to adjust its political compass. Then-Gov. Arnold Schwarzenegger, a GOP centrist elected in a 2003 recall election, once recommended distilling the state party’s platform into as little as a single page focusing on lower taxes, limited government and a strong national defense, while avoiding national schisms over gay rights, gun control and abortion.

The latest round of self-examination comes as the national GOP continues to search for a way forward after Trump’s tumultuous presidency.

The state party has long been unsettled by rivalries between moderate and conservative factions. Turnout in the recall fell well below expectations — Trump earned 6 million votes in his losing effort in California against Joe Biden in 2020, but only about 4.5 million voted to recall Newsom.

And even in the midst of a heated campaign the state GOP continued to shed voters – a drop of nearly 50,000 between February and August, leaving the party with about 24% of registered voters statewide. Democrats account for nearly 47%.

Among possible replacement candidates in the recall, the centrist Faulconer was trounced by Larry Elder, a conservative radio talk show host who supported Trump. Elder got nearly 50% of the votes among 46 candidates but the contest was rendered irrelevant when voters chose to keep Newsom.

Longtime conservative activist and blogger Steve Frank, who unsuccessfully sought the party’s top job in 2019, said frustration within the GOP ranks could lead some activists to start operating outside the umbrella of the state party.

“They didn’t see the state party being a factor in the recall,” Frank said. Lacking a meaningful voter-registration effort “you expect to lose.”