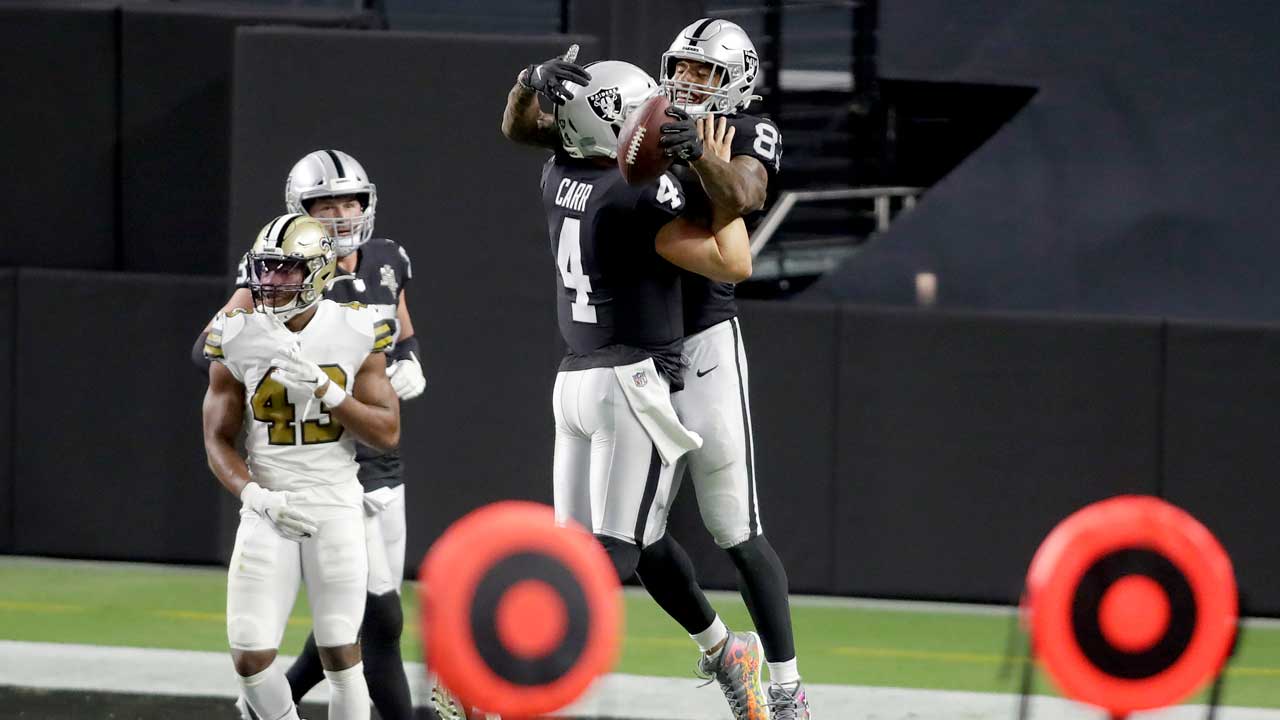 Let’s cut straight to the chase. On the evening of the second Sunday in February, NFL Commissioner Roger Goodell will hand the Super Bowl trophy to Jon Gruden.

My pick to win it all is the Las Vegas Raiders. Not Tampa Bay, not Green Bay, not Kansas City. Those are all great teams with no glaring weaknesses led by future Hall of Fame quarterbacks.

Now, you’re going to say that loyalty to my brother Derek, who is the Raiders quarterback, is blinding my judgment.

But hear me out. The Raiders are positioned to stun the world. And, here’s why.

Every year, there’s a team that seemingly comes out of nowhere and rises to the NFL’s upper echelon. Examining the Raiders’ 8-8 record last season, they are the No. 1 candidate to be that team.

For starters, they won at Kansas City and would have swept the Chiefs if not for a blown coverage with less than 30 seconds to go.

Then there’s the fact that the Raiders led the NFL in points per possession last year while scoring an average of 27.1 points a game. Their weakness was defense, surrendering a shade under 30 points game.

Gruden’s mantra since hiring Gus Bradley as defensive coordinator has been “just give us an extra one or two possessions a game.” The Raiders defense features aggressive hard-hitter players who need to be coached by someone with a strong personality. Bradley fits the bill and, as the architect of  Seattle’s “Legion of  Boom” defense, he knows how to put players in the right places.

During the preseason — games and practices — I saw a young defense that flew to the ball and didn’t look confused. If the Raiders’ defense improves just a little bit, they will turn last year’s close losses into victories.

One more thing. Gruden challenged Derek to complete 85% of his passes during offseason drills. Well, Derek completed 95% of those passes. That tells me that the Raiders’ offense is ready to go from good to elite.

Come Feb. 13, Tom Brady, Aaron Rogers, and Patrick Mahomes will watch the Super Bowl, not play in it, at SoFi Stadium in Los Angeles.

And, the Raiders will win it, beating the Los Angeles Rams in a high-scoring game that fans remember for decades.

Mahomes had to run for his life against the Bucs in the Super Bowl. But the Chiefs have bolstered their offensive line, and that’s pretty much the only thing they had to do to remain in the Super Bowl hunt. Justin Herbert played fantastic last year for the Chargers, but I have two big questions about them: the offensive line and the play-calling of offensive coordinator Joe Lombardi. He had success as a quarterbacks coach in New Orleans, but Drew Brees made his job easy. However, Lombardi didn’t do great in Detroit as the play-caller even with Matt Stafford at quarterback. So he has a lot to prove. In Denver, the defense is stout with Von Miller back from last year’s ankle injury, but the offense won’t have enough to keep pace in the division.

On the offensive side, it comes down to playmakers, and Tennessee is loaded with them. You can’t double-cover both A.J. Brown and Julio Jones without letting Derrick Henry go crazy running the ball. Load up in the box to stop Henry, and Ryan Tannehill will get the ball downfield to Brown or Jones. Defensively, the Titans struggle, but they’re big and physical and the teams who play them always feel it on Mondays. Indianapolis is interesting. They are a complete team with a huge question mark at quarterback. If anyone can get the best out of Carson Wentz, it’s Frank Reich. But I’m not comfortable enough with Wentz to say that the Colts will make the playoffs. One thing for sure, if Wentz can’t get it done with the Colts, he won’t succeed anywhere. If the Jaguars win five to seven games, they’ll be happy to move on to next year with Trevor Lawrence. The Texans are going to have a hard time winning threes games, and I think they know that.

There are huge expectations around Cleveland, but Pittsburgh will find a way to win this division.  I know Mike Sullivan, the Steelers quarterback coach very well, and he tells me that Ben Roethlisberger still has the ability to do what he’s always done in terms of arm talent. More than that, Roethlisberger is fitter and is locked in mentally. He’s seen the long-term success of Tom Brady and wants to get the Steelers back to the Super Bowl. And the defense is fantastic. The Browns have added so much on the defensive side that I can almost talk myself into predicting they’ll win the division. But, in my book, they’re still a year away. This is obviously a tough, tough division. The challenge for Baltimore is getting Lamar Jackson to be an efficient passer outside the numbers. In addition, the Ravens’ defense isn’t as good as its reputation. Cincinnati has a chance to improve behind Joe Burrow.

This is Buffalo’s division to lose. There are a lot of good quarterbacks but nobody throws it downfield like Josh Allen. I’m blown away by his arm strength. They have all the pieces to be a great team, including the right head coach, Sean McDermott. The Patriots are very interesting because even though Bill Belichick long has had an issue with rookie quarterbacks, he handed the keys to the kingdom to Mac Jones. He played like a veteran in the preseason, and I think he can make those same throws in the regular season when he has to stand in the pocket with the pressure barreling down. But when I look at Tua Tagovailoa in Miami, I don’t get that same warm and fuzzy feeling. Mac’s in a much-better offensive system, and Tua’s playing for a defensive-minded head coach who’s already changed offensive coordinators. The Jets’ prospects are brightening with Zach Wilson at quarterback and Robert Sala as coach, but their lack of talent on both sides of the ball will keep them far from the playoffs.

Related Story: Why Samoans Are 40 Times More Likely to Play in the NFL

The Rams have pushed their chips all in for this season by acquiring Matt Stafford, and will emerge from this tough-as-nails division to be NFC champions. The NFL’s best defense, with Aaron Donald and Jalen Ramsey, can shut down most any team. Seattle is poised to do big things, too, because they’ve installed the perfect offense to take advantage of Russell Wilson’s passing and running strengths. Notice that early off-season noise in Seattle has gone silent? That’s because Wilson loves this offense and understands the type of success he can have.  I wouldn’t be surprised if the 49ers made the playoffs, too. The questions for them are the quarterback situation and whether the roster can stay healthy. Arizona is going to finish third or fourth, even with a dynamic playmaker like Kyler Murray. They have some other good pieces, too. I’ll be watching to see if J.J. Watt can provide a defensive presence to complement Chandler Jones.

Tampa Bay returns all of its starters in a quest for back-to-back Super Bowl titles. Tom Brady loves competing and preparing. Most of all, he loves winning. The Saints are interesting because Drew Brees is gone. The challenge is, if Sean Payton opens up the offense and Jameis Winston throws it downfield, who’s going to end up with the football? I think the Saints are going to realize when the season’s over, just how good Brees was. When you look at the Falcons, you wonder how much of a difference the loss of Julio Jones will make. But Atlanta has an emerging tight end in first-round pick Kyle Pitts who could be in the same class as Darren Waller, Travis Kelce, and George Kittle by the end of the season. With Matt Ryan, they have enough to possibly sneak into the playoffs ahead of the Saints. I believe Sam Darnold will have a bounceback year with his new team, Carolina. However, the Panthers aren’t yet a playoff team.

Don’t be surprised if Green Bay wins 14 or 15 games. The offense is that good with Aaron Rogers and Davante Adams back. Matt LeFleur has turned the Packers into the NFL’s most prolific offense and given Rogers a second wind. On defense, their pass rush causes big problems. Their only issue is the secondary. Minnesota will play good defense for Mike Zimmer even though the defense is young, and they have offensive playmakers in Dalvin Cook, Adam Thielen, and Justin Jefferson. Until Chicago gears up its offensive line, the Bears’ outstanding defense won’t be enough to carry them to the playoffs. Andy Dalton has played well in the offensive system the Bears use, but because of the offensive line, he’s either going to get beat up or be so bad that Chicago will have to turn to rookie Justin Fields. The Lions are going to be better than people think.

Washington is the team to beat — if quarterback Ryan Fitzpatrick doesn’t try to do too much. He should be experienced enough to realize just how good Washington’s Redskins’ defense is, and be a game manager who can grind out victories. That hasn’t been the case in the past. The biggest question mark in Dallas is Dak Prescott. I’ve never seen a quarterback lose this much time in the off-season and come back with success. Now, Dak is a great athlete and might surprise me. For New York, the offensive line and whether Saquon Barkley can bounce back from his knee injury will determine if the Giants improve on last season’s six victories. This is a big year for quarterback Daniel Jones, whose turnovers have marred flashes of brilliance. Philadelphia traded for Gardner Minshew, which is a sign the Eagles aren’t sold on Jalen Hurts at quarterback. Meanwhile, Super Bowl-winning coach Doug Pederson and Carson Wentz are gone. In short, Nick Sirianni’s Eagles are a mystery.