Crews Struggle to Stop Fire Bearing Down on Lake Tahoe 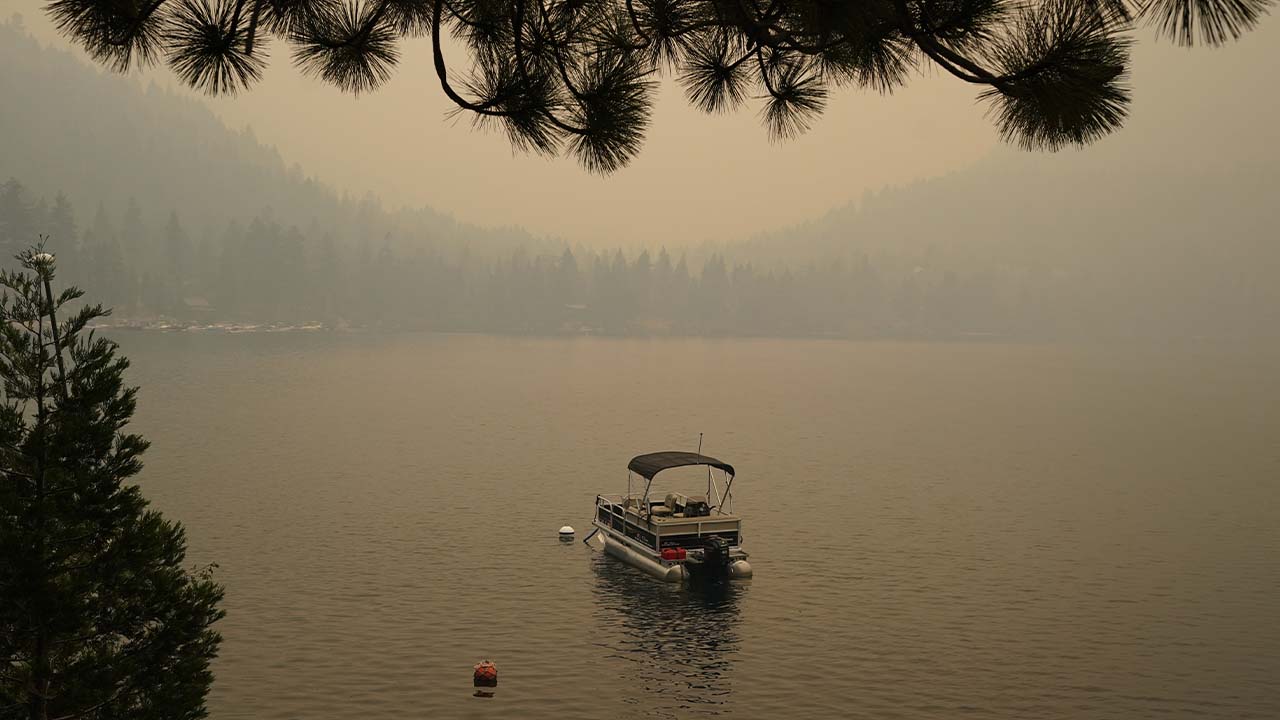 SOUTH LAKE TAHOE — A wildfire that gutted hundreds of homes advanced toward Lake Tahoe on Wednesday as thousands of firefighters tried to box in the flames and tourists who hoped to boat or swim were enveloped in a thick yellow haze of the nation’s worst air.

The Caldor Fire spread to within 20 miles east of the lake that straddles the California-Nevada state line, eating its way through rugged timberlands and “knocking on the door” of the Lake Tahoe basin, California’s state fire chief Thom Porter warned this week.

Ash rained down on Tuesday and tourists ducked into cafes, outdoor gear shops and casinos on Lake Tahoe Boulevard for a respite from the unhealthy air.

South Lake Tahoe and Tahoe City on the west shore had the nation’s worst air pollution at midmorning Wednesday, reaching 334, in the “hazardous” category of the 0-500 Air Quality Index, according to AirNow, a partnership of federal, state and local air agencies.

Community Contemplates Leaving Due to Smoke

Sitting at a slot machine near a window looking out at cars driving through the haze, Ramona Trejo said she and her husband would stay for their 50th wedding anniversary, as planned.

Trejo, who uses supplemental oxygen due to respiratory problems, said her husband wanted to keep gambling.

South of Tahoe, Rick Nelson and his wife, Diane, had planned to host a weekend wedding at Fallen Leaf Lake, where his daughter and her fiance had met. However, the smoke caused most of the community to leave. The sun was an eerie blood orange and the floats and boats in the lake were obscured by haze.

In the end, the Nelsons spent two days arranging to have the wedding moved from the glacial lake several hours southwest to the San Francisco Bay Area.

“Everybody’s trying to make accommodations for the smoke. And I think it’s becoming a reality for us, unfortunately,” Diane Nelson said. “I just think that the smoke and the fires have gotten bigger, hotter and faster-moving.”

Climate change has made the West warmer and drier in the past 30 years and will continue to make the weather more extreme and wildfires more destructive, according to scientists.

Although there were no evacuations ordered for Lake Tahoe, it was impossible to ignore a blanket of haze so thick and vast that it closed schools for a second day in Reno, Nevada, which is about 60 miles from the fire.

The school district that includes Reno reopened most schools on Wednesday, citing improved air quality conditions. However, the Washoe County School District’s schools in Incline Village on the north shore of Lake Tahoe remained closed, the district said in a statement.

The last major blaze in the area, during the summer of 2007, took South Lake Tahoe by surprise after blowing up from an illegal campfire. The Angora Fire burned less than 5 square miles but destroyed 254 homes, injured three people and forced 2,000 people to flee.

The Caldor fire has scorched more than 197 square miles and destroyed at least 461 homes since Aug. 14 in the Sierra Nevada southwest of the lake. It was 11% contained and threatened more than 17,000 structures.

The western side of the blaze continued to threaten more than a dozen small communities and wineries. On the fire’s eastern side, crews bulldozed fire lines, opened up narrow logging roads and cleared ridgetops in hopes of stopping its advance, fire officials said.

More than 2,500 firefighters were on the line and more resources were streaming in, including big firefighting aircraft, fire officials said.

“It’s the No. 1 fire in the country right now … there’s dozens of crews and dozers and engines and others that are on their way right now,” said Jeff Marsolais, supervisor for the Eldorado National Forest and an administrator on the fire.

The resources were desperately needed.

“This fire has just simply outpaced us. We emptied the cupboards of resources,” Marsolais said, adding that while the blaze had slowed its explosive growth in recent days, “that can change.”

Meanwhile, California’s Dixie Fire, the second-largest in state history at 1,148 square miles, was burning only about 65 miles to the north. It was 43% contained. At least 682 homes were among more than 1,270 buildings that have been destroyed.

Nationally, 92 large fires were burning in a dozen mainly Western states, according to the National Interagency Fire Center in Boise, Idaho.

Northern California has experienced a series of disastrous blazes that have burned hundreds of homes and many remain uncontained.

On Tuesday, President Joe Biden declared that a major disaster exists in California and ordered federal aid made available to local governments, agencies and fire victims in four northern counties ravaged by blazes dating back to July 14.