With Board Shake Up and $15 Million, Lawmaker Aims to Expand River Access 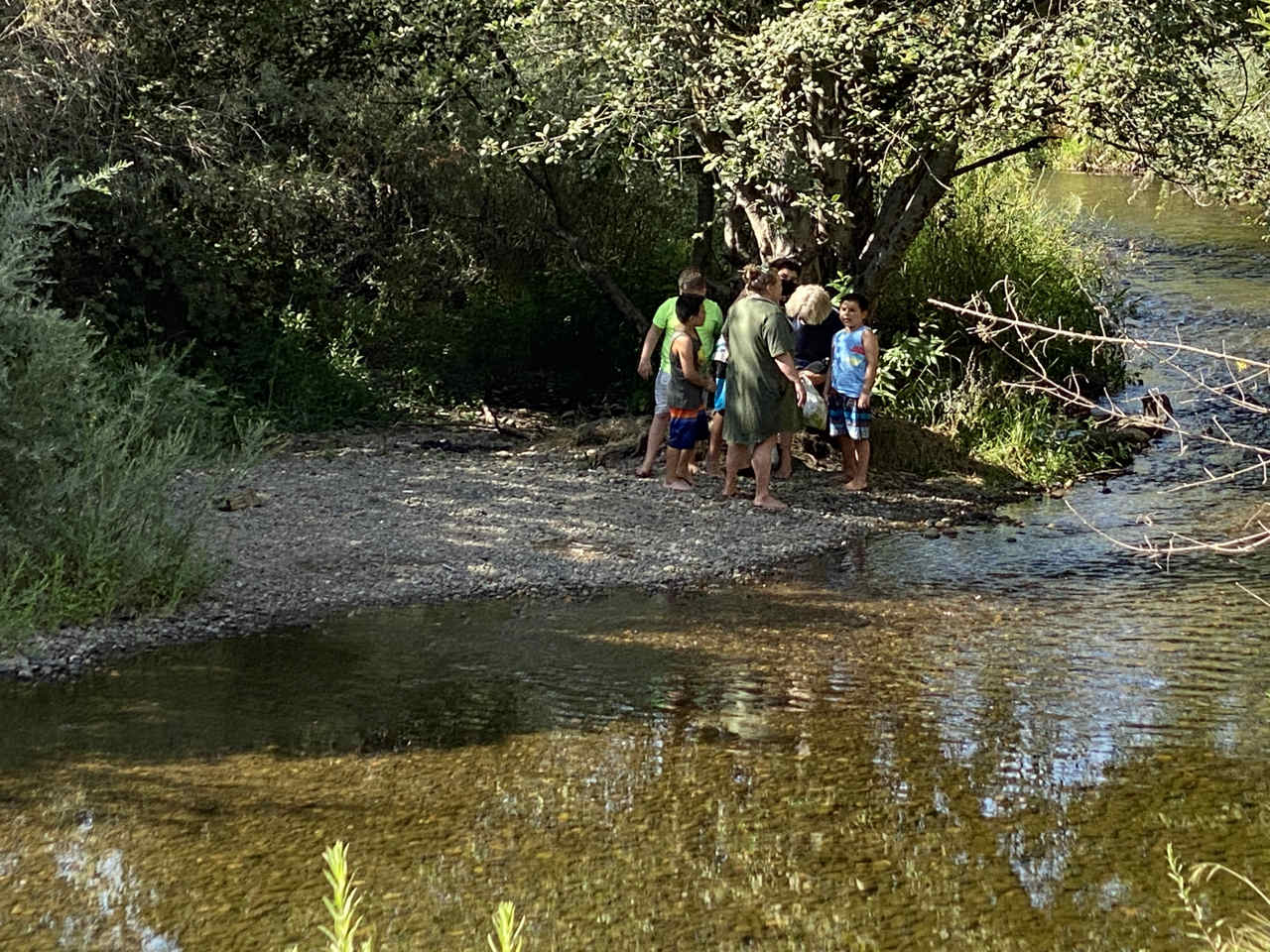 A group gathers on the bank of the San Joaquin River. (GV Wire/David Taub)
Share with friends

As a beaver and children played in the San Joaquin River, a Fresno assemblyman talked about changes he wants to see on the state board that governs access to the local waterway.

During a news conference to celebrate a $15 million allocation in the state budget for the San Joaquin River Conservancy board, Joaquin Arambula, D-Fresno, hinted at his concern with the current structure.

“We have looked towards this conservancy which has a mission of opening up 5,900 acres, but currently has only opened up just under a thousand acres to public access. That is important with these funds that are before us that we will have an opportunity for many of our communities of color to be able to access green spaces and to be outdoors,” Arambula said.

The board has been in turmoil for several years over where to build an access point to the waterway that separates Fresno and Madera counties. The 15-member group finally approved construction of a roadway and parking lot below the bluffs at Spano Park at the north end of Palm Avenue.

Arambula’s proposal, AB 559, would create two new positions on the board and eliminate one. It would also change the criteria of how local board members are selected. 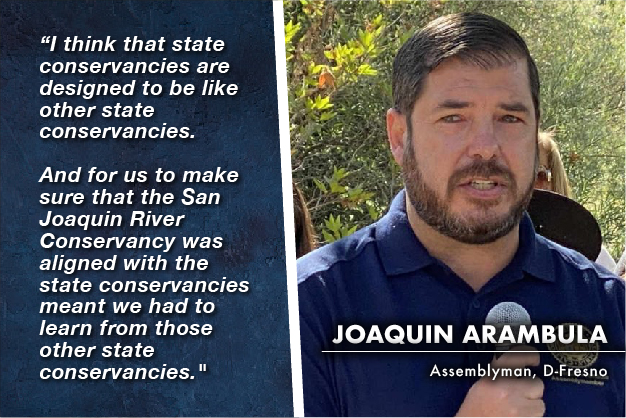 At the news conference, stakeholders praised the $15 million funding.

“This funding… is going to provide opportunities for that access instead of limited hours for parks and open space. We will be able to provide extended hours so that more families… will be able to come out and get healthy, walk and bike and have celebrations, family celebrations on the San Joaquin River Parkway,” said Sharon Weaver, executive director of the nonprofit San Joaquin River Parkway and Conservation Trust.

But, others think Arambula is selling out to Sacramento.

“I am glad that Assemblyman Arambula finally has an interest in the San Joaquin River, though I wish it wasn’t at the last minute once all the hard work has been done and with a willingness to sell our local interests to Sacramento for $15 million. Our independence and voice should be as priceless a treasure as the San Joaquin River,” Fresno City Councilman and SJRC board president Mike Karbassi said.

Arambula disagrees that the bill is taking away local control.

Both Karbassi and Brandau said they were not invited to Arambula’s news conference.

Not all local SJRC board members were concerned. Kacey Auston, representing the flood control district, said she hopes the legislation will increase participation from Madera County. She is not worried about local control.

More Color on the Board 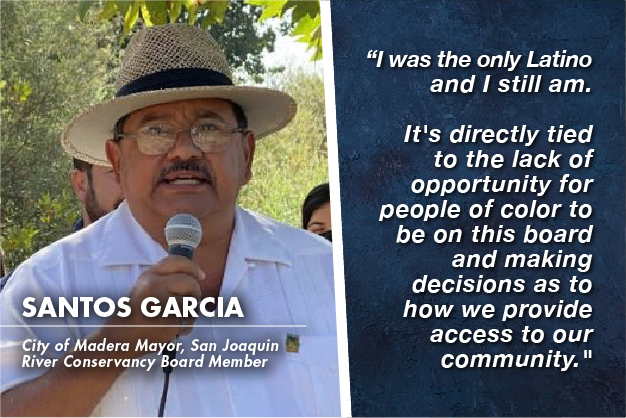 At Arambula’s news conference on the river, only one conservancy board member attended: Madera Mayor Santos Garcia.

He decried the fact he was the only member of color on the board.

“I was the only Latino and I still am. There are no Hmongs on the conservancy board. There are no African-Americans, there are no Punjabis. And it’s directly tied to the lack of opportunity for people of color to be on this board and making decisions as to how we provide access to our community,” Garcia said.

Arambula said his goal of adding two new positions is aimed at diversifying the board. The six state agencies also have a role in expanding representation for communities of color, he added.

GV Wire reached out to the six agencies with appointees on the board, but did not receive a response by time of publication.

A late change to the bill would also consolidate the appointees of the two regional water boards. Instead of each board appointing members, a single board seat would rotate between the two agencies every two years.

“I thought it was important, if we could, for us to consolidate the Fresno Metropolitan Flood District as well as the Madera Irrigation District, as they perform similar tasks, into one seat. Our adding to two new voices was important for us to diversify the opinions on the conservancy board by both adding a tribal nations seat and a youth seat for those between the ages of 18 and 26. I believe we provide a diversity of opinions now on the conservancy board,” Arambula said.

So why not consolidate the six state agencies with overlapping jurisdictions? 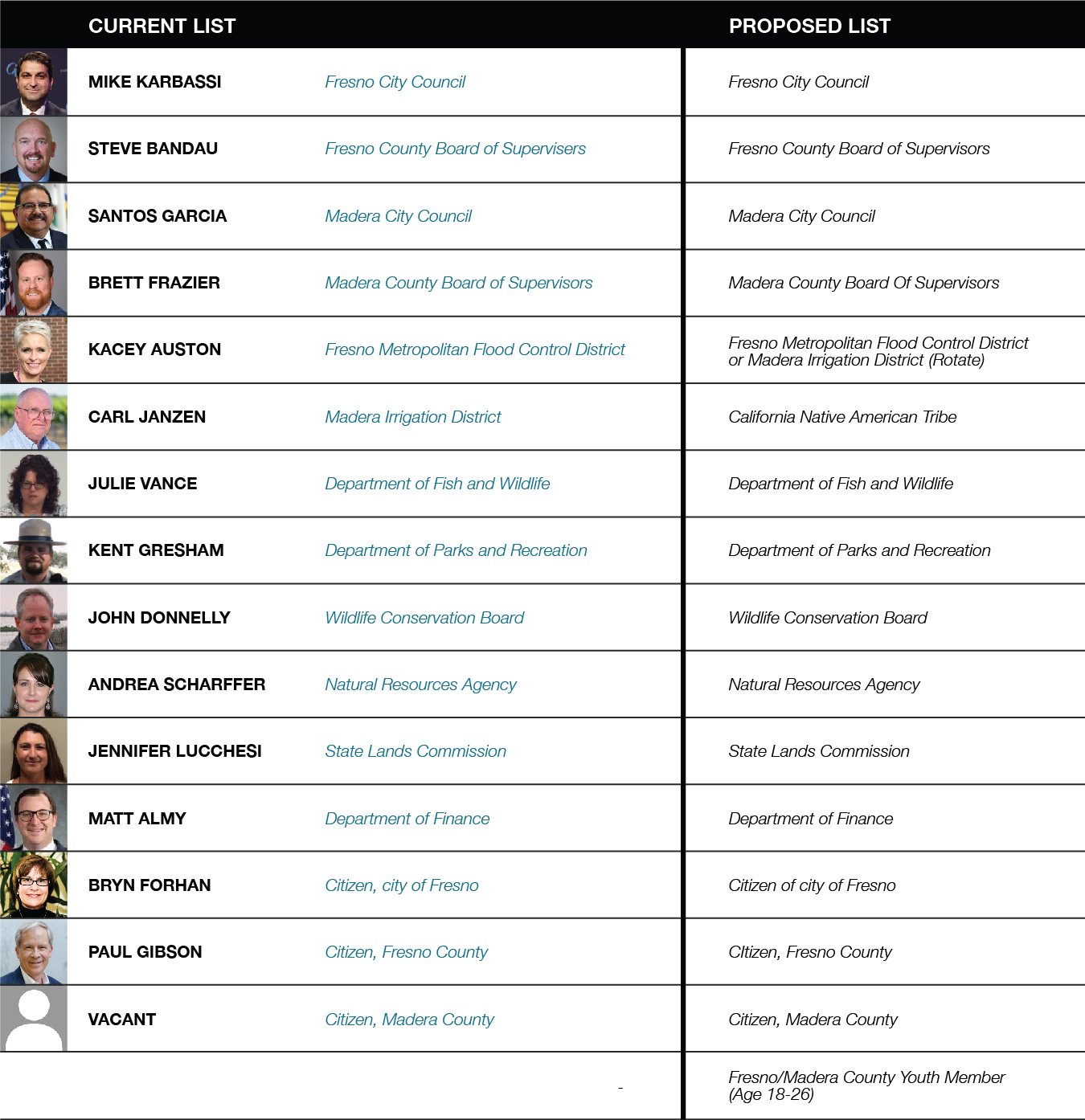 The three citizen positions include a representative of Madera County, Fresno County and the city of Fresno.

The governor makes the pick from names submitted by the respective county Board of Supervisors.

AB 559 changes the criteria of the nominees and who makes the pick. The county would now have to pick a name submitted by outdoor recreation, conservation, environmental justice, or social justice issues groups.

The Senate Committee on Rules would pick the Fresno County representative; the Speaker of the Assembly — currently Anthony Rendon, D-Lakewood — would pick the Madera County nominee. 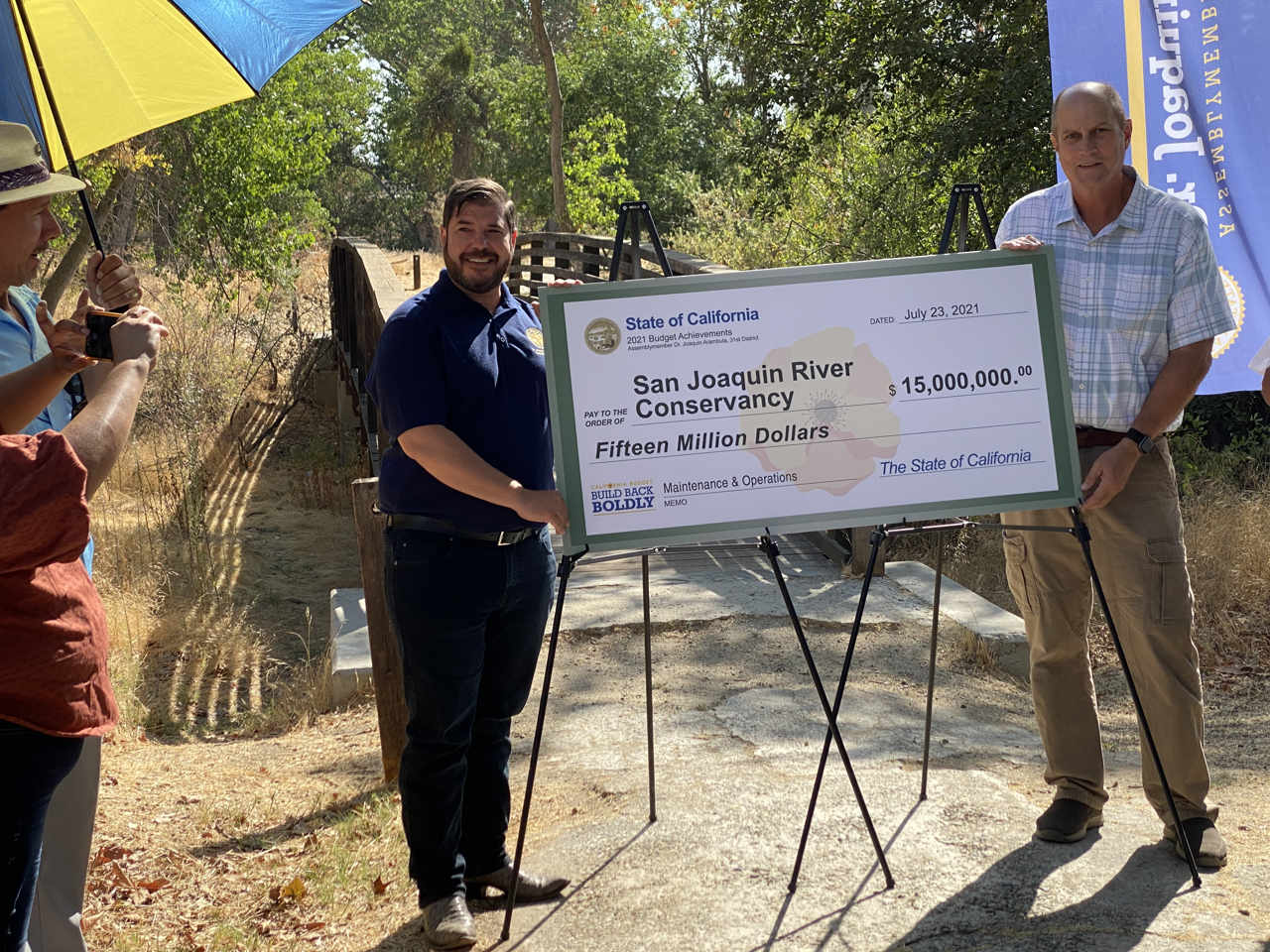 “We just needed to align it with where those state conservancies are,” Arambula said.

Like the San Joaquin River Conservancy Board, the other two river-related boards were created by the state legislature. Both have 15 members, a combination of local elected officials, state agencies and the public.

For the San Diego board, state agencies have five members, five are from local or regional governments, and five from the public picked by the governor (3), Senate Rules committee or Assembly speaker. The public members are not required to represent a specific constituency.

Arambula’s office said other conservancy boards’ public members are picked by the method, by either the governor, Senate Rules committee and Assembly speaker.

Arambula’s bill cleared the Assembly floor with a 56-17 vote on May 27. The two assembly members who represent both sides of the river, Frank Bigelow, R-O’Neals, and Jim Patterson, R-Fresno, voted no.

AB 559 is now in the state senate. It cleared the natural resources committee by a 7-1 vote. It is next scheduled for a hearing by the appropriations committee on Aug. 16. If it clears, the bill heads for the senate floor.

Senator Anna Caballero, D-Salinas, who attended Arambula’s news conference, said she supports the legislation. Melissa Hurtado, D-Sanger,  said she has yet to form an opinion.

In an update to when this story first published, the office of Sen. Andreas Borgeas, R-Fresno, sent this statement:

“As a former Chairman of the San Joaquin River Conservancy, the Senator certainly appreciates the operations and maintenance funding for the SJRC. Though there are some serious concerns from Fresno County and Madera County regarding the proposed change of composition to an even greater majority of State executive and gubernatorial appointments. The governing bodies of Fresno and Madera counties have representatives on the conservancy board who represent all stakeholders potentially impacted by the decisions of this governing body as opposed to narrow interest or stakeholder groups,” Borgeas said.

Update, 7/27/21: after publication of the story, the California Natural Resources Agency sent this statement:

“The California Natural Resources Agency supports the work of the San Joaquin River Conservancy. Our designee on the board helps to lead the Natural Resources Agency’s finance and budget team and is an expert on capital funding and project development, experience that is very helpful to the work of the conservancy. Across our agency, we continue to make progress diversifying appointees to boards and commissions to reflect California.”