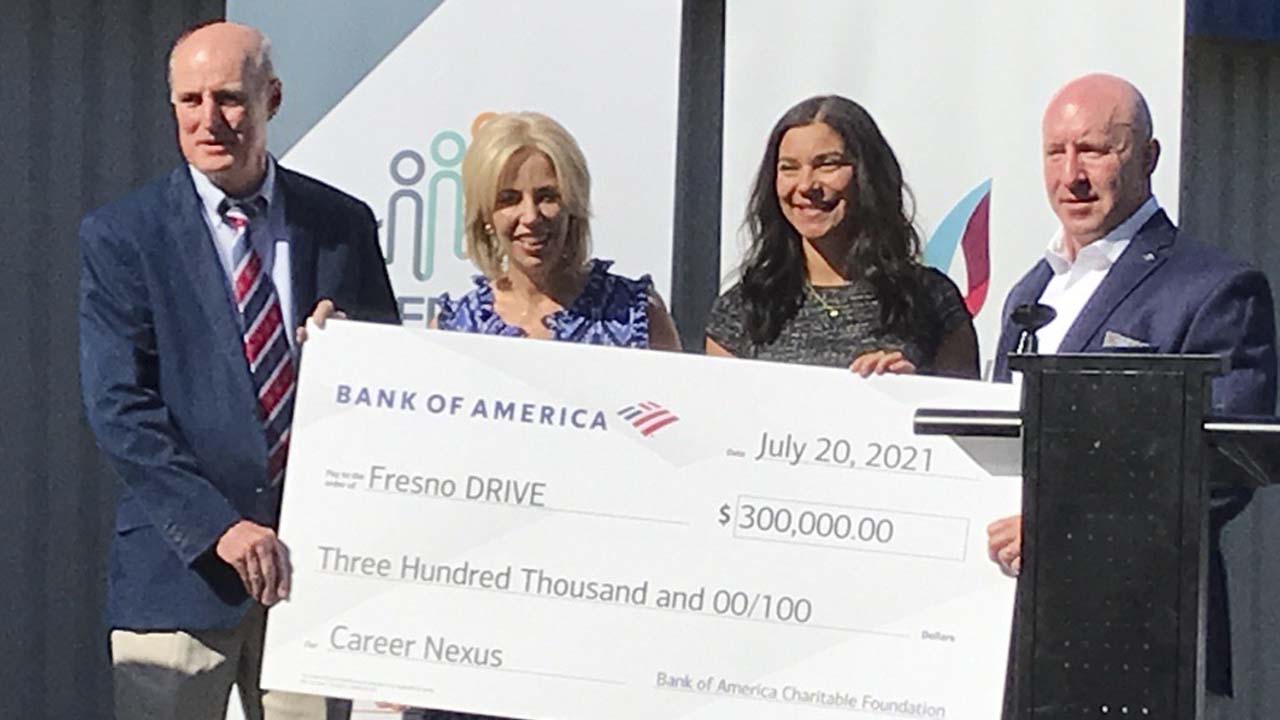 Career Nexus, a regional program designed to help young adults get paid for job training and move into the workforce, got a big shot in the arm on Tuesday morning.

Business, education, and civic officials gathered in east-central Fresno to hear that Bank of America has written a $300,000 check to Career Nexus, one of 19 initiatives in Fresno DRIVE, a 10-year community investment plan.

It’s the largest gift ever from Bank of America in its Fresno-Madera market.

The bank is committed to help the Valley improve its economic prospects by bankrolling much-needed job training to prepare workers for companies in need of a trained workforce, Riley said.

The bank’s donation is an investment in that effort, he said.

Madden said the gift not only will help expand the number of paid internships, but will signal other potential donors that Career Nexus is the real deal and worthy of their support.

“This is a leadership investment,” he said. “When you have somebody like Bank of America come in first with this kind of a statement, it allows us to go talk to others about similar types of investment.

“Something like this really makes a statement. Bank of America is a huge corporation, we all know the name, and when somebody like that invests this kind of money, it says it’s a worthy investment, and that helps us a lot.”

The event took place at PNM Company, a precision machine shop that had another reason to celebrate Tuesday — some of its components were part of New Shepard, the rocket that carried multibillionaire Jeff Bezos into a brief orbit earlier Tuesday.

Clovis Unified Superintendent Eimear O’Farrell might be finally getting a pay raise. The board of trustees will consider a recommendation to boost O’Farrell’s annual salary from $248,975 to $268,000, her first raise since 2017.

The board commissioned a study of superintendent salaries from the Central Valley (both Sacramento and San Joaquin valleys) and the Inland Empire, and determined that while Clovis Unified was the sixth largest among the 15 districts surveyed, O’Farrell’s salary ranked at No. 13 on the list — not exactly a lucky number.

By comparison, Fresno Unified Superintendent Bob Nelson collects an annual salary of $317,660, putting him third on the list behind the superintendents of Elk Grove Unified in Sacramento County and Corona-Norco Unified in Riverside County, according to the report by the Reward Strategy Group of San Diego.

Reward Strategy Group might want to recheck their numbers, however. The School District reported in February that Nelson’s annual pay was raised from $336,438 to $341,484.

If the board approves O’Farrell’s raise Wednesday, it will be retroactive to July 1.

But as the board giveth, it also taketh away: The contract revision will reduce the district-paid life insurance policy for O’Farrell from $1 million to $100,000.

A recent question-and-answer article in the Fresno State Magazine puts the spotlight on new president Saúl Jiménez-Sandoval, who talks about his passion and priorities for the university.

But the article also shows that in many ways, Jiménez-Sandoval is just like the rest of us. I don’t want to steal the magazine’s thunder by revealing too much, but let’s just say that if you are in need of help with installing double-pane windows or cooking crepes, he’s the guy to call.

And Speaking of the Need for More Education …

According to Wallet Hub, the Fresno area ranked near the bottom among the nation’s 150 largest metro areas for educational attainment, although it’s doing a better job than other parts of the country in closing the racial and gender gap among college students.

Wallet Hub reports in an online ranking that Fresno comes in 140th on the list overall, and appears at No. 144 for educational attainment (high school diplomas and college degrees).

But we’re much closer to the top of the list in another measure: Fresno ranks 34th out of 150 in the quality of college and university education and for closing the racial and gender gaps in education availability.