Illustrating the need to hold owners responsible for the safety of their vacant buildings, Fresno City Councilman Miguel Arias spoke to the media at an empty downtown building.

“Why is my building picked out as the blighted one? It’s not.” — Howard Biddlecome

“Behind me is a blighted commercial building that’s been boarded up for years,” Arias said Tuesday. “This year, we’ve had so far a dozen formal complaints and dozens of more complaints and calls that come in every week into our code enforcement department.”

Arias’s goal: an ordinance beefing up vacant building maintenance rules. He got his wish at Thursday’s council meeting on a 7-0 vote.

However, Howard Biddlecome, the owner of the historic Sample Sanitarium building at 311 N. Fulton Street, says he was unfairly singled out.

“Why is my building picked out as the blighted one? It’s not,” Biddlecome said.

Arias said the building has been subject to several fires.

Biddlecome counters that while his building may be empty, there is a fire protection system. By his recollection, there have only been two fires at the location in the 15 years of his family’s ownership. And, Biddlecome says he has responded to code enforcement citations.

Biddlecome’s family purchased the building in 2006, according to Fresno County records. Built in 1913, the building is on the local register of historic resources.

“This medical facility was later known as the Sequoia Hospital. It still serves as a major landmark in an otherwise residential neighborhood, despite having stood vacant for many years,” Historic Fresno says on its website.

It also served as an office building in the past but has been abandoned for decades, Biddlecome said.

Arias did not provide more information on the alleged complaints. Nor did the city provide records, as requested by GV Wire, before this story’s publication.

Trying to Find a Buyer

Arias said that he has tried to broker a sale of 311 N. Fulton, but the asking price is too high.

“We try to go for low-income housing. It’s not going to work. The building is not designed for it. It’s a long building. It’s almost like a railroad car, very difficult to put apartments in there.” — Howard Biddlecome

“We’ve met with the owner and neighbors several times to try and find some better solutions,” Arias said. “We’ve even brought buyers and investors to the owner’s attention because we recognize that he may not be able to be in a position to reinvest and improve this property, but others are willing to do it.”

That’s nonsense, says Biddlecome. Non-profits inquired, but they failed to get grants to buy the building.

“It’s very difficult to bring a business down there. And we’ve tried everything we could for that building,” Biddlecome said.

Arias said “the climate is perfect” for converting the building into an affordable housing project.

Biddlecome listed reasons why it is difficult to repurpose his property. 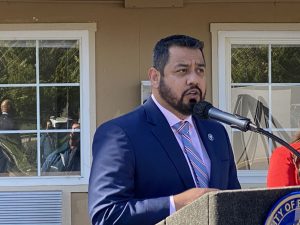 “It is costly for the property owner, but it’s necessary to ensure the safety of our firefighters if and when a building was to go up and fire. This building had had several fires.” — City councilman Miguel Arias

“We try to go for low-income housing. It’s not going to work. The building is not designed for it. It’s a long building. It’s almost like a railroad car, very difficult to put apartments in there,” he said.

“If Miguel Arias thinks it is this easy, don’t you think that we would have developed it as developers?”

Biddlecome said private development has moved away from downtown and toward north Fresno. He would like more support from the city with development costs.

The council approved Arias’s ordinance without debate. It requires owners of vacant buildings to secure the building, have fire suppression systems, and upon request tell the city of their intentions.

“It is costly for the property owner, but it’s necessary to ensure the safety of our firefighters if and when a building was to go up and fire. This building had had several fires,” Arias said.

However, Biddlecome insists his building is not the problem.

“Miguel Arias wants to blame me for all the ills of this downtown. That’s not fair. It’s not. If you look on my building and you saw the press conference, right behind him are knee-high weeds that the state of California (is responsible for). Didn’t do a thing,” Biddlecome said, referring to the land between his building and the highway that the state is supposed to maintain.