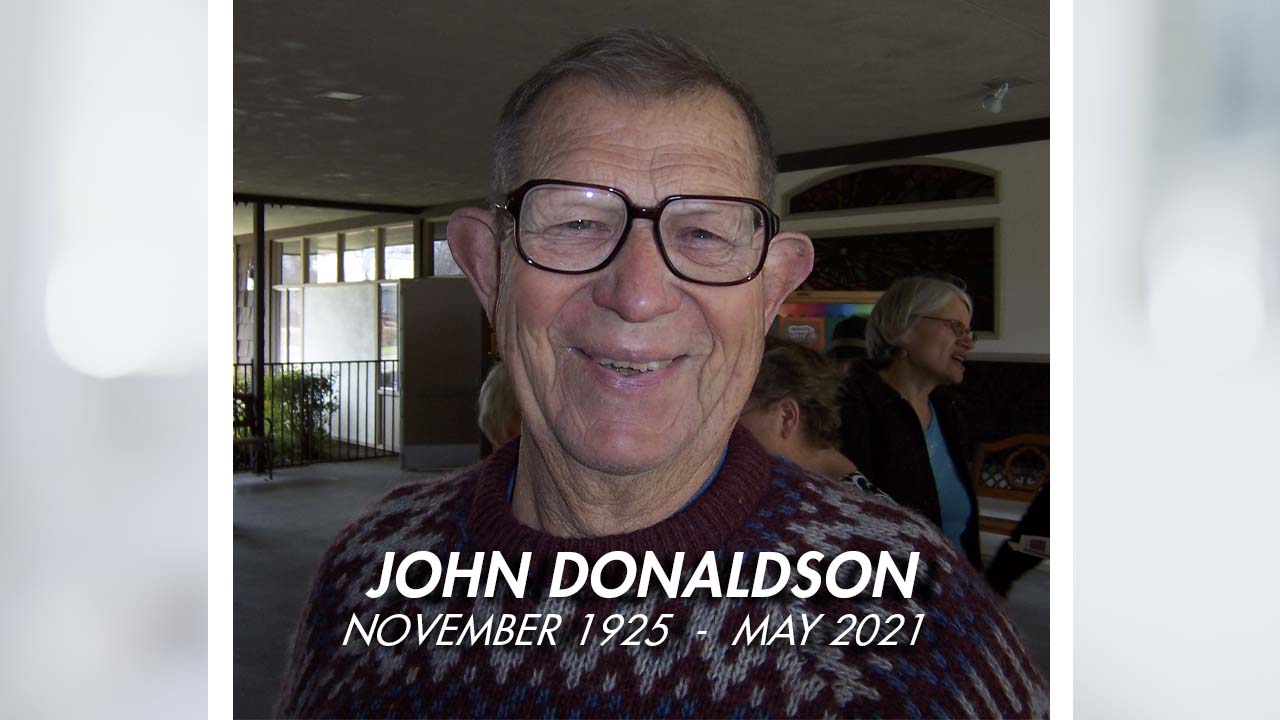 Dr. John Donaldson was many things to many people.

To his students at Fresno State, he made physics and astronomy come alive. To his fellow musicians at the Fresno Community Chorus, his bass voice produced the low C that rumbled below the other voices, completing the harmonic whole. To budding politicians, he was a consummate public servant who helped redirect the Fresno County Board of Supervisors to more careful planning.

Dr. Donaldson’s long and illustrious life ended Sunday after a short illness. He was 95.

Longtime friend Philip Fullerton described Dr. Donaldson as a Renaissance man and said Monday that he was “devastated” by his death. Fullerton said he first met Donaldson in 1958 at their church, then called College Community Congregational and now the Community United Church of Christ.

“His being here, being part of our lives … we’re all blessed by that,” said Fullerton, a retired local attorney.

Excelling Was in His Nature

Dr. Donaldson was known as much for his trademark bow ties and towering height as for his calm demeanor and friendly attitude toward all.

According to a church biography, news stories, and Fullerton’s recollections, Dr. Donaldson grew up in Houston, Texas, and earned his bachelor’s in 1945 and master’s degree in 1947 from Rice University. His mother had earned a bachelor’s from Rice in 1922, just a few years before his birth in November 1925.

Dr. Donaldson competed on Rice’s track and field team and in 1945 won the AAU championship for discus with a throw of 151 feet. He won the Bob Quin Award in 1946 for Rice’s most outstanding male athlete and competed at the Olympic trials for discus in 1948.

Dr. Donaldson earned another master’s and a Ph.D. in physics from Yale University in 1949. In 1951 he was an AAU All-American in volleyball, a sport that he would later play in Fresno in friendly matches.

After earning his doctorate, Dr. Donaldson worked a few years at the University of Arizona as an associate professor of physics, and then was drafted by the Army in June 1954 and worked at Fort Detrick, Maryland. After leaving the service, Dr. Donaldson decided to take a physics teaching job at Fresno State because he and his wife were enamored of Yosemite and the hiking opportunities in the west.

Music Was a Great Love

A love of music drew Dr. Donaldson to direct a choir at a Methodist church in Maryland. After moving to Fresno, he joined Community UCC in 1956 after seeing a story about the new church needing a choir director. He would direct the choir there for many years and sing.

Some might have considered a church choir to be an unusual location for Dr. Donaldson, a self-described atheist. But he related in a Community UCC member biography that music gave him a connection to religion: “I had a marvelous course at Rice on the philosophy of religion, and I was embarrassed early in the class that I didn’t realize Genesis has two separate creation stories, and they differ considerably. It opened my eyes. But I can happily sing about things I don’t believe in. Somehow, in music it’s different. I know it’s a strange conflict, but I’ve learned to live with it.”

Dr. Donaldson was one of the founding members of the Fresno Community Chorus since its launch in 1956 and was a mainstay of the bass section. The chorus’s current conductor and artistic director, Dr. Anna Hamre, said Dr. Donaldson was an amateur in name only. He studied scores and prepared parts for singers and instrumentalists for his church choir.

When the chorus was short on funds, Dr. Donaldson typed or performed other tasks as needed. Hamre recalled watching Dr. Donaldson leave the bass section during one concert and pick up a percussion instrument.

“I once asked him, ‘John, with all your skills, why didn’t you choose music as your major?’ He said it was because he felt that ‘others could hear things I couldn’t hear.’ ”

Whether making music or serving the organization that made it, Dr. Donaldson was equally comfortable as a leader and a team player, she said. He served on the chorus board for many years and was an emeritus board member at the time of his death.

While still teaching at Fresno State, Dr. Donaldson entered a new career phase with a successful run for the Fresno County Board of Supervisors in 1972. He was considered a reform candidate whose goal was to make sure that land-use decisions benefitted the community and not just local developers. He had a reputation for honesty, and for his custom of returning Christmas gifts sent by local developers.

Dr. Donaldson was a role model and mentor for former Fresno City Councilman Tom Bohigian, who was in high school and college during Dr. Donaldson’s two terms as supervisor.

“It may sound trite, but he really was a giant,” Bohigian said. “I looked up to him, literally and figuratively.”

Dr. Donaldson brought his concerns about the environment and planning for future growth to his elected office, always considering how his decisions and the decisions of the board would impact future generations, Bohigian said. And as a result of his service, alongside the other reform-minded supervisors John Krebs and Armando Rodriguez, “Fresno County was changed for the better,” he said.

While conflict appears to be the rule, not the exception, for many politicians these days, Dr. Donaldson treated everyone with respect and was friendly to all — even those he disagreed with, Bohigian said.

(If he had any pent-up aggression, perhaps he dispelled it during the volleyball matches where he was known for his fearsome spiking abilities.)

Dr. Donaldson taught at Fresno State for 35 years before retiring as professor emeritus, but he continued to volunteer with stargazing events at the university’s observatory.

When he wasn’t running county government, teaching classes, or making music, Dr. Donaldson was roaming the Sierra on backpacking trips and on trips around the world with his beloved wife, Shirley, who died in 2006 from Alzheimer’s disease.

Dr. Donaldson reunited years later with Ruth Reynolds, whose husband Joe also had died from Alzheimer’s, and Dr. Donaldson and she were partners until her death in 2017.

The years took their toll, and Dr. Donaldson could no longer engage in athletics. But he continued to sing in his church choir and with the Fresno Community Chorus (now the Fresno Master Chorale). Because of his infirmities, he could no longer stand throughout concerts but sung while sitting tall in front of the chorus.

His favorite piece of classical music, Bach’s Mass in B minor, was one of the classical works his caretakers played Sunday as Dr. Donaldson slipped into death, Fullerton said.

Although greatly saddened by the loss of his friend, Fullerton said he and all who knew Dr. Donaldson will have their cherished memories of him, as well as the knowledge that “we’re stronger, and better, because of John.”