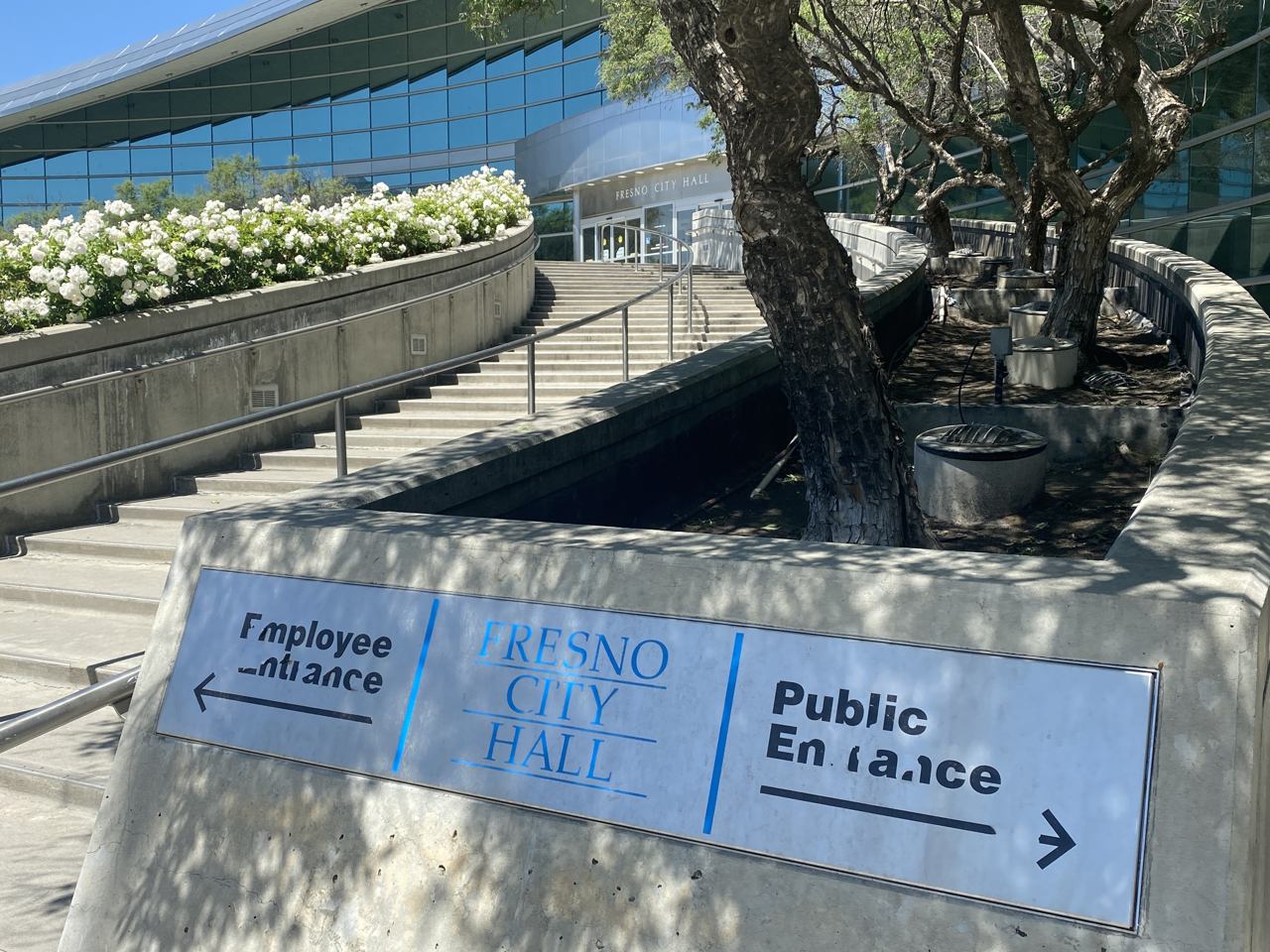 On a day where the Fresno City Council debated how to make its business more transparent, the public was shut out from attending in-person.

For the second consecutive meeting, the city’s council chamber was opened to councilmembers. But despite language in a city order authorizing the public to attend in-person as well, City Hall security did not allow anyone from the outside to enter.

Emergency Order 2020-19, which went into effect last June, says, in part, “City Hall shall remain closed to the public except for public participation during meetings that take place in Council Chambers. All City officials and employees may participate electronically. No other in-person public services shall take place in City Hall at this time.”

City Manager Thomas Esqueda said allowing the public in to council meetings again is a work in progress.

“We’re still trying to transition back to opening the building, occupying the chambers. It’s just a lot of lessons learned right now. So before we let people back into the building, we need to make sure we can create a safe environment. We’re trying to make sure it’s safe for the staff and in the council right now … figure out how to be good at that,” Esqueda said.

He added that council staff and department heads participated remotely.

Councilmember Mike Karbassi said there is an adjustment period.

“We are just easing into being there in person. We just want to make sure we do things the right way,” Karbassi said. “I’d like it to be open, but I think it’s a it’s a conversation we have to have with the council president.”

Council President Luis Chavez did indicate at one point that the chamber would be open to the public last week. That has not come to pass.

The public has been able to participate via Zoom since the chamber was closed in March 2020. All council meetings have been broadcast electronically.

A Debate About Transparency

Karbassi and Councilmember Garry Bredefeld want to expand the state’s open meeting laws to council committees. They argued that it would allow a free flow of information, especially on spending federal COVID relief act dollars.

“This is really meant to be a reform measure. I think more transparency is not a bad thing, but that’s really what this comes down to. It’s just making sure every one of us has access to information so we can make responsible decisions,” Karbassi said.

The Brown Act, the state’s open meeting law, restricts private conversations about legislation among councilmembers to just three at a time (less than a majority of the seven-member body). Committees are comprised of three councilmembers.

“Bad things were done under this premise of subcommittees,” Bredefeld said. “There are people who got awards to do contact tracing who have no experience in contact tracing. None. But they got millions and millions of dollars. But I think people have some cozy relationships with some of those folks. And I think it’s a corrupt process. I don’t want that to happen anymore.”

Councilmember Miguel Arias responded by saying contracts were awarded on an emergency basis because of the COVID-19 emergency. The full council ultimately approved the contracts.

Others Question Costs of Proposals

Other councilmembers questioned the costs of applying Brown Act requirements and whether the rules would slow down the process of refining and passing local laws.

Arias said requiring all committee meetings to comply with the Brown Act would create new costs to staff the meetings, and to ensure they are available via video and translated for non-English speakers.

Karbassi describe those requirements as the cost of doing business.

Councilwoman Esmeralda Soria suggested professionalizing the committee system, similar to processed used at the state and federal level. If legislation doesn’t make it past the committee level, Soria said, it would not advance to the full council.

With only seven members, Councilmember Nelson Esparza said the Fresno City Council may be too small for the proposed ideas to be effective.

Chavez asked to delay a decision on the proposals to allow time to consult with the city’s administration. The council agreed with Chavez, who expects to bring the proposal back for further discussion in a month.