Unique 747 Aircraft That Fought Massive Creek Fire is Grounded, May Be Sold Off 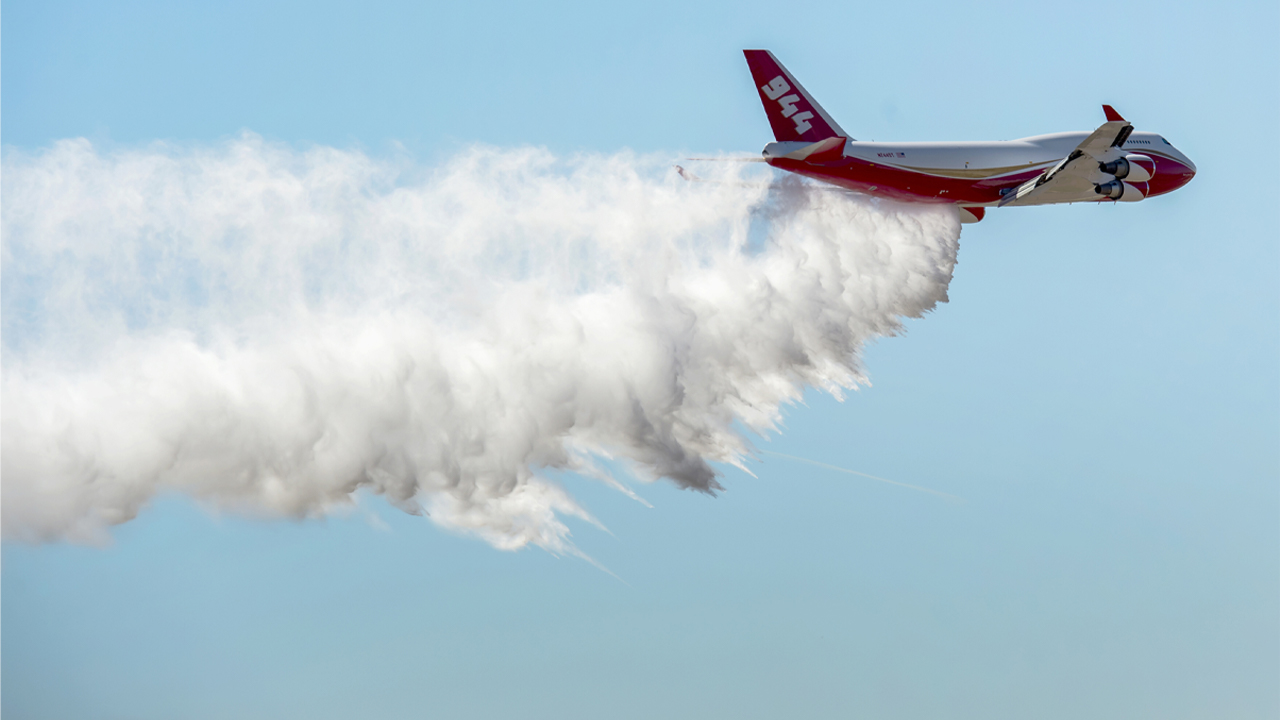 As California and other western states prepare for this year’s wildfire season, the world’s largest firefighting plane has been grounded and could be converted to help fight against another crisis, the COVID-19 pandemic.

After investing tens of millions into upgrading the Global SuperTanker and its technology, the revenue coming mostly from contracts with the U.S. government and California did not produce enough profit for the company to continue the funding the tanker, said Roger Miller, managing director at Alterna Capital Partners LLC, the investment company that owns the plane.

The unique 747 aircraft was deployed to help fight the massive Creek Fire in Fresno and Madera counties in September 2020.

Alterna’s decision to ground the SuperTanker was made on April 19, according to the firm, which had funded the plane’s operations and upgrades since 2016. Since the announcement, the Connecticut-based firm has received several offers to buy the SuperTanker and turn it into a freight carrier aircraft, Miller said.

“The COVID crisis has led to a huge boom in the aircraft freighter market flying around PPE, flying around vaccines, just all the stuff that you can’t afford to put on a ship and wait 45 days to get,” Miller said.

The investment firm is open to potential investors who want to continue using the SuperTanker for wildfire response, but if freight companies present a more attractive offer, the firm will sell it to them, Miller said.

To Continue Wildfire Operations, Willing Investor Must Step Up Soon

In order for the SuperTanker to be ready for the 2021 wildfire season, the plane would have to undergo a federal certification process by June, said Dan Reese, president of Global SuperTanker Services.

As the company weighs its options, two Washington state legislators sent a letter Tuesday to U.S. Congress members in Western states, urging them to find a solution to continue the SuperTanker’s operations, which they described as the “biggest and one of the best weapons in battling the catastrophic fires.”

“Our time is limited, through this week,” they wrote. “A willing buyer, a group of investors or government loan guarantees is needed to step up and help protect our livelihoods, economy, and environment against this devastating enemy.”

During the 2020 season, there were 58,950 wildfires that burned over 15,816 square miles, according to the National Interagency Fire Center in Idaho.

The Global SuperTanker is one of several Very Large Airtankers used to fight wildfires from above by dropping fire retardant and water. Water is dropped on the fires, and fire retardant is commonly dropped next to or around the fires as an extra line of defense. Once the retardant dries, it denies oxygen to the vegetation to prevent the spread of fire.

Concerns Regarding Expense of Retardants

But some fire experts, like Andy Stahl, executive director at Forest Service Employees for Environmental Ethics, are skeptical about the use of tankers and retardants for wildfire response because of the dangers that aerial firefighting poses, the specific environmental factors needed to operate the tanker and the overall expense of retardants.

Stahl said that fire retardant is “used not at all or only incredibly rarely” in the Midwest or on the East Coast. Fire retardant, he said, is a Western state phenomena because there are more federal lands and the U.S. Forest Service has the money to spend on retardants, which Stahl says is “more expensive than dropping Perrier out of airplanes.”

In 2020, the federal government and state agencies dropped over 56 million gallons (211,983,060 liters) of retardant, which costs on average $3.10 per gallon, according to the National Interagency Fire Center.

“The retardant contracts are very profitable for a small group of very influential firefighting companies and for the bureaucracy that uses them. The retardant is a wonderful way of showing the concerned public that were really trying hard to protect their homes,” Stahl said.

But Michael DeGrosky, chief of the Protection Bureau at Montana’s Department Of Natural Resources and Conservation, said there is a time and place for effective retardant use.

“Like all tools, you need to use the right tool in the right situation,” DeGrosky said. “My personal experience is that retardant is most effective on initial attack. It can be used very effectively when you’re trying to guide a fire and draw it away from homes and property.”

Other Very Large Airtankers can carry up to 8,000 gallons of fire retardant, according to the U.S. Forest Service.

The Global SuperTanker can dump up to 19,200 gallons of water or flame retardant in six seconds and fly as low as 200 feet above the ground to do its work. It can be refilled in just 13 minutes.

“There’s always the possibility that by having it unavailable in California or Oregon where it’s typically operated, you know, that may put other pressures on the system. Aircraft we rely on might be committed there, but we don’t see any direct impact,” DeGrosky said of Montana’s wildfire response.

Officials from Montana and Washington said they would ensure access to additional planes and helicopters through their state fire department’s and regional and national contracts for other aircrafts for the upcoming season.

The SuperTanker has also been deployed in Israel in 2016 and in Chile in 2017. The company declined to say how much the SuperTanker costs per day.

Related Topics:fire season
Up Next

Scientist: Extent of DDT Dumping in Pacific is ‘Staggering’