Fresno Gets 'F' Grades in Air Quality Again, but Is Any Progress Being Made? 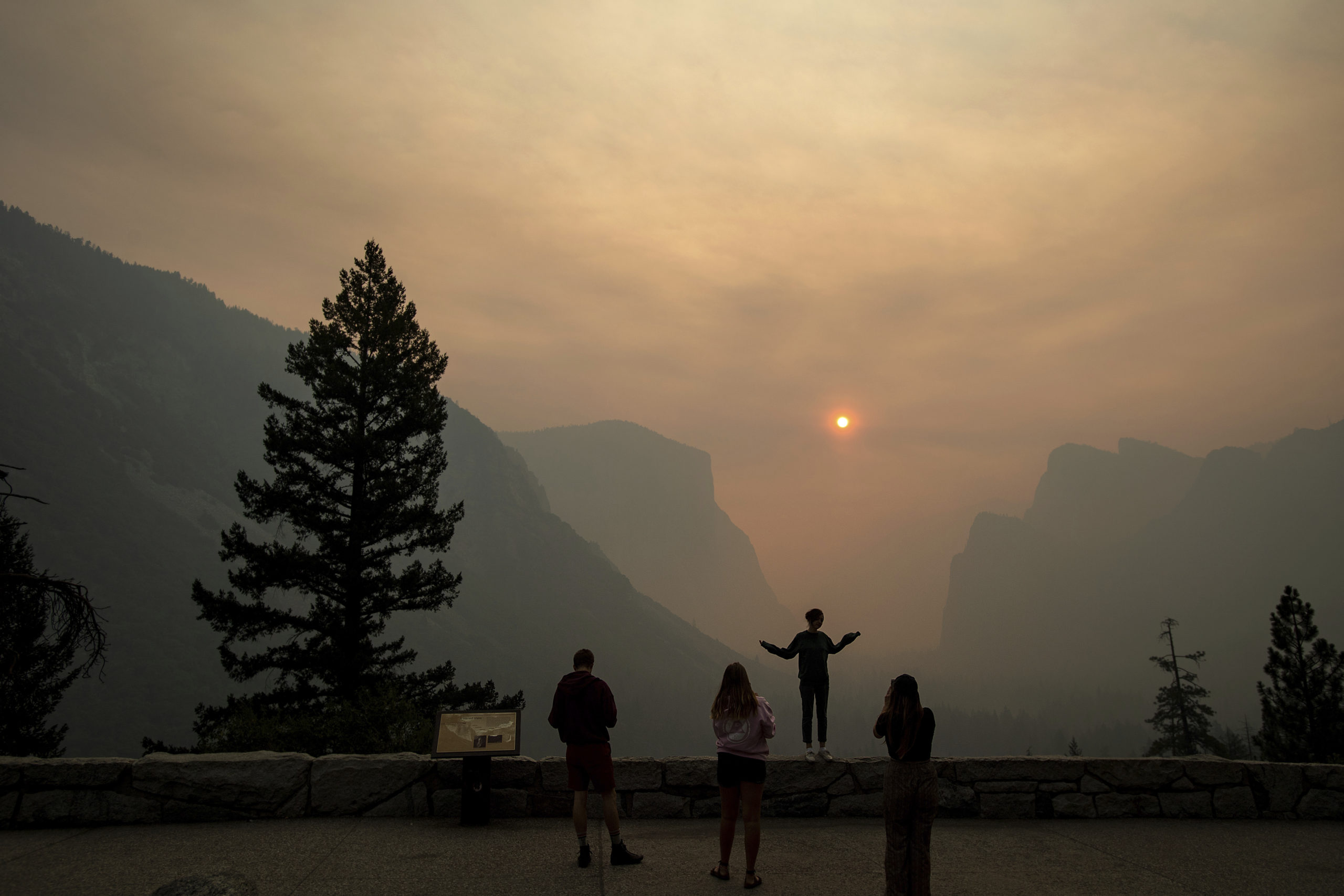 The American Lung Association’s “State of the Air” 2021 report finds that despite some nationwide progress on cleaning up air pollution, more than 40% of Americans—more than 135 million people— are living in places with unhealthy levels of ozone or particle pollution.

As usual, Fresno County gets very low marks for air quality. But, there is a silver lining when looking deeper into the data.

Fresno County gets “F” grades for the following:

“What you’re breathing on a daily basis in the San Joaquin Valley continues to improve,” says Jaime Holt, chief communications officer for the San Joaquin Valley Air Pollution Control District. She says totally phasing out ag burning over the next 4 to 5 years will also play a significant role in improving air quality. 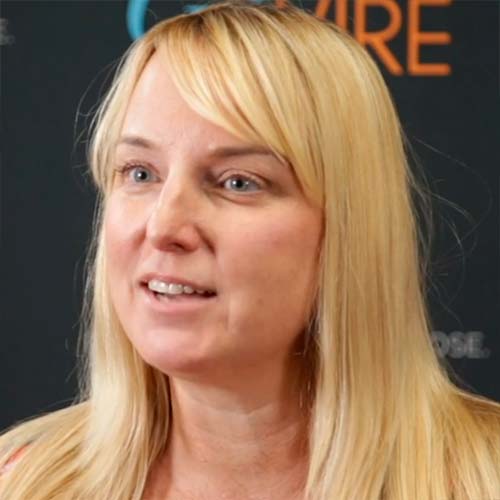 Dramatic Improvement Over Past 2 Decades

The trends in the report on Fresno County show a pretty dramatic improvement in all areas from the early 2000’s until now.

“I think it’s been a combination of all the programs that we’ve had which include ‘check before you burn’,” says Fresno County Supervisor Buddy Mendes, who also serves on the air district board. He says the retrofitting that’s been done in the ag industry to convert fuel burning engines to electric ones has also helped.

Los Angeles remains the city with the worst ozone pollution in the nation, as it has for all but one of the 22 years tracked by the “State of the Air” report.

Geography and Weather are Factors

“We’re a perfect example of how to create and trap pollution because of our topography and meteorology,” explains Holt. “We just really struggle when it comes to air pollution because the little bit of pollution that we make tends to get trapped here and it doesn’t really have any place to go.”

Holt says what’s really interesting about this year’s report is that much of California received the same grades due to the tremendous impact wildfires had on the entire state.

Nevertheless, she points to incentive programs and a shift in mentality when it comes to cleaner-burning vehicles that continue to work in the Valley’s favor. 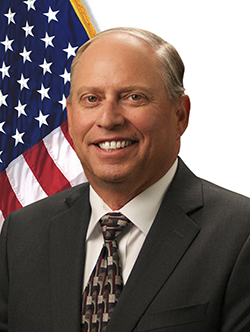 “I think it’s been a combination of all the programs that we’ve had which include ‘check before you burn’.”–Fresno County Supervisor Buddy Mendes

“Looking back about 30 years ago when we had ozone measurements across the valley, we’ve seen over a 90 percent reduction in days when we’ve had those high ozone concentrations,” points out Jon Klassen, SJVAPCD’s director of air quality science and planning. “We’re going to continue to make that progress with all the efforts that we’re making.”

Klassen specifically points to incentives offered by the district to business to reduce their emissions.

Some of the grants currently offered on the air district’s website include:

Holt says there’s been an 85% reduction in what she calls ‘stationary’ sources of emissions. Those would include fireplaces, or some sort of industrial operation.

The big challenge now is the ‘mobile’ sources of emissions.

“Your heavy duty diesel trucks, and some of your older vehicles,” explains Holt. She says the air district has a robust grant program that looks at either taking those off the road or repairing them to reduce their emissions. 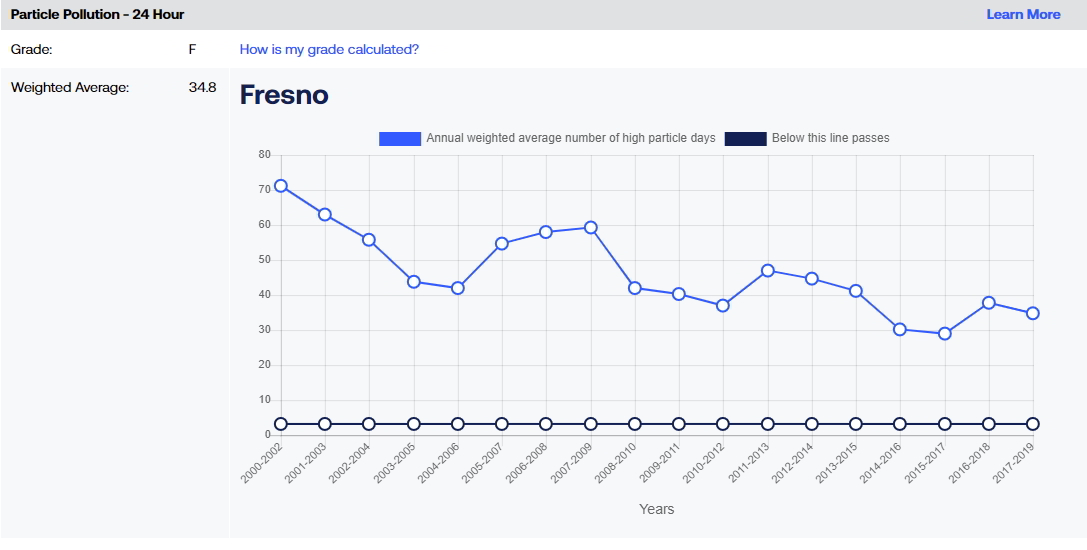 Compared To Other Parts of the World

Even though air pollution in the San Joaquin Valley can be at times some of the highest in the United States, other parts of the world are much worse.

“China, India, and portions of the Middle East and Asia can be significantly higher,” says Klassen. “Maybe you’ve seen some figures of annual average PM 2.5 in other parts of the world, and it can be like 10 times higher than what we see here.”

Klassen says the stark contrast can be even higher on the other country’s worst days.

Cities in the Western and the Southwestern U.S. continue to dominate the most ozone-polluted list. California retains its historic distinction of having the most cities on the list, with 10 of the 25 most-polluted cities.

Bakersfield is behind Los Angeles as the second most polluted area in California for ozone. Visalia follows, and the Fresno/Madera/Hanford area comes in at number 4. 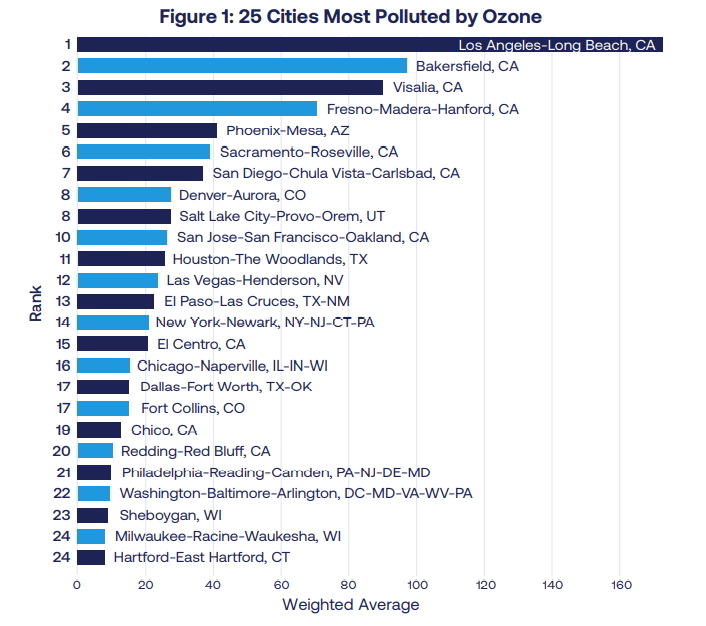 The list of the 25 worst cities for short-term particle pollution is very similar to last year’s report, with minor shifts in rank-order. The exceptions are Salt Lake City, which improved dramatically from 7th worst to 17th worst; Salinas, which improved enough to be removed from the list; and Lancaster, Pennsylvania, which returned to the list for the first time since the 2018 report.

Thirteen of the 25 most-polluted cities improved and had fewer unhealthy air days than in the 2020 report. However, as a general rule, improvements were modest, and all of these areas remained seriously polluted. For example, Bakersfield, though the only city among the worst 25 that improved to its best ever, nevertheless ranked third worst in the nation. 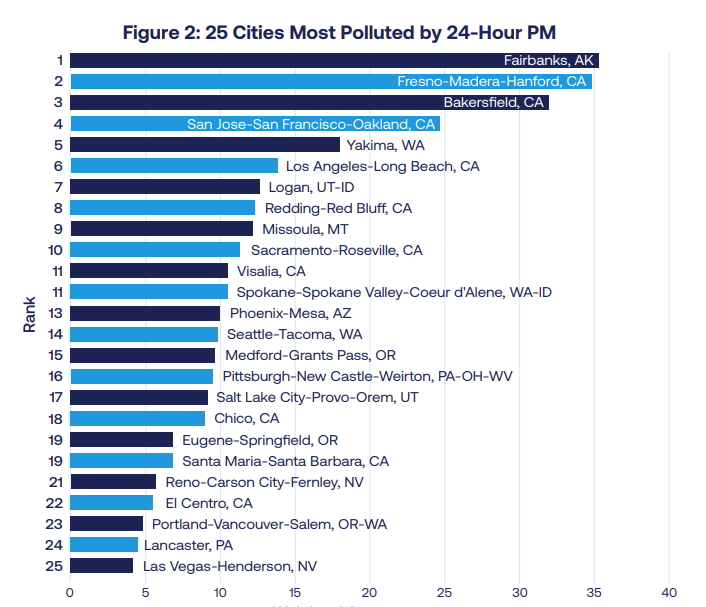 The number of people living in counties with unhealthy levels of year-round particle pollution is slightly smaller than in last year’s report, but higher than in reports published in 2017, 2018 and 2019. 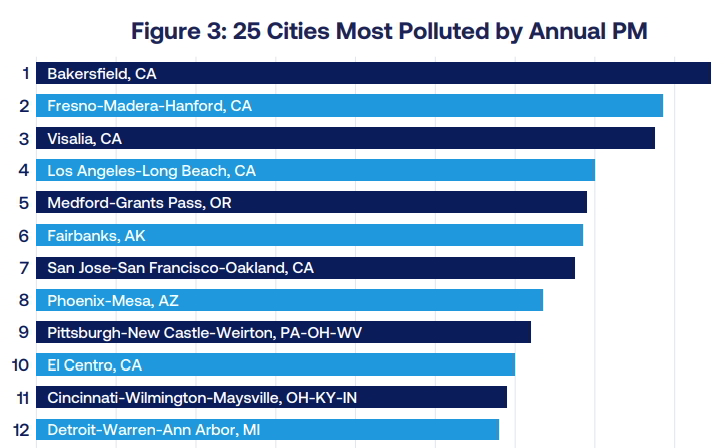