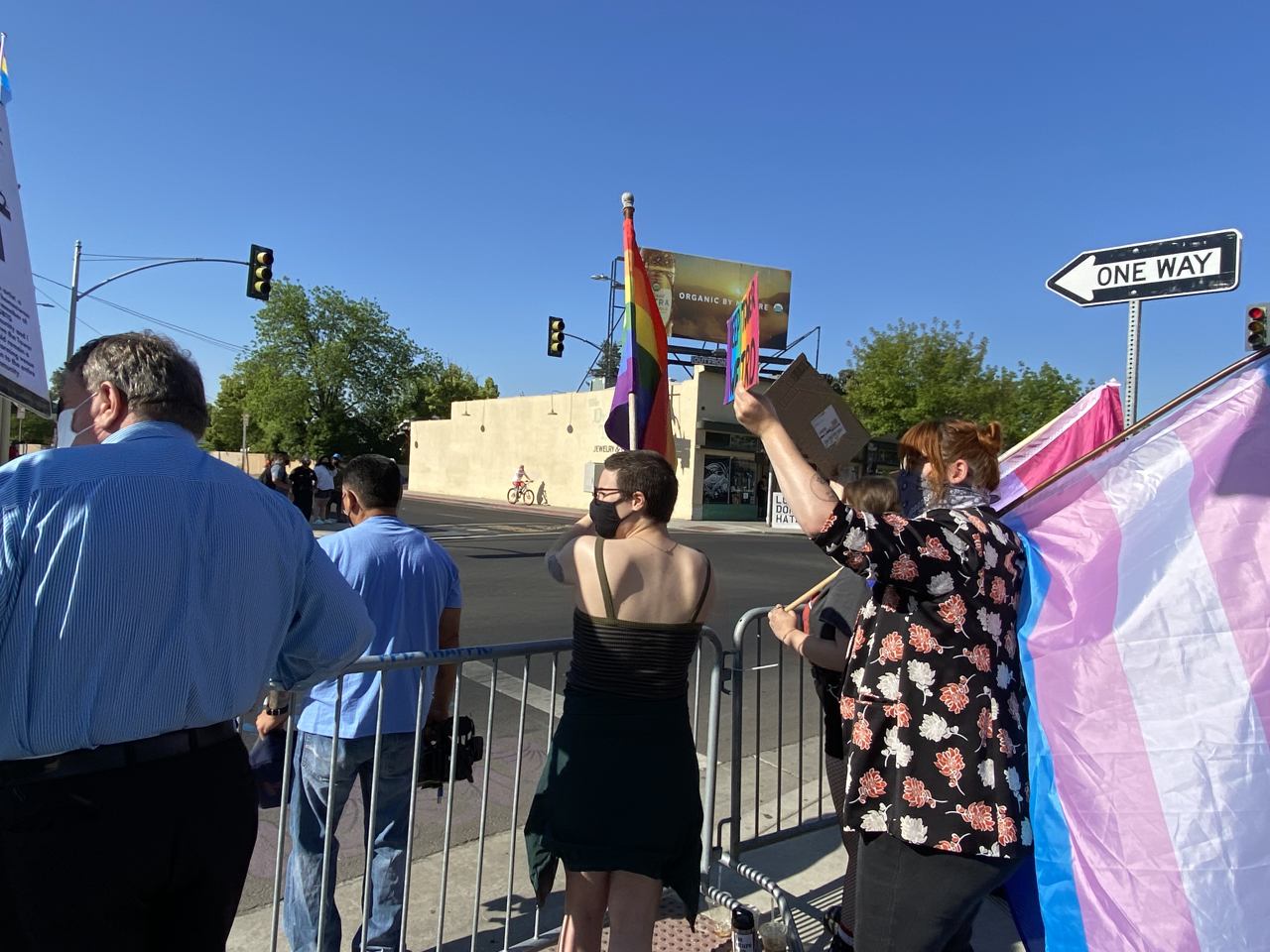 A plan by Fresno police to separate opposing groups of demonstrators during a weekly Tower Theatre protest seemed to work on Sunday. With the clashing sides placed behind barricades and on opposite sides of the street, there were no physical nor verbal skirmishes that have marked the demonstrations in the past.

Barricades were placed on the edge of the sidewalks on the northeast and northwest corners of Olive and Wishon avenues. Wishon was closed to traffic in front of the theater.

More than 100 people showed up to join with the Save the Tower Theatre Demonstration Committee in protest over the sale of the iconic venue to Adventure Church. As they have in the prior three months, they carried signs, waved flags and played music.

About 10 counter protesters showed on the other side of the street. None were wearing traditional clothing of the Proud Boys — a far-right group that has clashed with the Save the Tower demonstrators for the last several weeks.

Also gone were protesters wearing tactical vests or carrying any visible weapons such as mace or hunting knives.

Protests have taken place every Sunday since the owners of the Tower Theatre announced they would be selling the property to the church. Objections included concerns nearby businesses would have their alcohol and cannabis licenses affected. 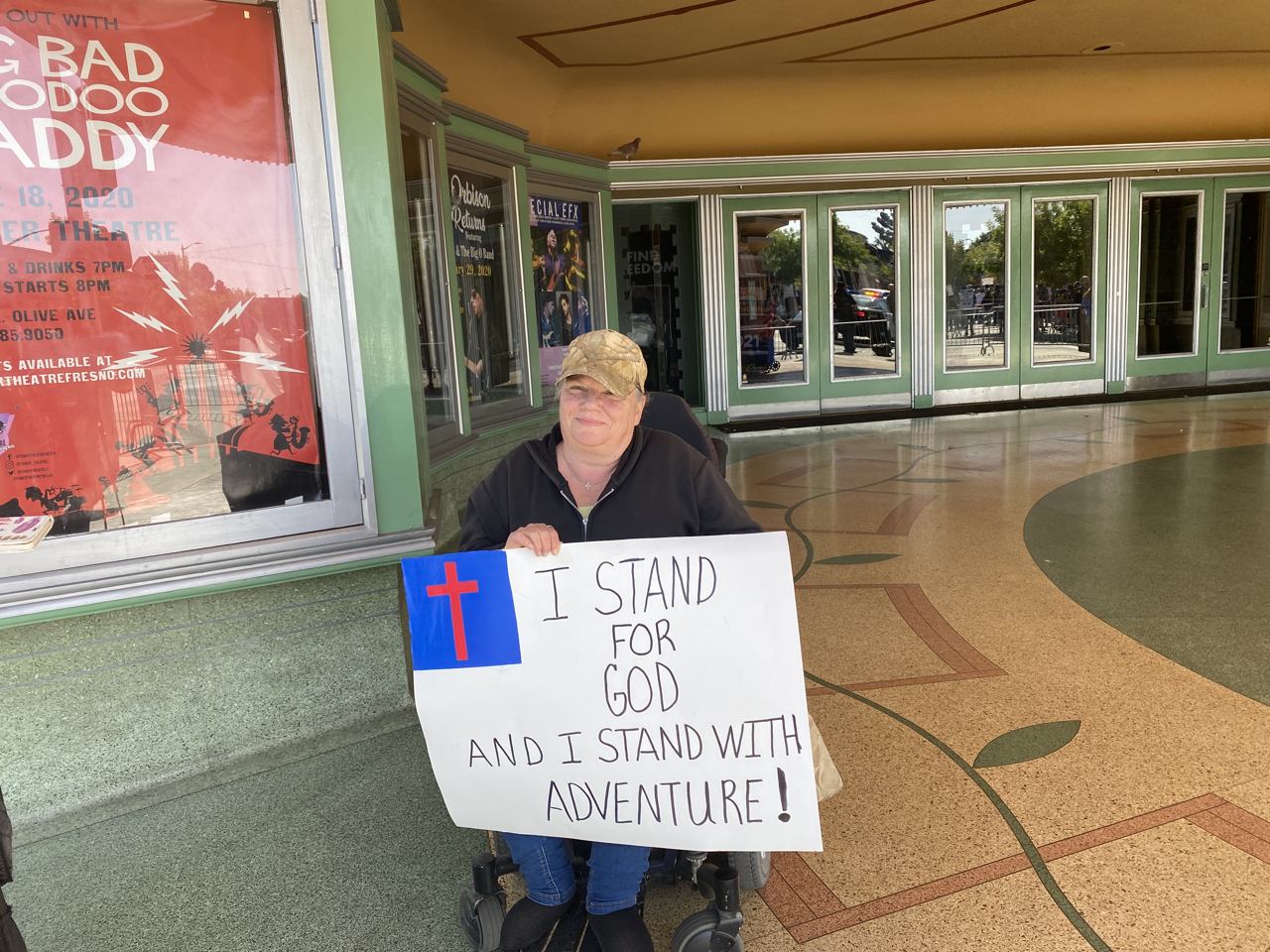 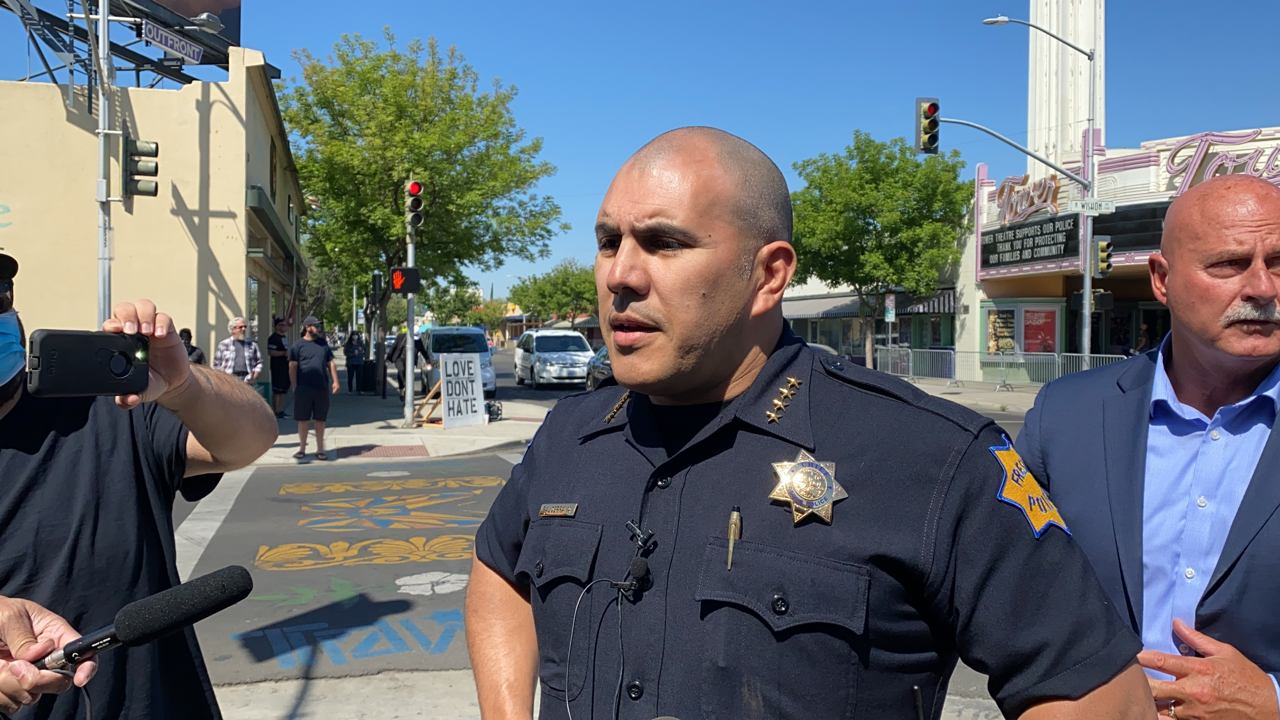 “We wanted to overprepare to make sure if there were any issues that we could, we could handle them.” — Police Chief Paco Balderrama

“It’s been pretty uneventful,” Balderrama said in a media briefing. “We wanted to overprepare to make sure if there were any issues that we could handle them.”

Up to 30 police personnel patrolled the area, with barricades going up at 6 a.m.

“I want to first compliment the police department in the manner which they are handling today’s incident. Chief Balderrama… the fact that these bicycle barricades were put out here to separate folks who have different views, different opinions. And I think that’s what the differences between last week and this week,” Dyer said.

Last week, Dyer, Balderrama and two city councilmembers vowed to ensure peace at the Tower protests. They all said they were not there to take sides on the issue of the theater sale.

Balderrama was unsure if that message had a chilling effect on the Proud Boys or other protesters.

“We felt that we had to be proactive and explain what our role is. I haven’t changed my stance at all. You know, I believe in the Constitution. I believe in people’s right to assemble. I believe in their right to protest. And that’s that’s the oath that I swore to protect,” Balderrama said.

Councilman Miguel Arias rode by the protest on a bicycle, along with his children at one point. 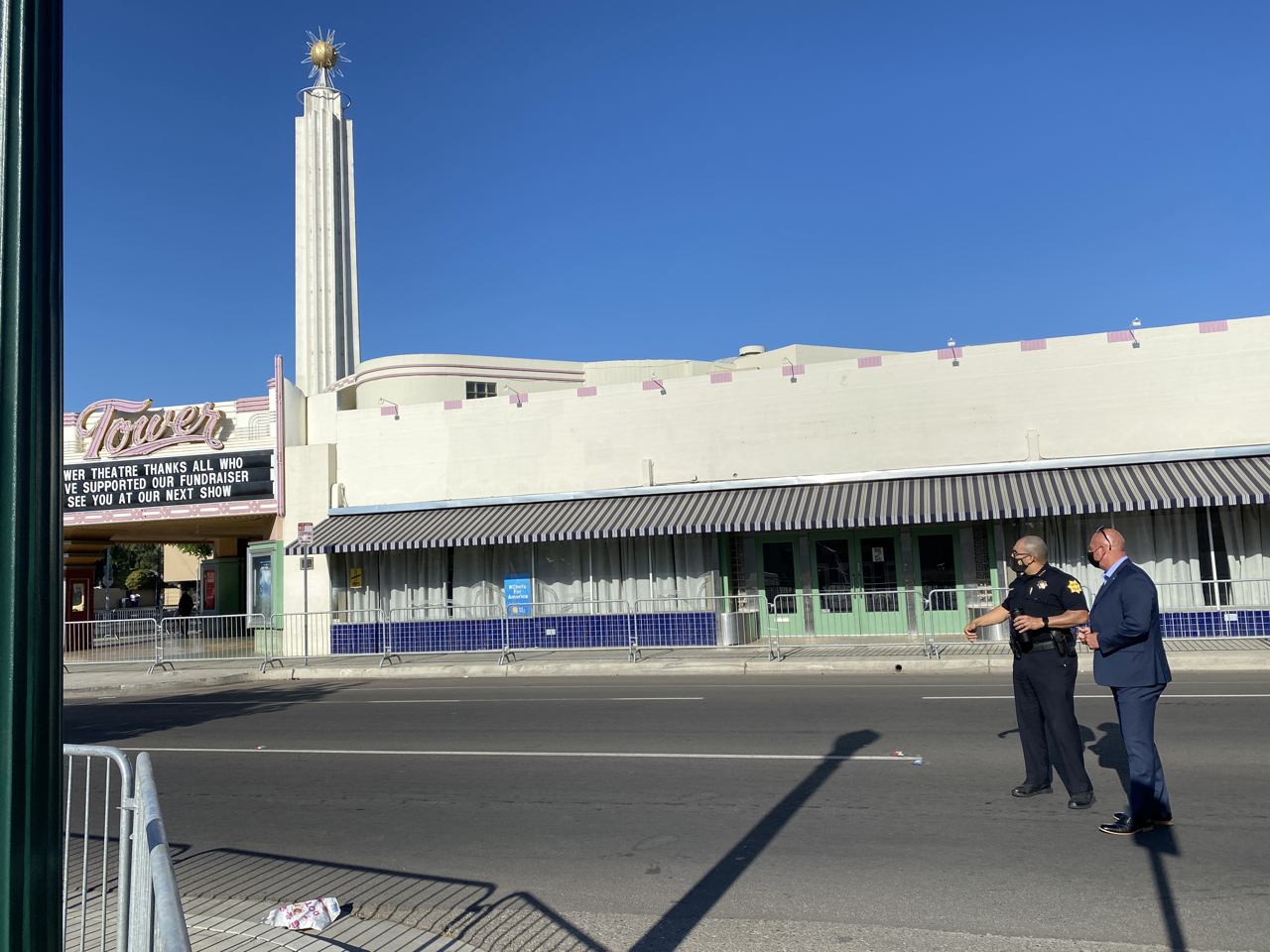 Balderrama said he hopes to reduce police presence next week.

“If we can organize this thing with fewer officers and we’re going to send fewer officers because frankly, there’s there’s a lot of violent crime going citywide. And I would rather focus on that,” Balderrama said.

“I would love to see unity. I’d love to see One Fresno out here. But the reality is that the issues are so polarizing that you see this kind of divide. And so hopefully as time passes by, we’ll be able to get back to the norm of not having to have protests out here or the police,” Dyer said.

Police declared the normally public sidewalks to be private property. Thus, only the protest organizers could determine who stays and who would have to leave.

Media was told to stage on the southwest corner of Olive and Wishon.

“For public safety, (the sidewalks) can’t be used,” Balderrama said.

“Any time you have a protest, there are things that are called time and place where you can designate certain areas for different people, if it will further the peace, if it will prevent violence, it will prevent confrontations. And so this particular matter, according to the attorneys, wherever the barricades were set up, anything behind that area was considered to be private property. And so that was the reason for that,” Dyer said.