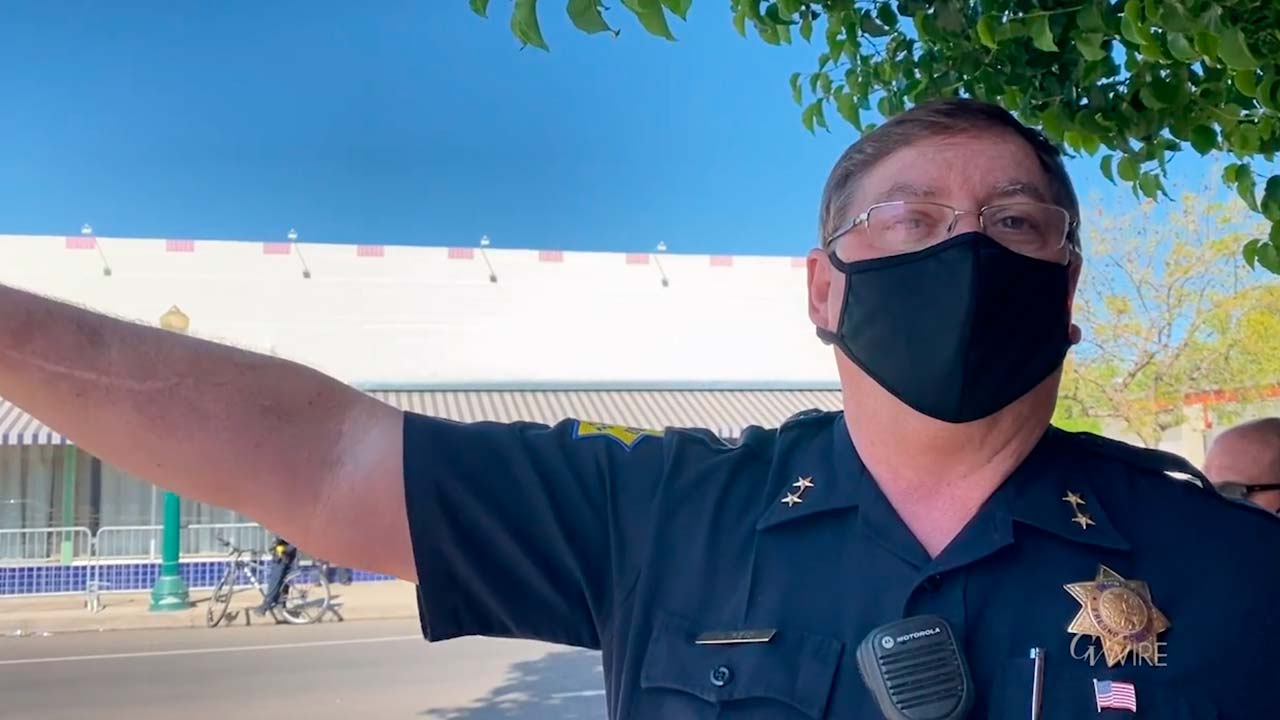 The city of Fresno and Fresno Police Department were determined to give protesters opposing and supporting the sale of the Tower Theatre to a conservative Christian church the ability to exercise their First Amendment right to freedom of speech while keeping them safe from verbal or physical altercations.

But while upholding that First Amendment right, Fresno police on Sunday may have violated another one — freedom of the press — when Deputy Police Chief Mike Reid told GV Wire reporter David Taub to leave a public sidewalk near the northeast corner of Wishon and Olive avenues because Save the Theater protest organizers did not want him there.

Protest leader Jaguar Bennett told Taub he was not welcome because organizers did not like his news stories.

Taub was reporting from a sidewalk adjacent to the parking lot used by the Save the Tower Theatre Demonstration Committee with permission from the lot’s leaseholders.

The sidewalk, inside of a police barricade, was no longer a public space and was for the “exclusive use” of the Save the Theatre demonstrators, Reid told Taub.

“So once we put barricades up, it’s actually a law enforcement border line that we’re enforcing, so these folks have the right exclusively,” he said.

But barring a reporter from an area such as a sidewalk that remained open to the public Sunday appears to be a clear violation of the First Amendment, legal experts told GV Wire on Monday.

Officials with the First Amendment Coalition, a San Rafael-based nonprofit that focuses on press freedom issues, and the Reporters Committee for Freedom of the Press, a Washington, D.C. nonprofit, said that protesters might not like a reporter’s coverage, but they shouldn’t be able to use police to restrict access.

In the absence of an immediate risk of violence or to safety, “there is no freestanding license to prevent reporters from talking to protesters,” said Grayson Clary, a legal fellow with the Reporters Committee. “Just because they didn’t like the cut of his jib, they (organizers) were able to persuade government to enforce their views in response to what the journalist has done in the past.”

Taub has regularly covered the Tower District protests, which began after word emerged that Adventure Church was planning to purchase the iconic Tower Theatre. The Tower District is one of the city’s most progressive areas and is a haven for the LGBTQ+ community.

Even though the status of the sale is in question as a result of lawsuits, the weekly protests have continued to grow in size as well as volume as the Save the Theatre supporters were confronted by church supporters and conservative activists, including members of the Proud Boys.

On April 11, it seemed clear that the counter protesters were attempting to intimidate the weekly protest group. The counter-protesters wore combat gear and carried hunting knives, tear gas and mace while shouting loudly and jostling Save the Theatre supporters.

One Save the Theatre protester, a pregnant woman, was taken to a hospital after she said she was pushed by a member of the Proud Boys during the event, which saw two men arrested.

With the potential for violence apparently ramping up, city and police officials announced last week that the two protest groups would be kept separate, and that police would maintain a buffer zone between them.

On Sunday, sidewalks around the Tower Theatre on the northwest corner of Wishon and Olive and sidewalks and the parking lot on the northeast corner were fenced off with police barricades that reached nearly to the curb. Police also were redirecting southbound Wishon traffic north of the Olive intersection to keep the roadway clear.

David Snyder, executive director of the First Amendment Coalition, said police who are attempting to guarantee public safety may establish separate protest zones and a no man’s land police buffer zone in attempt to ensure public safety. The protest zones must be equivalently sized, giving protesters equal opportunities to exercise their freedom of speech, he said.

But unless there is a risk to safety, police may not restrict movements of the news media in public places under the Constitution, Snyder said.

Under the law, news media representatives are considered “noncombatants” who should have unrestricted access to reporting a story, he said. Objecting to Taub’s presence because of his past coverage was not a valid reason to exclude him, Snyder said.

Establishing a separate “media zone” on the south side of Olive and directing Taub there also was a violation of the constitutionally protected freedom of the press. Such zones are typically set up to put reporters closer to the subjects they are covering, not further away, Clary said.

Sunday’s media zone, which distanced reporters hundreds of feet from the protests, “does not sound like a constitutionally-adequate alternative,” he said.

Lt. Rob Beckwith, a spokesman for the Fresno Police Department, declined to comment on the legal experts’ findings that Fresno police violated the Constitution on Sunday.

“You are asking for a response to a legal opinion,” he said. “We do not comment on legal opinions; however, we believe we acted appropriately in balancing the safety of all individuals present while ensuring they were free to exercise their rights.”

Beckwith said he also could not discuss the legal advice that Fresno police say they received Sunday from the City Attorney’s Office concerning restricting access to public sidewalks for the news media because of attorney-client privilege.

Sontaya Rose, spokeswoman for the city of Fresno, did not respond to a GV Wire query asking the City Attorney’s Office to specify the case law that supported the advice provided Sunday to Fresno police.