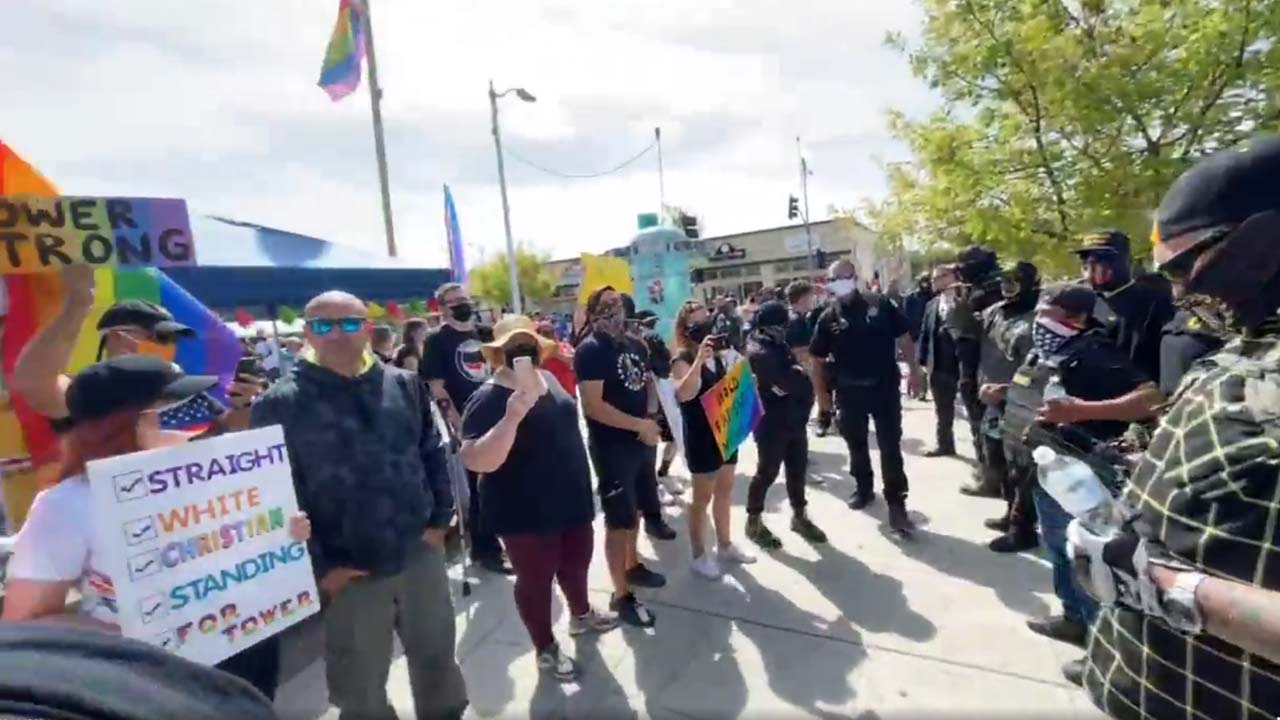 Opposing sides of the increasingly tense protests at Tower Theatre will be separated by barriers, city of Fresno and police officials said.

Police Chief Paco Balderrama said the sides will be kept separate at the every-Sunday protest over the potential sale of the iconic Tower District venue.

“We are there to keep the peace and to protect the rights of those who are protesting or attending,” Balderrama said.

A group, led by the Save the Tower Theatre Demonstration Committee, have protested the planned sale of the theater to Adventure Church. They have demostrated at the corner of Wishon and Olive every Sunday since January.

In recent weeks, members of the Proud Boys — identified by government officials as an extreme right-wing group — have appeared at the protest as well. There have been several verbal skirmishes and a few physical confrontations.

“We want to send a very strong message that intimidation tactics will not be tolerated and that starting this Sunday, there will be a much different approach to to policing this event,” Mayor Jerry Dyer said.

The sale of the Tower Theatre is currently being challenged through a lawsuit. In recent court documents, the theater’s attorneys said escrow has expired but they have not revealed if the sale will proceed.

Balderrama would not confirm the exact nature of Sunday’s safety plan. Both he and Dyer said officers will be more diligent.

Last Sunday, groups were separated on opposite sides of the sidewalk. That was not enough, Balderrama said.

“(The community’s) concerns are for safety. Their concerns are for the level of police service that they should be getting. And my message is we have heard you loud and clear,” Balderrama said.

The community complained to both Dyer and Balderrama that they felt officers took sides in keeping the peace. That came from both Tower supporters and the Proud Boys.

“The officers are trying very hard not to take sides, not to appear to be taking sides. And that’s difficult to do. So obviously, in a gathering such as this,  people still have to obey lawful orders,” Balderrama said.

Bike officers will escort protest groups back to their cars, Balderrama said.

The immediate plan for separating the protesters is for just this Sunday. Balderrama said it “depends” if it will happen in the future.

Balderrama estimated that police have worked 740 personnel hours, including 428 hours of overtime at a cost of $40,000 since January to police the Tower Theatre protests.

“That’s really a very small part of my overtime budget and quite frankly, it’s well worth it,” Balderrama said.

Last Sunday, the department called in more officers as the protest evolved. Balderrama said the Central policing district had to shut down to control the crowd.

Tower Representatives: We’ll Be There

The two councilmembers who represent portions of the Tower District, Esmeralda Soria and Miguel Arias, say they will be in attendance at the protest this Sunday.

“It is important that we do send a strong message, not just to the outsiders, those Proud Boys that are coming in, terrorizing our community and terrorizing families, but that the community also hears loud and clear that we’re going to do everything to ensure that our city is safe,” Soria said.

Arias said elected city leaders have avoided publicly joining the protest in the interest of fairness. The issue of zoning the Tower Theatre for use as a church could eventually be decided by council.

“The events of last Sunday cross the line,” Arias said. “(We will not be) there to be in support of the recent (rezone) conversation. (We will be) there to ensure and be in support of our Tower residents who have a right to peacefully protest in their own city without fear of a threat or intimidation.”

Dyer will be there as well. 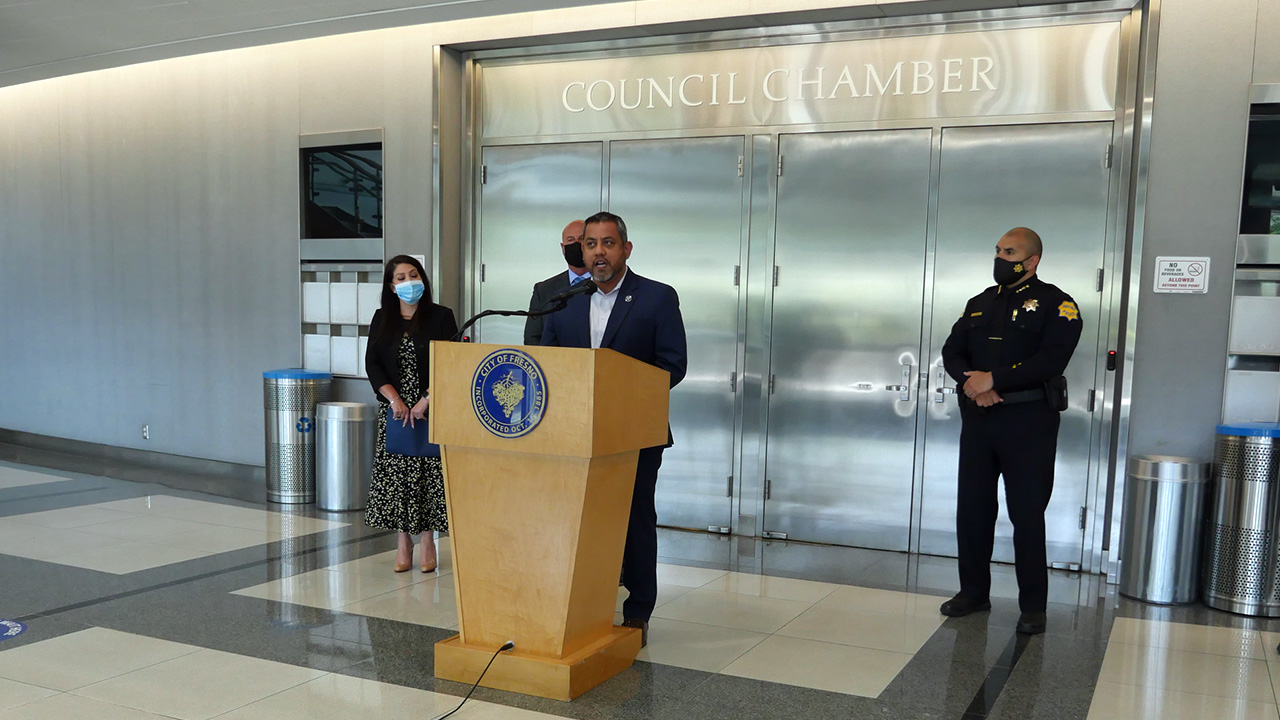 Arrest Made at Tower Protest

A leading protest group said the presence of the Proud Boys “threatens the free speech rights of law-abiding citizens.”

“There is a huge disconnect between Chief Balderrama describing the Proud Boys as a hate group and the police on the streets treating the Proud Boys with friendliness and deference,” said Heather Parish, with the Save the Tower Theatre Demonstration Committee. 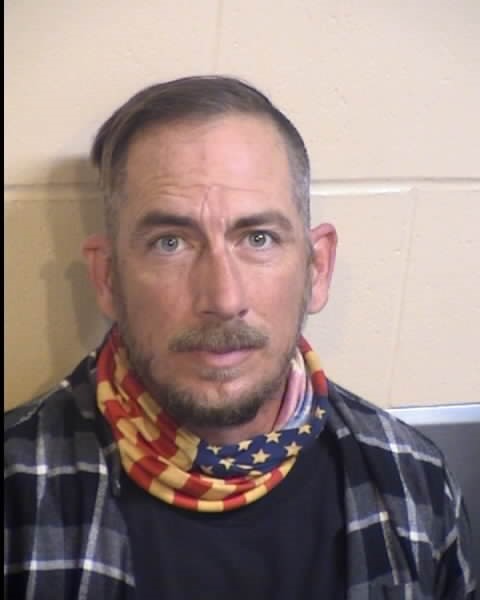 Tower protesters claim members of the Proud Boys have physically assaulted them.

Dyer said that a pregnant woman was assaulted last Sunday and taken to the hospital as a precaution.

Police did arrest two men at the most recent Sunday protest.

One man was arrested for a traffic violation.

Marcus Kelly, 43, of Santa Fe Springs, was arrested and charged with being an ex-felon in possession of pepper spray.

“During the event, one subject shoved another. Officers observed this occur and were able to intervene preventing it from escalating,” Lt. Rob Beckwith said earlier this week. “He denied any affiliation with any of the groups present.”

Balderrama did say Kelly was wearing clothing consistent with the Proud Boys.

“In my mind, they are part of that organization,” Balderrama said.

Beckwith clarified that Kelly is not a suspect in the assault of the pregnant woman and no arrests have been made in that incident.

Last week, Fresno police fired Officer Rick Fitzgerald for his previous ties to the Proud Boys. Fitzgerald was spotted — while off-duty — at the March 14 protest at the theater, observing from across the street.

Fitzgerald said his dismissal deprived him of due process and he is considering appealing the decision or taking other legal action. In an interview with GV Wire, Fitzgerald said he was fired before he was interviewed by the police department’s internal affairs bureau.

“I’m not going to get into the personnel investigation in and of itself, regardless of what the officer has said publicly, other than to reiterate what I said early on — that there were egregious policy violations, which is what caused him to be summarily terminated. And I support that decision by the police chief and believe it was the right decision,” Dyer said.

Video surfaced of Fitzgerald, wearing Proud Boys gear, at a November rally in Sacramento. He is seen in the middle of skirmish and at one point engaged in a tug-of-war with someone carrying a flag.

Fitzerald’s firing is perhaps the highest-profile separation of a member of the Fresno Police Department since Deputy Chief Keith Foster. Dyer said the cases are not similar.

“Two totally different cases, two cases that I’m not going to get into today,” Dyer said.

Foster was convicted in 2016 for drug trafficking while serving in the deputy chief position under then-police chief Dyer. A week after Foster’s 2015 arrest, he resigned and was not officially fired.