MODESTO — A Northern California man was convicted Monday of first-degree murder for shooting a Stanislaus County sheriff’s deputy in what investigators termed an execution-style shooting in 2016.

After fleeing, Machado carjacked a couple in a nearby town and then attempted another carjacking before he was captured in an alley in the Tulare County town of Lindsay, authorities said.

A jury deliberated for less than a day before convicting David Machado, 42, of Keyes. Prosecutors said Machado planned the shooting, but his attorney argued it wasn’t premeditated and Machado should be found guilty of the lesser charge of second-degree murder, The Modesto Bee reported.

Wallace, a 20-year veteran of the force, had pulled over a van that Machado was driving because it had been reported stolen nearly a week earlier by Machado’s mother. Machado shot Wallace in the face and neck as the deputy was calling for backup, authorities said.

After fleeing, Machado carjacked a couple in a nearby town and then attempted another carjacking before he was captured in an alley in the Tulare County town of Lindsay, authorities said. 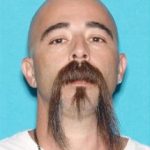 Machado Out on Bail at Time of Killing

Authorities said that two weeks before the killing, a warrant was issued for the arrest of Machado, who had been released on bail for a previous felony offense but failed to show up in court for the start of jury selection in the case. Machado told several people that he wouldn’t return to jail and planned to “shoot it out” with police, The Bee reported.

Machado was convicted of murder with special circumstances, including killing a law enforcement officer on duty. He also was found guilty of carjacking, attempted carjacking, and being a felon in possession of a gun.

Machado’s trial was delayed for two years after he was declared mentally incompetent and was treated at a state mental hospital before the trial resumed.

Jurors on Thursday were scheduled to begin a second sanity phase of the trial. If the panel determines that Machado was sane when he shot the deputy, he could face life in prison without chance of parole. If found insane, he could be committed to a state mental hospital.