Advocates for a county-wide transportation sales tax are once again pushing for its renewal.

The half-cent tax was first approved by voters in 1986, followed by a renewal in 2006. It is now set to expire in June of 2027, and boosters want to get a head start on a effort to extend it. Measure C could once again appear on the ballot in November 2022.

The third round of Measure C would need two-thirds voter approval. Exact details are still be worked on, says Mike Leonardo, executive director of the Fresno County Transportation Authority. He prefers the tax rate to remain the same.

“We kind of like a half-cent because we can say it’s not a tax increase; it is just a continuation of what we’ve got in place,” Leonardo said. FCTA and the Fresno Council of Governments are polling the public on how much the tax should be, how long the Measure C extension should last, and projects to spend the money on.

As the process is in the early stages, several social justice groups say they want to make sure the community has a say.

Measure C received $76 million from sales tax for Fiscal Year 2019-2020 and and collected $853 million (with interest included) of the expected $1.7 billion thus far over the lifetime of the tax.

Through the first seven months in FY 2021, Measure C raised $52 million. The projection for the full year is $89 million.

The deadline to place a Measure C renewal on the ballot is August 2022 and requires a vote by the Fresno County Board of Supervisors. 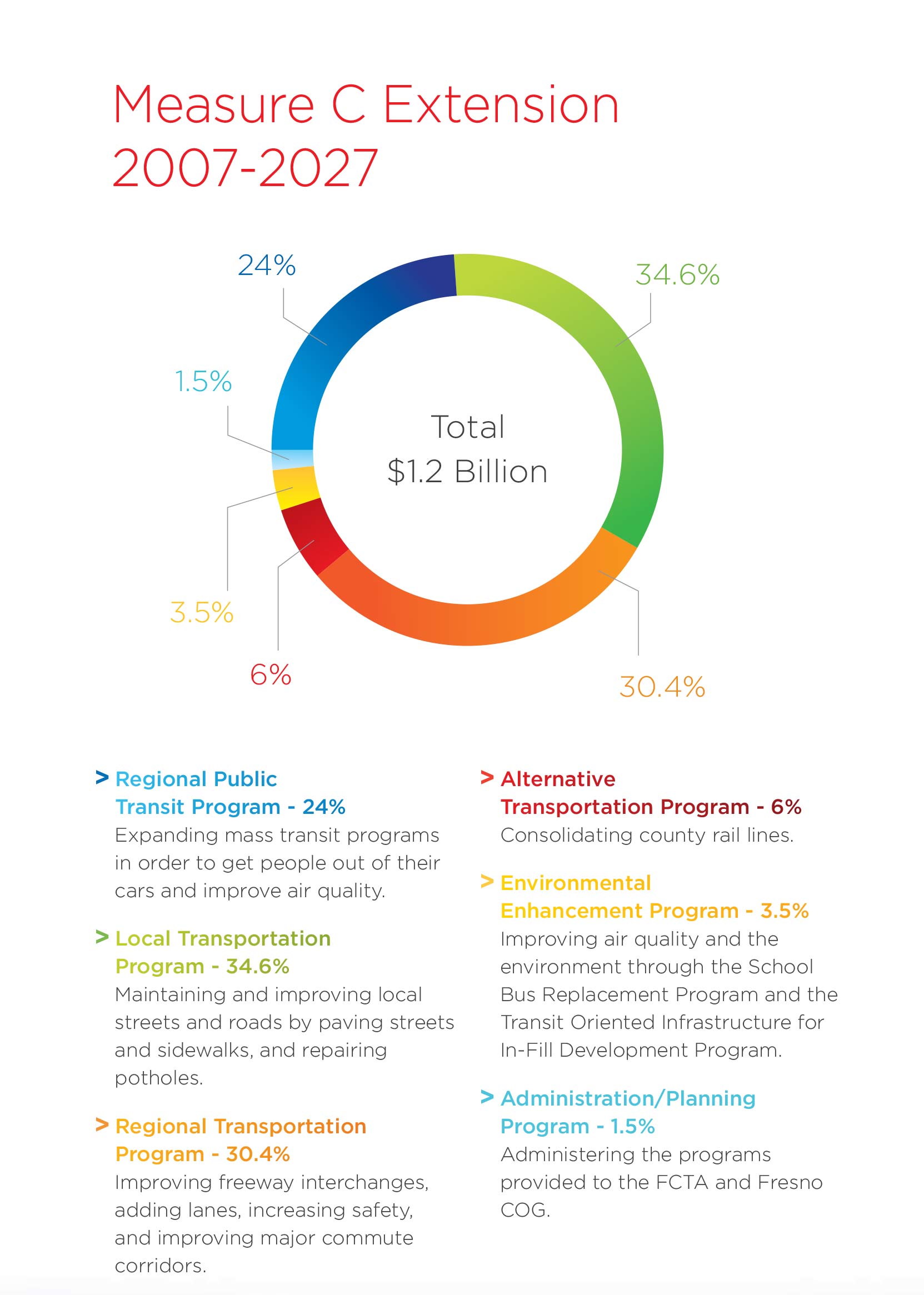 A pair of internal committees — an executive committee, and a technical work group — have met to discuss the future of Measure C. Both groups have held monthly meetings that are open to the public.

Several social justice groups recently sent a letter to the FCTA and Fresno COG boards calling for increased public participation to develop the next Measure C.

“The Measure C renewal process has made no attempts to seek input from community members and seems divorced from principles guided by transparency and community engagement,” the March 24 letter said.

“We have a very extensive public outreach plan in place. Again, we’re just in step one. The community member who sort of took issue with it, she never really let us get our presentation off the ground. She just sort of jumped in and said it was flawed from the beginning,” Boren said.

Boren identified that member as Leslie Martinez, the community engagement specialist for the Leadership Counsel for Justice and Accountability. She is on the Measure C technical work group, representing community based organizations along with Keith Bergthold of Fresno Metro Ministries.

Leonardo said there is a plan to hold several community meetings, but none have been scheduled.

Composition of the Committees

The letter sent by several social justice groups say these groups “were selected behind closed doors; there is a complete lack of community representation in the executive committee.”

“That’s just not the case. That’s just factually not correct. And our hope is that we can correct some of that misinformation, because once it is out there in the public, you know how it is. It’s out there. People don’t read the correction if the correction is even there,” Boren said.

The technical work group is made up of 40-plus members. They consist of the existing Regional Transportation Plan and Sustainable Communities Roundtable plus recommendations from “local agencies, groups and constituencies” according to a FCTA document.

“You can’t involve a million people on this effort, right?” Leonardo said, referring to Fresno County’s population. “We’re hopeful that through our outreach efforts and these groups — they all have a constituency — every city is represented. Fresno County is represented. We see that really as kind of a primary entry point for public input.”

The executive committee consists of 23 elected officials and other community leaders. Similar to the technical work group, membership were based on recommendations from various community groups or recruited by FCTA and Fresno COG staff.

Two spots are held for community based organizations, represented by Linda Hayes, chair of the Fresno EOC board; and Artie Padilla with the Central Valley Community Foundation.

Additionally, FCTA and Fresno COG have their own boards, comprised mainly of elected officials from Fresno County cities.

Over the years, Measure C has provided funds for road projects such as the Highway 180 extension and the current construction of Veterans Boulevard in northwest Fresno.

The largest portion goes to local transportation programs, at 34.6% of the budget. This includes things like street maintenance and other spending distributed to the various cities in the county. The city of Fresno receives the most from this area, with 45%.

Fresno Councilwoman Esmeralda Soria, who serves on the FCTA board of directors, is pushing for the city to receive more.

“It’s time that we demand that we get our fair share of dollars to invest in public. Because it brings a whole list of benefits to our community,” Soria said at the Feb. 18 city council meeting.

The city of Fresno comprises of 54% of the county’s population, based on California Department of Finance figures through Jan. 1, 2020.

Other areas of allocation include freeway building and maintenance (30%); regional mass transit projects (24%) including $11 million for the city of Fresno’s FAX bus system; with the remainder going to alternate transportation programs, environmental programs and administrative costs.

Boren said he would like the future of Measure C to continue its current spending plan, focusing on transit projects and street repair.

“The new measure will be pretty similar to what we have right now. What is likely to change is the percentages,” Boren said. “The voters are probably going to want to see a higher percentage going to their local roads, maintenance and potholes.”

Leonardo doesn’t see new highways being built with the next version of Measure C, but rather maintenance of current roads. The Shaw Avenue/Highway 99 interchange in northwest Fresno — notorious for its traffic backups — is one area Leonardo wants to focus on.

“(It) is an awful, awful interchange. It’s it’s very difficult to get through,” Leonardo said.

Another aspect called for by environmentalist is alternate transportation methods. Leonardo said technology has improved air quality, including more people being able to work from home.

“I think there’s a combination of things that are already in this measure that I expect to be in the next measure as well. That will go to address those concerns right now,” Leonardo said.

Both men say it is easier to maintain a road before trouble happens, rather than repair it later.

“It’s the bread and butter and what we what we need moving forward. And I think the polling will reflect that as well,” Boren said.

The transportation agencies hired FM3, through a public process, to conduct polling.

“It’s asking questions. What do you know about the measure? That is sort of the fundamental point, what do you know about it? And then it asks them what they see as the biggest transportation needs in the county. What are the kinds of things they would support?” Leonardo said.

Could Developer Fees Go Away?

Measure C allows for FCTA to charge developers a fee for building new homes and commercial buildings to help offset the costs of transportation.

“There was consensus among the leadership of the cities that development needed to pay its fair share. And so that’s kind of where this came from,” Boren said. “Moving forward, I’m not certain. I’ll have to be determined.”