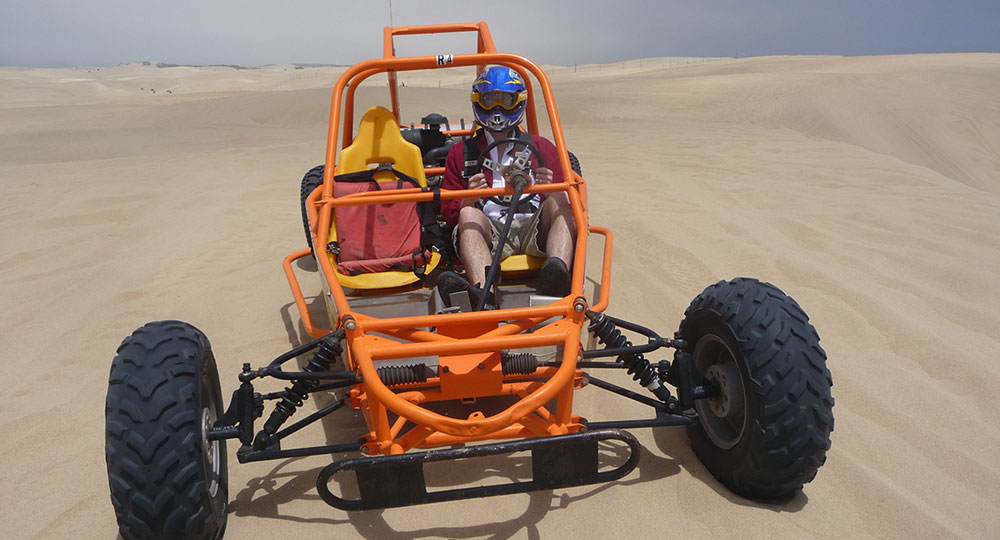 The California Coastal Commission on Thursday ordered an end to off-road vehicles at Oceano Dunes state park within three years in a decision that climaxes 40 years of acrimony and debate.

The commissioners voted unanimously to approve a new coastal permit for Oceano Dunes State Vehicular Recreation Area with the condition that off-roading would be phased out at the park.

Oceano Dunes is one of only nine state parks in California — and the only one on a beach — that allows motorized recreation. About 1.5 million people visit the park each  year, with thousands of all-terrain vehicles a day motoring across 3,600 acres of sand.

The decision followed a 12-hour meeting, including five hours of fiery, virtual public comments from nearly 200 people and several hours of discussion among the ten commissioners.

“We are obligated to comply with the Coastal Act,” said Commissioner Caryl Hart. She said it is clear that off-road driving harms resources at the park, which is largely protected under state law as an environmentally sensitive habitat area.

Arguably the most contested stretch of sand in California, the park in San Luis Obispo County has been the stage for decades of governmental infighting, missed deadlines and serial lawsuits.

An array of issues are at stake at Oceano, including  protection of endangered species, recreational access to parks, air pollution from sand and dust stirred up by vehicles, and impacts on nearby communities’ health and safety.

Pro-riding groups have long argued that the coastal commission has applied a heavy hand to park management and vowed to fight the agency in court.

Don Amador, a longtime advocate for off-highway recreation, warned the commission that it was in legal jeopardy, vowing to take the agency to court. “Never have I seen such hubris displayed by a state or federal agency in my career.”

Amy Granat, managing director of the California Off-Road Vehicle Association, said the commission is “making judgments about the value of off-highway recreation. ”

But commission staffers told commissioners that their recommendations “follow the facts and the law.”

“In our view, it would be irresponsible for the commission not to take action here,” said Dan Carl, the commission’s district director.

The commission’s staff says that off-roading at the park endangers rare birds, which nest there. The state parks agency, on the other hand, is adamant that the public should retain a right to use the park for motorized recreation, the activity it was originally established to encourage.

At the crux of the debate is two state agencies with disparate views of state laws, environmental protection and beach access.

The park is home to Western snowy plovers and California least terns, two federally protected birds that build their nests in the sand, making them extraordinarily vulnerable. Every year at Oceano, some of the rare birds are inadvertently squashed under the wheels of off-road vehicles.

After decades of no resolution, the commission in June issued a cease and desist order ordering the parks agency to stop harming imperiled birds because it violates the Coastal Act.

Street-legal vehicles  — not off-road vehicles —  will still be allowed along a one-mile strip of the beach in a northern section of the park that does not carry special habitat protections. The commission also voted unanimously to amend the permit conditions to allow people in campgrounds to drive in the park at night. No recreational riding will be allowed at night.

Many people speaking at the hearing chided the parks department for its failure to meet deadlines and warned that the staff’s proposal to phase out motorized recreation in the park over five years would result in more broken promises.

“What does state park need five years for? We need justice now,” said Lucia Casalinuovo, president of the Oceano Beach Community Association, which represents residents of nearby towns.

“Five years is the biggest kick down the road you have given so far, and you promised not to kick the can down the road,” she said. “ Please do not believe that park will comply in five years when they have not complied in 40 years.”

The hearing began with an admonition from Coastal Commission Chairman Steve Padilla calling for civility and decorum, behaviors that have not been hallmarks of previous meetings on Oceano.

Parks Director Armando Quintero set a conciliatory tone, calling for partnership. He said the issues “are some of the most complex in the state park system.”

Coastal Commission Executive Director Jack Ainsworth reflected on his 35 years of wrestling with the Oceano problem and the “stalemate” with the parks department.

“I’ve always tried to reach compromise, but sometimes it’s just not possible. In the end, we cannot compromise our core values. That’s what’s  happening here,” he said. “We simply cannot continue a cycle of running around in circles, kicking the can down the road. That is not the definition of good government.”

But as the evening wore on, Mark Gold, executive director of the Ocean Protection Council, was frustrated by the acrimony between two state agencies. The Newsom administration last year tasked Gold with bringing the two agencies together after decades of conflict.

Gold said it’s “just not true” that the agencies aren’t at war. “The working relationship between parks and the commission is beyond disappointing.”

The parks department has developed a proposed plan, called a Public Works Plan, that is a management guide for the park and will still require Coastal Commission approval.

The commission took issue with aspects of the plan, saying it did not resolve more than a dozen issues the commission asked the park to address. Instead of making immediate changes, the plan called for multi-year studies of vehicular reduction, wildlife management and air quality, and making adjustments in the future should problems arise.

The parks department’s unwavering fidelity to off-roading may be traced to its unique source of funding. Unlike California’s nearly 300 other parks, the nine set aside for vehicles are funded almost entirely by off-road receipts: license fees from the vehicles, entrance fees from the parks and a portion of gas taxes that everyone pays at the pump.

That money is deposited in the state’s Off-Highway Vehicle Trust Fund, which provides off-road areas with much more operational funding than other parks even though they have fewer visitors.

One of the issues raised is environmental justice and how the park operations are harming the residents of Oceano, a mostly Latino community.  But pro-riding groups assert that they, too, represent a culture with traditions that should be respected.

The commission has a representative appointed by the governor to  specifically monitor environmental justice issues, but that commissioner, Effie Turnbull-Sanders, was not present for Thursday’s meeting. In addition, the gubernatorial appointment to the commission, representing  the Central Coast region, is unfilled.

Commissioners heard public comments from nearly 200 people, most of them polarizing. But the sides coalesced on one point: Instead of punting, someone needs to make a decision.

“Taking no action on these concerns is not an option. We must resolve this conflict,” said state Sen. John Laird, a Democrat from Santa Cruz whose district includes the park.  In eight years as former head of the state resources agency, Laird has debated the issue countless times.

Julie Cart joined CalMatters as a projects and environment reporter in 2016 after a long career at the Los Angeles Times.

Who Wants to Be a Marijuana Millionaire? You Might Recognize These Names