A man is dead after a fiery crash at Bullard and West that happened shortly after 3 p.m. Thursday afternoon.

Fresno police say they received a call of a man asleep or passed out inside a utility van at Marks and Browning. When officers arrived, they found the man seated in the drivers seat with his foot on the brake.

After a short conversation with officers, police say the man suddenly put the van into drive and took off eastbound on Bullard.

“We don’t know why (he took off), that will be part of the investigation,” said Fresno Police Lt. Rob Beckwith. 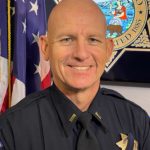 “We don’t know why (he took off), that will be part of the investigation.”–Fresno Police Lt. Rob Beckwith

The officers gave chase for a short distance but stopped the pursuit due to the high rate of speed, according to Beckwith.

The van continued on Bullard until it collided with a car that was turning southbound on West. The van then rolled over and came to rest against a tree at the intersection next to a Dutch Bros. coffee kiosk. The van caught fire and the driver was killed. The Fresno County Sheriff’s Office later identified him as 48 year old Robert Makoni of Oceanside who was in the process of moving to Fresno.

The driver of the vehicle that was struck in the intersection was taken by ambulance to a hospital with complaints of pain. Police say the person’s injuries did not appear to be life threatening.

GV Wire℠ spoke with a woman who was in the Dutch Bros. drive thru when the van exploded into flames. She says the barista taking her order told her to run at the moment the accident happened.

“Just ran. He said run, and I ran. I got out of the car, my son got out of the car,” said Amy Martinez. “We couldn’t move our car. That car (the van) blew up so fast.” Martinez believes the side of her car closest to the van was damaged by the fire.

The intersection is expected to be closed for at least five hours while police finished their investigation.