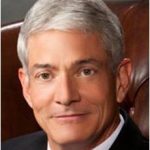 State Center Chancellor Paul Parnell is stepping down as of July 6, and the district is conducting a nationwide search for his replacement. Parnell has been chancellor since 2016.

The Yuba Community College District has colleges in Yuba and Yolo counties and campuses in Colusa, Lake, and Sutter counties.

He earned bachelor’s and master’s degrees in physics from the University of Florida and a doctorate in educational leadership at Pepperdine University.

Houston was the ideal choice to become interim chancellor because of his experience in a community college district with multiple campuses and “successful track record as a respected statewide leader in community colleges,” Board President Annalisa Perea said.