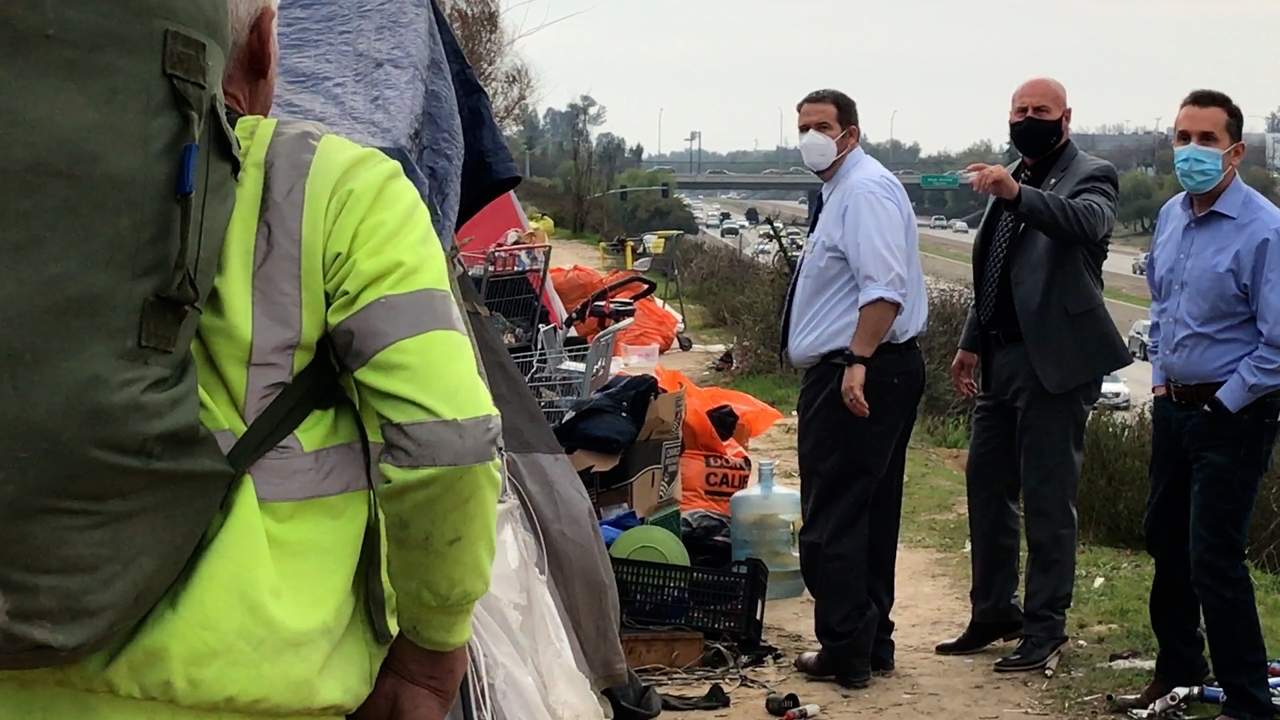 Homeless campers along Highway 41 near Sierra Avenue were offered a warm meal, a place for their animals and possessions, and a roof over their head Thursday, the result of a city-state partnership to get the homeless into a safer place.

A man named “Rocky” was on the receiving end of the help and told GV Wire℠, “Thanks to the mayor and Poverello House for doing this.” He said he was happy finally to be getting a real roof over his head. Rocky said he was an electrician for 20-plus years until a series of unfortunate events left him homeless. 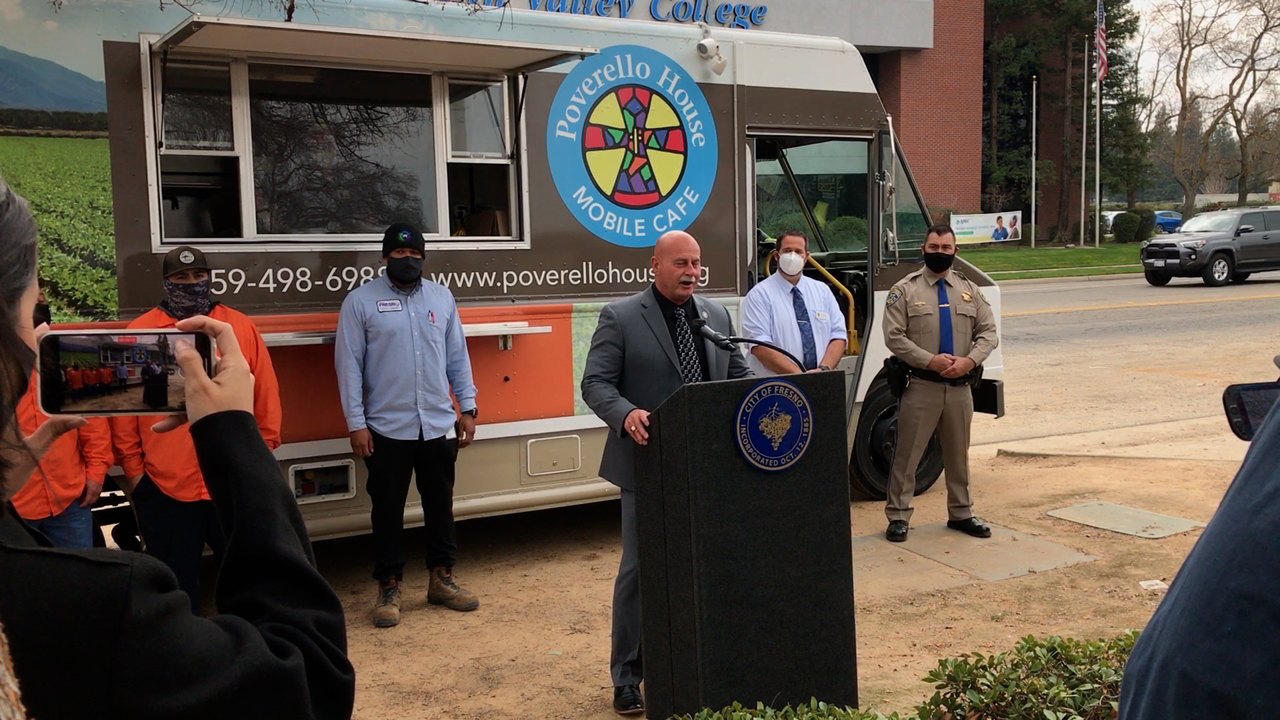 By noon, 14 people had already taken advantage of the offers provided by outreach teams. By the end of the day, the city said all 25 available motel rooms were filled and a total of 35 people were housed.

The Poverello House provided transportation and food. The California Highway Patrol, Caltrans and Fresno Police Departments all worked together to clean up the camps in a safe and respectful manner.

Mayor Jerry Dyer says the cooperation from the state of California was born from a series of meetings that demonstrated Fresno had a plan to not just move people, but move them into a better situation.

Dyer said Jason Elliott, a senior advisor to Gov. Gavin Newsom, was instrumental in making this happen. He says the state receives calls from cities up and down the state every day asking for this kind of help. So far, Fresno is the only city to get it, and Dyer believes it’s because he’s been able to communicate a vision to the administration.

“We just want to make sure that we’re not displacing people from the freeways to the neighborhoods,” he said. “That would be counterproductive. So our plan is to take them from the freeway to housing.”

Dyer says Newsom saw some of the tent encampments along Highway 99 when he was in town Wednesday. “He drove on 99 yesterday. He is well aware.”

The city of Fresno continues to house the homeless through Project Off-Ramp. It’s what the city describes as an off-ramp to homelessness and an on-ramp to a better, more productive life.

A series of recently acquired motels are being utilized to provide a safe option for people, and the city has plans to purchase more using federal and state dollars. 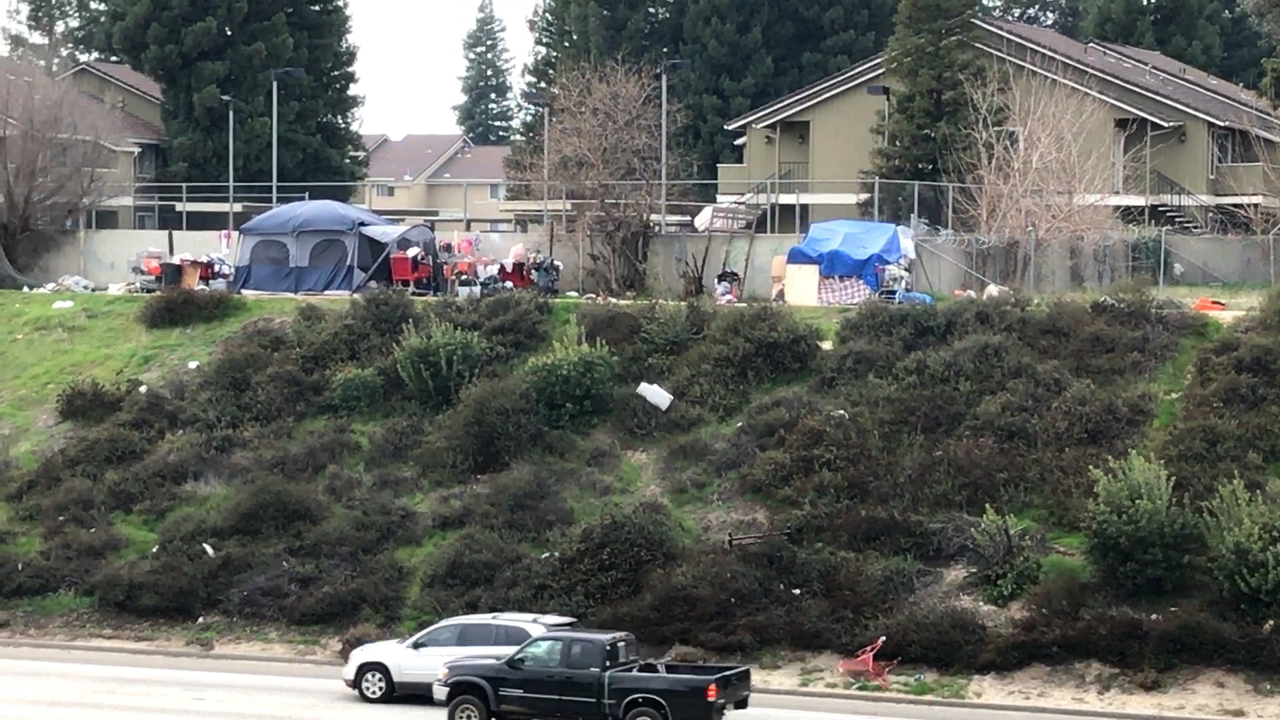 Tents along the side of Highway 41 south of Sierra Avenue. (GV Wire/Jim Jakobs)

Three out of four newly repaired motels along Parkway Drive are fully occupied, with plans to have the fourth occupied following Thursday’s Project Off-Ramp outreach event.

Approximately 275 individuals, including 81 children, now have a safe place to sleep at night, all thanks to the collaborative effort primarily funded by the state Homekey Program, according to a release from Fresno Housing.

“Many of the persons housed are children who now have a safe place to sleep,” deputy executive director Tracewell Hanrahan said in a statement.

Fresno Housing and its partners facilitated the purchase, repair, and occupancy of the motels listed below into immediate housing for families and individuals at high risk.

The hotels that have been renovated are: 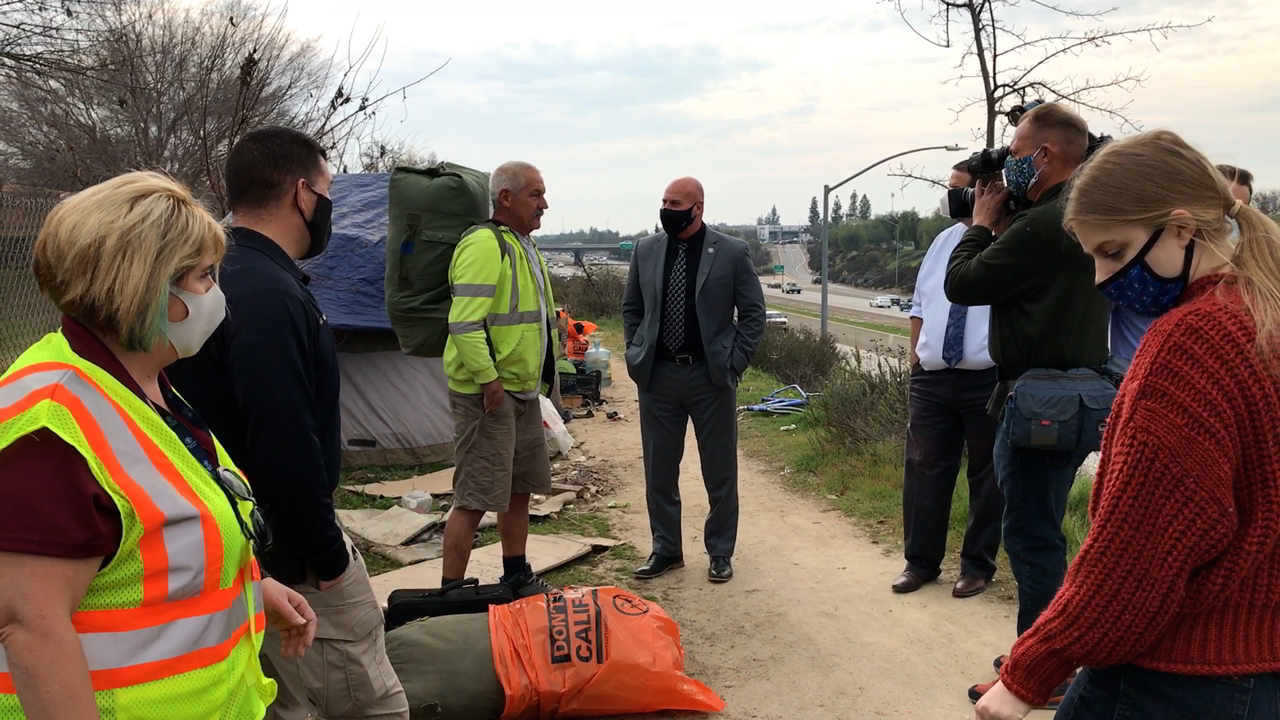 Mayor Dyer speaks with ‘Rocky’ who was grateful to receive help. Rocky says his stuff is stolen all the time, and he’ll be happy to be safe. (GV Wire/Jim Jakobs)

Dyer says he decided to push for this type of operation after three homeless people were struck and killed by cars and 618 fires occurred along the highway last year. He says there are 53 miles of freeway in the city between highways 99, 168 and 41 that need to be tended to.

“Next week, we are going to start our efforts going southbound off Highway 41 and Friant all the way down to highway 180,” said Dyer.

He says the outreach teams will focus next on Highway 99 and Golden State, followed by the entire stretch of Highway 180 that borders the city.

“It’s my hope that over the next 60 days, we will be able to say we’re done with the freeways, then transition into the neighborhoods,” Dyer said. 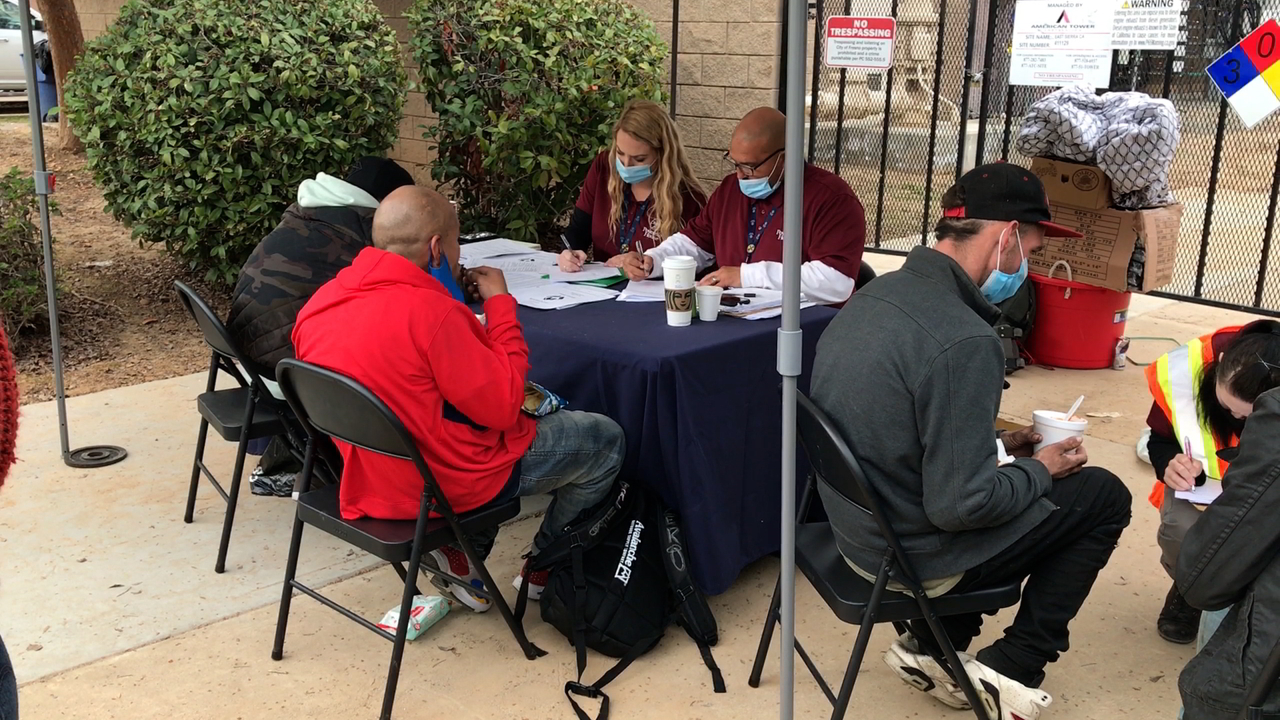 Workers from the Poverello House work with homeless people to get them checked in for a meal, a ride, and suitable housing. (GV Wire/Jim Jakobs)

Dyer says that even after this initial period of relocating people into housing, there will be an ongoing partnership with the California Highway Patrol and the Fresno Police Department to ensure the camps don’t return.

“Once we take ownership of the freeways with the state, it is our intent to not allow homeless to settle,” explained Dyer. 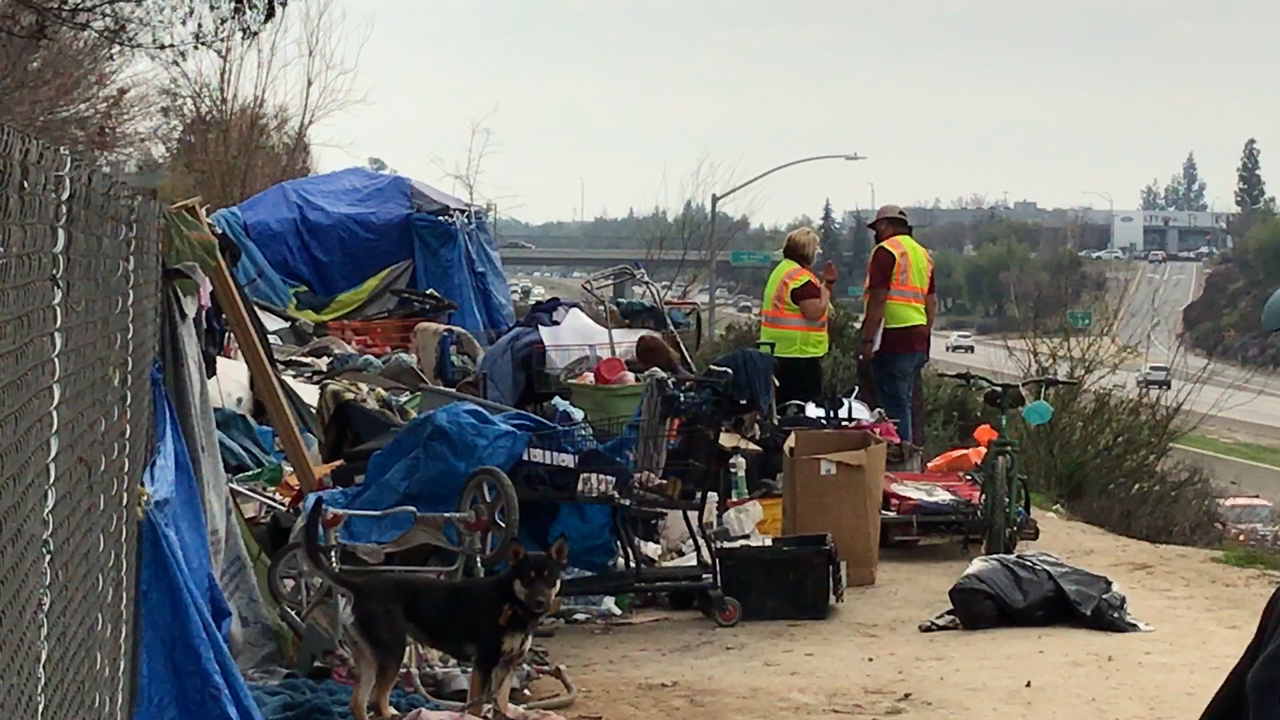 Caltrans workers stand next to a homeless encampment above Highway 41 in Fresno. (GV Wire/Jim Jakobs)