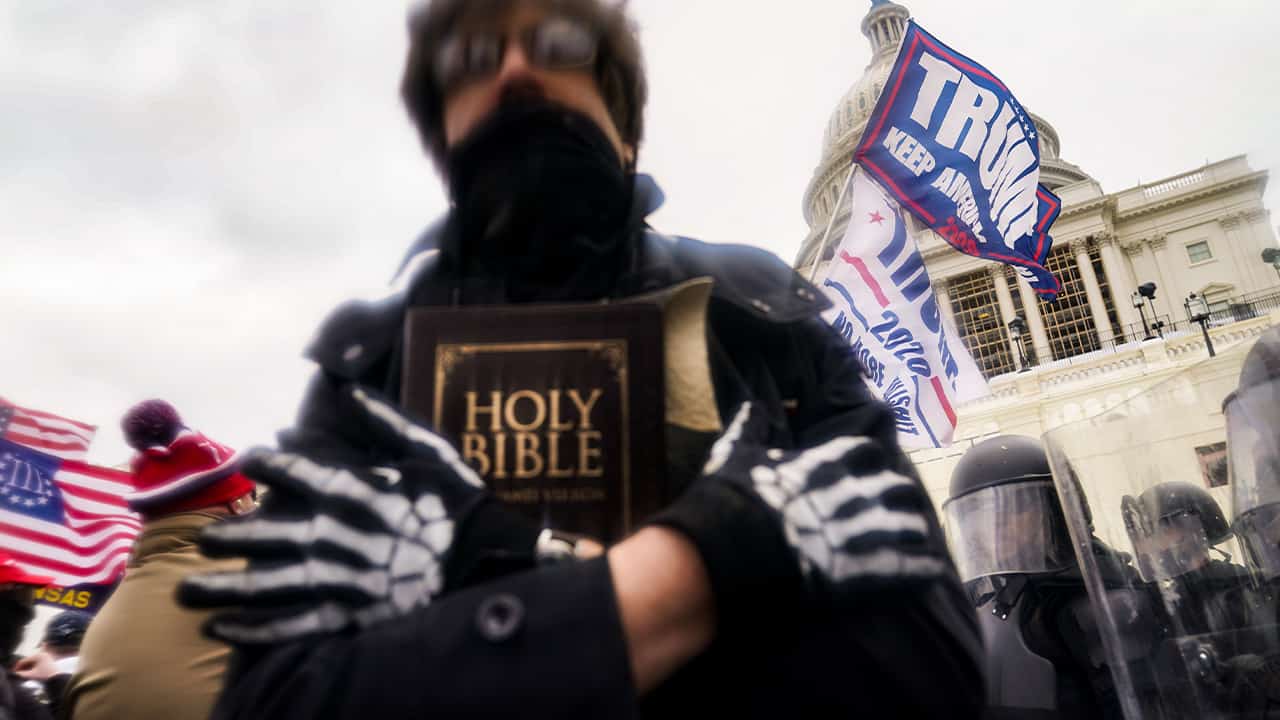 WASHINGTON — The Christian imagery and rhetoric on view during this month’s Capitol insurrection are sparking renewed debate about the societal effects of melding Christian faith with an exclusionary breed of nationalism.

The rioters who breached the Capitol on Jan. 6, leading to federal charges against more than 130 people so far, included several people carrying signs with Christian messages, and video showed one man in a fur hat and horns leading others in a prayer inside the Senate chamber. They also included multiple current or former members of the U.S. military or law enforcement, as well as a West Virginia state lawmaker.

The rise of what’s often called Christian nationalism has long prompted pushback from leaders in multiple denominations, with the Baptist Joint Committee on Religious Liberty forming the Christians Against Christian Nationalism coalition in 2019. But in the immediate wake of the insurrection, other Christian leaders spoke out to denounce what they saw as the misuse of their faith to justify a violent attack on a seat of government.

Russell Moore, president of the public policy arm of the Southern Baptist Convention, said that when he saw a “Jesus Saves” sign displayed near a gallows built by rioters, “I was enraged to a degree that I haven’t been enraged in memory. This is not only dangerous and unpatriotic but also blasphemous, presenting a picture of the gospel of Jesus Christ that isn’t the gospel and is instead its exact reverse.”

Dwight McKissic, a leading Black Southern Baptist pastor who has publicly criticized the denomination’s leaders’ handling of racial justice, urged them in a tweet to also “denounce this flagrant display of White Christian Nationalism” by insurrectionists.

To tamp down what both liberal and conservative clerics view as a misappropriation of their faith, however, they must first tackle the challenge of defining Christian nationalism for a broad audience. Christians Against Christian Nationalism describes it as an ideology that “demands Christianity be privileged by the state and implies that to be a good American, one must be Christian.”

During a virtual panel the coalition held this week, one prominent leader underscored that love of country and God can coexist without making a person a Christian nationalist.

It is “very important to understand we are not condemning being patriotic,” said the Rev. Elizabeth Eaton, who leads the Evangelical Lutheran Church of America. Christians “can still be active participants in the public square” while staying true to their faith, she added.

The Rev. Walter Kim, president of the National Association of Evangelicals, sounded a similar note in an interview, citing the corrosive effects of “a convergence of a nationalist identity and a Christian identity.”

“Certainly I love our country, and as the son of immigrant parents I am deeply grateful for the hope this nation represents,” Kim said. “But as a Christian, my highest allegiance is to Christ.”

Yet some supporters of former President Donald Trump say that denunciations of Christian nationalism are a way of attacking them politically. Former Rep. Allen West, now chairman of the Texas GOP, said on a Tuesday panel with several other religious conservatives sponsored by the group My Faith Votes that the term is used against those who “don’t conform to a progressive, socialist ideological agenda.”

Another wrinkle in efforts to steer Christians away from an overtly nationalist projection of their faith is QAnon, the conspiracy theory whose believers were front and center at the Jan. 6 rally in support of Trump’s baseless claims of widespread election fraud as well as the riot that followed.

In the video shot by a New Yorker reporter during the siege, the fur-hatted Jacob Chansley — known as the “QAnon shaman” for his alignment with the conspiracy theory as well as his self-described spiritual leanings — delivered a prayer thanking God “for allowing the United States of America to be reborn.” While Chansley spoke, other rioters fell silent in apparent participation.

Christian author Jemar Tisby said via email that the elements of Christianity present at the riot signal that “violent nationalists have developed ways to deploy such religious symbols in service of their malevolent ends.”

“Christians who want to divest of Christian Nationalism may find themselves leaving their churches because the ideology is so deeply ingrained that meaningful change is not on the horizon,” said Tisby, CEO of The Witness, a Black Christian organization.

In the meantime, Moore said he has begun speaking with pastors about quelling QAnon’s potential influence within congregations and plans to do more to provide resources to that end.

“One of the barriers to speaking to these conspiracy theories is many pastors and leaders rightly recognize this stuff as crazy, so they assume it doesn’t need to be spoken to,” he said. “But we live in a crazy time.”