Mayor Jerry Dyer approved of the lifting the statewide stay-at-home order, but strongly encouraged Fresnans to continue to wear masks.

His request came after a demonstration Saturday by a small group protesting mask wearing in stores that prompted a police response.

“I’m just asking people, can you just please abide by the mask rule in our city? And if there is a business that requires a mask, would you just wear it?” Dyer pleaded. “We do not need any more confrontations like we’ve had this weekend. They’re unproductive. All they do is create a divide in our community.” 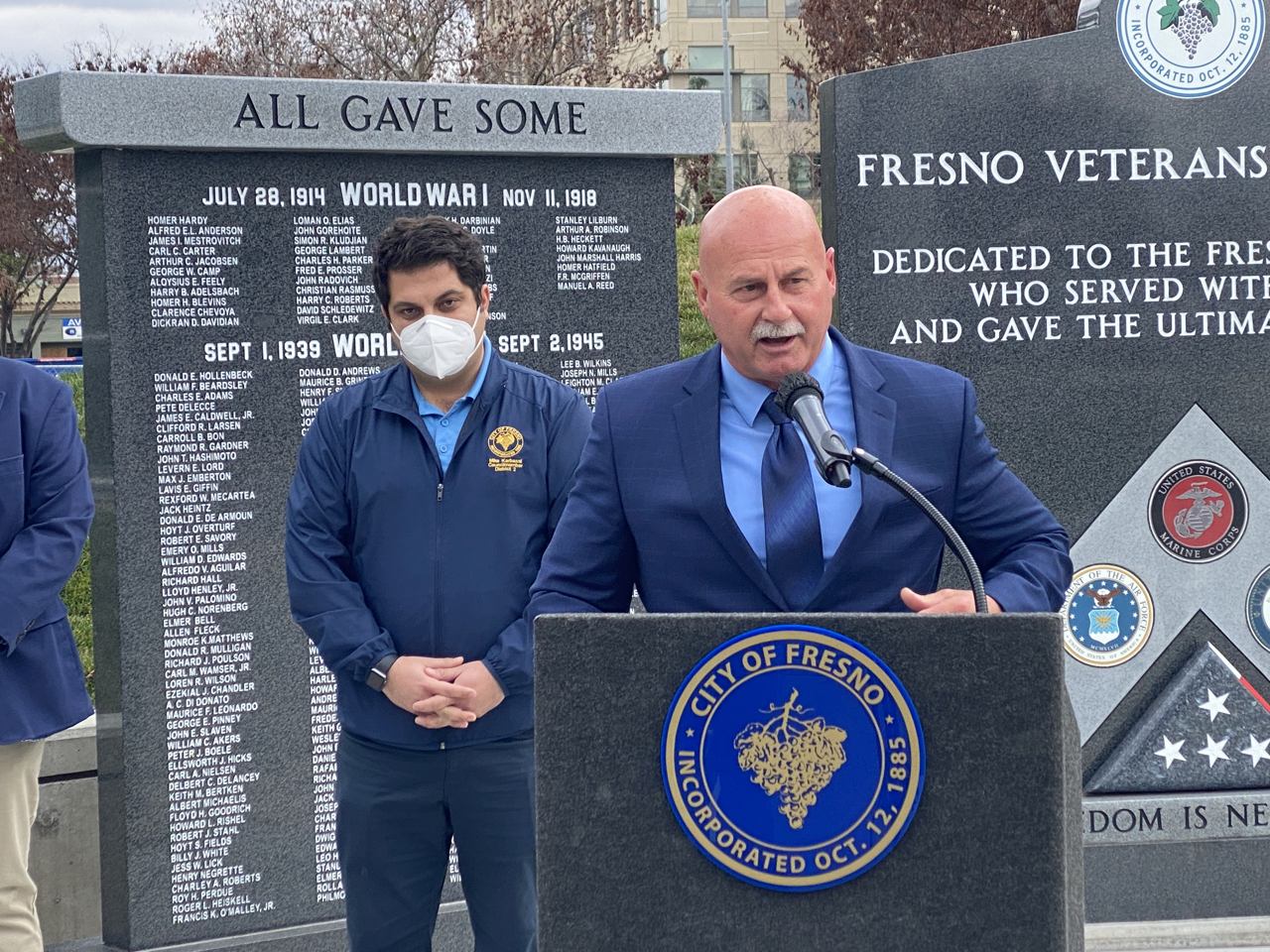 Back to the Purple Tier

Even with the end of the regional stay at home order, Fresno County — like most of the state — remains in the state’s most restrictive ‘purple’ reopening tier.

The lifting of the order now allows for outdoor dining, and for barber and other personal care services to resume indoors.

Ben Martin, a local real estate agent, previously led a similar protest at Trader Joe’s in Fresno. He has admitted being present at the U.S. Capitol during the riot on Jan. 6, but said he was inside against his will.

Dyer acknowledged the group has a Constitutional right to protest, but said its members do not have the right to violate the law. Martin was detained and released by police after entering the store.

Several police officers showed up at both locations to keep the peace. That did not sit well with Dyer.

“Having to respond to a location like this or multiple locations is not right. And so even though they may think they’re exercising their constitutional right, what they’re doing is pulling police officers away from their normal duties in keeping people safe,” Dyer said.

Dyer said that Fresno Police Chief Paco Balderrama will make contact with the group to have a discussion about the nature of their protests.

Balderrama, according to Dyer, also issued a directive to prevent police officers from taking pictures with citizens during politically-charged events. A picture reportedly circulated with the protest group and an officer.

Martin and his followers, as documented through various social media videos, entered the Total Wine and More store on Saturday without masks. The group says mask mandates are unconstitutional.

The video shows Martin and others being asked by the Total Wine manager to wear a mask, and later, not to cause a disturbance. They were eventually allowed to make purchases and move on.

This happened after some in the group were initially refused service by a clerk. The group calculated the cost of their items and left money on the check-out counter.

“That also is not allowed because as you go into a liquor store, there are certain requirements that a store clerk must have or comply with, such as perhaps checking a person’s driver’s license,” Dyer said.

When the same group appeared at Sprouts, the store opted to shut its doors. Some other shoppers who were locked out engaged in a verbal confrontation.

Despite that characterization, a video posted online does not appear to show the anti-mask protesters from blocking the doorway in the traditional sense. The group did set up a table on one side of the entrance.

Returning to the purple tier means restaurants can offer outdoor dining again. Limited indoor dining can is allowed under the lower “red” tier.

Chuck Van Fleet, president of the Fresno chapter of the California Restaurant Association, looks forward to brining back workers.

“By no means does this make it viable for restaurants to survive. We have to get to indoor dining at 50 percent at some point in order for us to survive. This just means that we’re managing loss a little bit better,” Van Fleet said.

He also advocated for mask use.

“We just we need to wear masks and we are excited that we can finally get open. We can start seeing some of our customers again and we can bring back a little bit of hospitality to the hospitality business,” Van Fleet said.

Dyer’s news conference took place in chilly conditions just outside City Hall. The people’s house has been closed for most of the past year since the first stay-at-home order last March.

“I can tell you we have a personal goal here of Memorial Day. I’d like to see it sooner, but much of that’s going to be dependent upon the dissemination of the vaccine,” Dyer said.

[Update, 1/26/2021: the original story said that Martin was cited for trespassing, based on information from the Dyer news conference. Police Chief Paco Balderrama clarified that Martin was not cited, just detained.]