Coaches Want to Restart Football in Spring, Even if Local COVID Infections are 'Substantial' 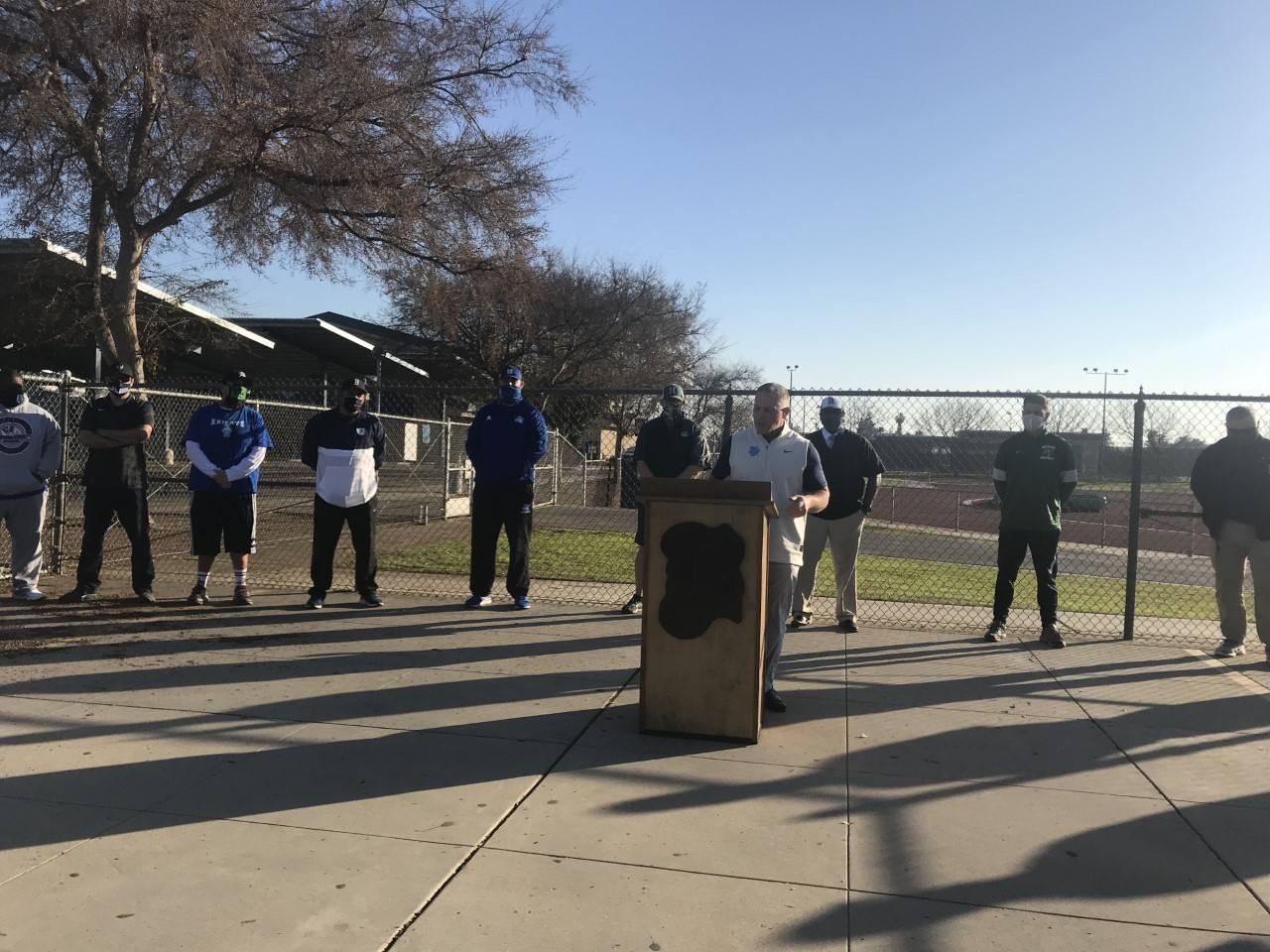 Fresno-area high school football coaches want to preserve at least part of the 2020-21 season for their student athletes and are proposing a spring schedule of games and playoffs, even if Fresno County is still in the red tier for COVID-19 infection rates.

The coaches, who talked about their proposal Wednesday afternoon next to the Bullard High School football field in northwest Fresno, say they are trying to salvage a season decimated by the coronavirus pandemic and to give some hope to student athletes.

Mostly, they’re trying to get the California Interscholastic Federation, which oversees high school sports, to consider other scheduling options for football and fall sports and not be bound to deadlines that are fast approaching.

There’s no need to cancel seasons now if there’s a chance that infection rates could drop in time to get in some games later in the semester, the coaches said.

Coaches say they are seeing firsthand the depression, anxiety, and even suicidal thoughts that some student-athletes are suffering because they have been barred from participating in sports due to the coronavirus.

The loss of sports has had the most impact on lower-income students, many of whom are students of color whose parents can’t afford to pay the fees for club sports that have continued to compete during the pandemic — even though numerous players have wound up being infected.

Those club sports, which don’t follow the same protocols or restrictions that public school teams are under, have continued to play during the pandemic, even traveling to competitions in Arizona and Florida, said Bullard High coach Don Arax.

The Fresno-area coaches have been circulating petitions to parents seeking their support for scheduling practices and games once the county is in the state’s red COVID reopening tier. Under California’s Blueprint for a Safer Economy the red tier reflects “substantial” COVID spread in a community.

The Fresno County health department and the CIF both say high school football should not resume until local jurisdictions have reached the orange tier, one level below red, which indicates “moderate” spread of the virus.

Fresno County returned to the most restrictive purple tier — meaning COVID is “widespread” — last fall, and has remained there in the face of skyrocketing infection and hospitalization rates.

A few dozen parents and other supporters participated last Friday in a “Let Them Play” protest outside the Fresno County Department of Public Health in downtown Fresno.

The coaches have developed four schedules that are contingent on a decrease in coronavirus cases that would enable practices and games to be held with a lowered risk of infection. They did not provide details, however, on how low the numbers would have to be.

Hoover High football coach Rustin Pickett outlined the four scheduling scenarios that the coaches have devised. He acknowledged that the first, which would start practices on Feb. 8 and end with playoffs through mid- to late April, already seems out of reach based on current coronavirus infection rates.

But the other schedules. which could include playing football into June, are still possible with some flexibility this year as well as for the football season next fall, Pickett said. “We don’t want zero this year,” he said.

However, if Fresno County is still in the purple tier of the state’s reopening plan by April, “then we’re done,” Arax said.

School districts are following the guidelines set by state and county health officials and don’t support the coaches’ proposal to schedule games while the county is in the red tier.

“Fresno Unified joins coaches, student athletes and their families in wanting to get back to school and the playing field, but it must be done in a way that doesn’t further escalate the dire health conditions facing Fresno County and our healthcare system or the well-being of our Fresno Unified family,” district spokeswoman Amy Idsvoog said in an email Wednesday to GV Wire℠. “While we respect the spirit of our coaches who have joined together in support of student athletes, the California Interscholastic Federation (CIF) has stated it is not changing its current position.”

Idsvoog said the district has not yet seen the coaches’ proposal.

“Our stance continues to be that we are following our already approved return to play plans and working with the county to follow protocols they have established,” she said.

“Central Unified recognizes how difficult the pandemic has been for our student-athletes, families and coaches and we hope the future meeting with CIF will provide more clarity on high school athletics this school year,” Dosti said in an email.

Some Sports Can Resume in Red Tier

Dr. Rais Vohra, Fresno County’s interim health officer, said it’s important to maintain the guidelines, which permit scrimmages with players getting closer than 6 feet for contact sports such as football once the county reaches the orange tier. Other sports where athletes can keep a distance such as tennis or swimming may resume sooner.

Right now all practices and competitions are supposed to be halted because the county is under a regional stay-at-home order with infections and hospital capacity at a crisis level, Vohra said.

“Because of the COVID-19 pandemic and the ongoing surge in hospitalizations and deaths that the county is experiencing, it is essential that we all continue to take steps to reduce the spread of this deadly virus, which includes limitations on higher-risk activities such as some team sports,” he said in an email.