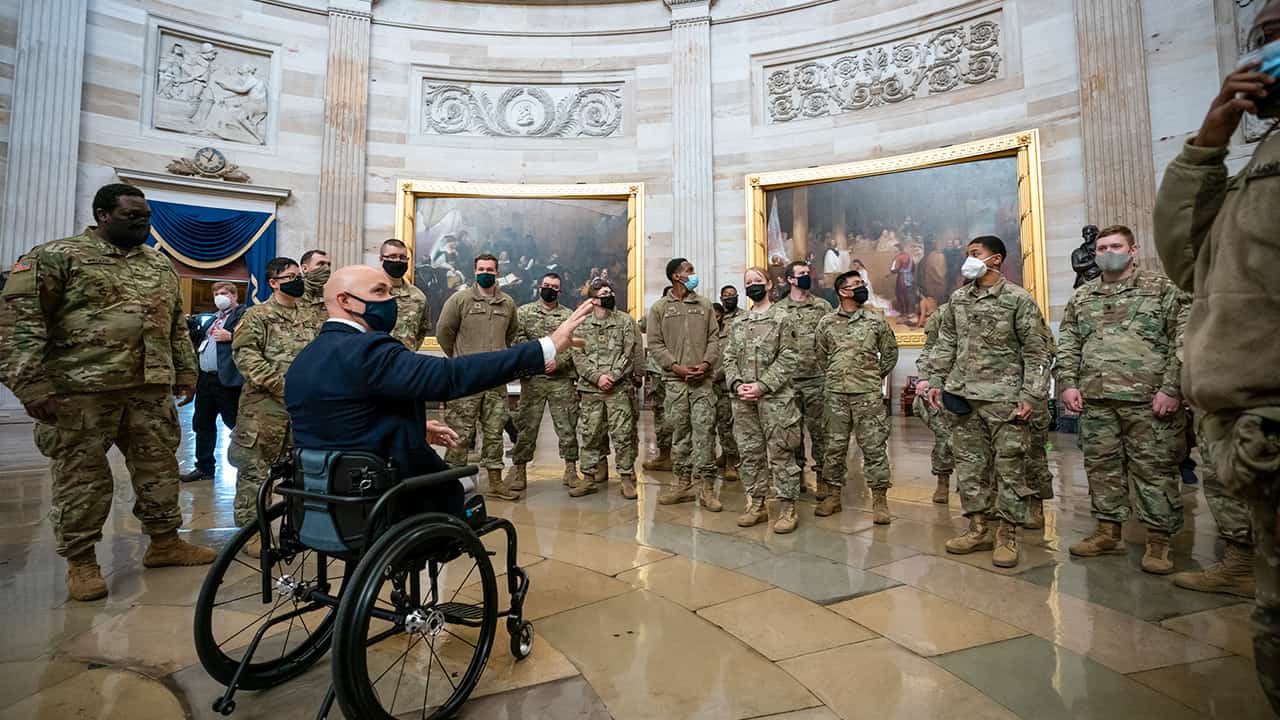 WASHINGTON — The scene in the U.S. Capitol seemed jarringly disconnected. Inside the House chamber, the nation’s lawmakers spoke with solemnity about democracy, the rule of law and the words of Abraham Lincoln as they undertook a vote to remove the president from office.

They wore masks, a rule imposed by Democrats, as a measure of the pandemic that continues to ravage the country.

But only steps away, outside the chamber doors, there was the look of an armed encampment.

The House impeachment of President Donald Trump for inciting an insurrection on the home of the branch of government created in Article I of the Constitution contained arresting reminders of the violence and death wrought just a week ago and the fears that the Capitol needed enhanced protection to prevent it from happening again.

Where visitors once walked, hundreds of National Guard members camped out, protecting lawmakers still reeling from last week’s violence and preparing for the inauguration of President-elect Joe Biden.

The Capitol grounds were wrapped in seven-foot fences, and scores of other law enforcement officers and troops kept a watchful eye.

A replica of the dome that stands atop the Capitol, the Statue of Freedom, resides in the Capitol’s visitor center. Beneath it, soldiers slept on marble floors while others huddled to discuss their marching orders for the day.

They massed together from one end of the giant hall to the other and their numbers made it impossible to follow the signs calling for social distancing. To protect from COVID, they wore masks, and to protect from potential violence, they stockpiled riot shields and gas masks.

Republican Rep. Brian Mast of Florida, a military veteran who lost both legs in the war in Afghanistan, was shocked at the sight of so many soldiers.

“It’s as sad as anything can make me in this world,” Mast said as he gave some of them a tour.

The Capitol always sees stepped-up security precautions leading up to an inauguration, but it rarely looks like the nation is on a war footing.

But along with the signs of fear, there were also signs of gratefulness for those protecting the Capitol. A tunnel leading to House office buildings has become a makeshift tribute to members of law enforcement who protected the Capitol when a violent mob overran the building in an attempt to derail the certification of Electoral College votes in the president election. More than 50 police officers were injured in the attack, including 15 who were hospitalized. One was killed.

“Thank you for keeping my mommy safe,” said a poster with smiley faces and stars and signed by “Clair Age 8.”

The thank you signs poured in from all ranks and political parties, including a letter from the office of Senate Majority Leader Mitch McConnell, R-Ky. “We would not be here without you,” said another poster signed “thank you from AOC,” the initials for Rep. Alexandria Ocasio-Cortez, D.-N.Y.

Outside of the Capitol, members of the National Guard — many carrying semi-automatic assault rifles — are supplementing the work of the U.S. Capitol Police, forming perimeters around each of the office buildings that lawmakers and their staffs use when not in the Capitol for votes. The number of entrances into the buildings has been dramatically diminished and those approaching must present a credential to get in.

The tensions were also apparent inside the House chamber. Beginning Tuesday, lawmakers had to walk through a metal detector before being allowed to enter the chamber. Members of Congress have previously enjoyed nearly free range at the Capitol, able to bypass security screening stations at most entrances to the building. In the House chamber, there have been Capitol Police officers and civilian door monitors but no screening stations. Reporters had to do the same to enter the galleries above the chamber.

As the debate over whether to impeach Trump ensued in the afternoon on the House floor, one side called for unity, the other accountability. It’s very much unclear whether either will happen.

“This is a moment of truth my friends,” said Rep. Gerry Connolly, D-Va. “Are you on the side of chaos and the mob, or on the side of constitutional democracy and our freedom?”

“If we impeached every politician who gave a fiery speech to a crowd of partisans, this Capitol would be deserted. That’s what the president did, that is all he did,” said Rep. Tom McClintock, R-Calif.

No. 3 House Republican Liz Cheney of Wyoming, who created a tempest inside the party by declaring she would support impeachment, quickly left after casting her “aye” vote. But another GOP impeachment backer, John Katko of New York, lingered for a bit near a desk with a terminal that keeps a tally.

House Speaker Nancy Pelosi gaveled the vote and announced the tally — but only after waiting for California Democratic ally Maxine Waters, a strong opponent of Trump, to cast the 232nd and final vote to impeach him.

As Pelosi announced the vote count, there was hardly a sound, a single clap from one or two in the audience that was quickly replaced by silence as most members heading for the exits.