Hours after sheltering in place in the House of Representative, Congressman Jim Costa said rioters who breached the U.S. Capitol are “traitorous.”

Costa (D-Fresno) spoke to the media from his Washington, DC office via Zoom. The Capitol was in lockdown and a 6 p.m. curfew in the District was already in effect. He was planning to return to the House later in the evening to fulfill Congress’s constitutionally-mandated role to certify the Electoral College vote.

The process was disrupted by the rioters after a speech President Donald Trump gave at a rally.

“Today is a sad day because it has been a day in which a group of traitorous folks have taken it upon themselves to storm the Capitol,” Costa said. 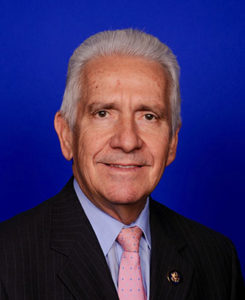 “We were not properly prepared and we should have been. It has been known for weeks that these protesters were going to come here.”–Congressman Jim Costa (D-Fresno)

While he supports First Amendment activity, he said protesters took it too far.

“We saw a group of people that decided that they would take the law into their own hands and take upon a treasonous act, because that’s what this is, a treasonous act to, in fact, thwart the will of the voters of the United States,” Costa said.

“We were not properly prepared and we should have been. It has been known for weeks that these protesters were going to come here,” says Costa.

He says protestors are not an unusual sight at the Capitol, and he’s seen plenty of them during his 16 years there.

“It’s every American’s right to come and peacefully demonstrate and let their views be known,” says Costa. “But we know that, in fact, the President urged these folks on.”

Costa says over the next several weeks he and others will look very closely at the actions of Capitol police on Wednesday to ensure this type of scenario never plays out again.

Impeachment Unlikely, But Would Support Censure

Costa placed the blame of today’s actions on Trump.

“It’s unacceptable for our president to cheer these folks on as somehow this was a football game. It’s not. It’s our country. It’s our democracy. It’s our basic foundations of the freedom we hold most dear,” Costa said. “We looked like for a short period of time a third world banana republic,” Costa said.

Costa doubted the effectiveness of impeachment proceedings against Trump, with just two weeks remaining in the president’s term.

“I think it’s time to close this chapter. There may be a measure of censure. And if there is, I will certainly support that. But at this point in time, we need to move on. We need to heal the wounds that have been created and the divisions that seems to be the hallmark of this presidency,” Costa said.

Costa doubted anyone in Trump’s cabinet would evoke the 25th Amendment, which allows for removal of a president if it’s determined he is unable to perform the duties of his office.

“I don’t think there’s any members of the president’s cabinet that have enough profiles in courage to pursue that action,” Costa said.

Costa was in the gallery of the House watching the debate about electoral votes from Arizona.

“We began hearing noises taking place outside. And we heard a couple of efforts that there were activities out on the Capitol grounds, but that we should remain in place,” Costa said.

As rioters broke into the building, evacuations started in the chambers — first on the floor, then in the gallery where Costa was at.

Costa was prepared to don a gas mask, placed under seats in the chamber since 9/11.

“They began to storm those doors in which Capitol police then were on the other side and we were all asked to to hit the ground or are the floor, I should say,” Costa said.

After about 15 minutes, Costa and other members of Congress were escorted out to a secure site.

“Who knows what further mayhem may have taken place?” Costa said. “It was just so disheartening.”

“The attempt to take over one branch of our American government to provide a overthrow of a fair and free election that took place two months ago has failed. And we will go back into session tonight and we will certify the rest of the Electoral College ballots that have been submitted by all 50 states,” Costa said.

A Moment in America, Unimaginable but Perhaps Inevitable