The Tower Theatre, the namesake and anchor of the Tower District in Fresno, is for sale, and neighbors are concerned about rumors of who the new owners may be.

A flyer from KW Commercial, a real estate broker, lists the asking price as $6.5 million.

According to buzz on social media, Adventure Church may be the buyer. The church already conducts Sunday services at the theater.

Neither the theater — owned for years by the Abbate family — nor the church responded to GV Wire’s request for comment.

Posts on social media raise concerns about the church’s perceived attitude toward the LGBT community and its potential impact on nearby businesses that sell alcohol.

Fresno/Tower District folks: I know little about the church looking to buy Tower Theater, but have heard that they’re very conservative and anti-LGBTQ+. Is anyone able to confirm? Links would be rad and highly appreciated. 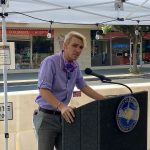 “Bars and nightclubs can’t move in next door to your church or school for very good reason. Likewise, the reverse should not be true either.” — Tyler Mackey, Tower District Marketing Committee

For Tyler Mackey — executive director of the Tower District Marketing Committee — the concern of a church-owned Tower Theatre isn’t about ideology as it is about practicality.

“It would not affect existing conditional use permits for liquor that surround (the theater). But should any of those guys attempt to sell, they would not be able to sell their liquor license, which would devalue their businesses,” Mackey said.

Generally, liquor is not allowed to be sold if it is near a church.

“Bars and nightclubs can’t move in next door to your church or school for very good reason. Likewise, the reverse should not be true either,” Mackey said.

Mackey is also concerned that if a church owned the theater, it would not hold as many cultural and arts events that draw tens of thousands to the Tower District and its businesses.

“Even a thousand church parishioners would not have the same economic impact,” Mackey said.

Not About a Church Nor Ideology

Several comments on social media are concerned about a perceived LGBT-bias the church may have. Some of that may be based on an item found at Gay Central Valley, but GV Wire℠ has not been able to independently confirm the sale or details about the church’s policies.

The Tower District is known for its LGBT-friendly events, including a gay pride parade and the Pride Film Festival. Mackey concedes, though, that the owner of the theater has a right to determine what types of programming or shows are presented.

Mackey said the church’s views are irrelevant. He has doubts the area at the corner of Olive and Wishon avenues is even zoned for a religious institution.

Councilman Miguel Arias is aware of the concerns. He says the city is exploring if the church would need a conditional use permit and other factors related to a possible sale.

Mackey would prefer an entertainment company purchase the theater, but said he does not want to stand in the way of the Abbate family selling.

Mackey has started a Facebook page “Save the Tower Theater.”