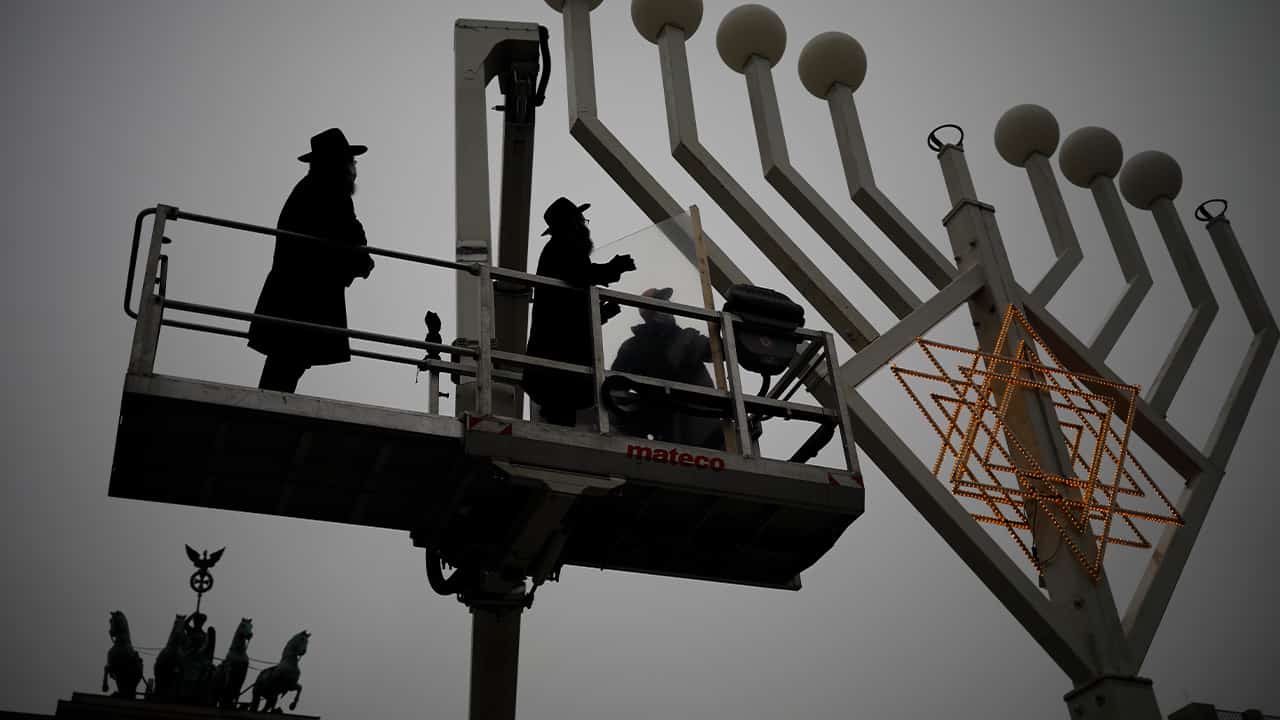 Jewish Americans from a variety of branches of the faith are celebrating Hanukkah with smaller-than-usual gatherings this year, in hopes of keeping the year-end holiday safe but still joyful as coronavirus cases spike across the country.

Many Jewish Americans are already accustomed to more intimate celebrations of a holiday focused more on the home than on the synagogue, including Haredim or ultra-Orthodox communities. So the recent successful Supreme Court challenge to New York restrictions on in-person worship by some Orthodox groups won’t mean much as far as their Hanukkah plans.

But celebrating Hanukkah during a pandemic still poses a challenge to some Jewish Americans, for whom the holiday has risen in prominence in part because its social elements and timing line up with non-Jewish holidays such as Christmas.

That has often provided a reason to host get-togethers, said Rabbi Avi Shafran, director of public affairs at Agudath Israel of America, a plaintiff in the court case.

But such large gatherings are “not an essential part of the holiday on any level whatsoever,” he added. “So to Haredim, to us ultra-Orthodox, it’s not something that’s going to cramp our style.”

Hanukkah is not affected by the restrictions on electronic device usage that observant Jews heed during the sabbath and holy days, allowing for virtual celebrations.

So, like many others, Shafran and his wife, who have nine children and 50 grandchildren, celebrated with some of them via Zoom this year in a nod to health recommendations — “just as festive … because the meaning of the holiday is not parties, it’s the memory of ancient times,” Shafran said.

Before he lit the candles of the branched candelabra called a menorah, he recited blessings, including one expressing gratitude to God for life: “This year,” Shafran said, “we really have to thank God.”

“Family gatherings are going to be limited, with or without the Supreme Court decision,” he said.

The eight-day holiday beginning Thursday at sunset, also known as the Jewish Festival of Lights, honors the rededication of the Second Temple in Jerusalem during the second century B.C. following victory over the Syrians. Celebrated with the nightly lighting of the menorah, it usually falls in December but sometimes in late November.

Hauer linked Hanukkah’s underlying message of the Jewish people’s endurance, “the triumph of the spirit against tremendous odds,” to the present-day coronavirus crisis.

“There’s been a tremendous power of the spirit to continue to practice and continue to worship and celebrate, and find new ways to celebrate,” he said.

Rabbi Daniel Sherman of Temple Sinai, which describes itself as New Orleans’ oldest Reform congregation, said it has been more difficult to adapt other holidays on the Jewish calendar to the constraints of the pandemic.

Still, Sherman added, “people are used to having friends and family over for those home celebrations, and this year the challenge is to have that Hanukkah spirit still, even though it might just be your immediate family or you might just be by yourself.”

Hanukkah Is More of a Minor Holiday in Israel

For Esther Reisman, who teaches Bible studies and Jewish history at Beth Jacob Academy in Brooklyn, Hanukkah gatherings with extended family can typically include dozens of people. But this year it may be just her and her husband, Rabbi Yisroel Reisman of Agudath Israel of Madison, also a plaintiff in the Supreme Court case.

“It will be much, much smaller,” she said, adding that many others in their community were planning intimate gatherings just with immediate family members. Reisman’s family was also consulting a specialist in infectious disease to minimize any risk, she said.

Hanukkah is more of a minor holiday in Israel, though it is still a festive occasion marked by communal candle-lighting gatherings, school vacation and the consumption of deep-fried, and often elaborately decorated, doughnuts known as sufganiyot.

With confirmed coronavirus cases quickly rising, the Israeli government this week announced plans for a nighttime curfew to prevent large public gatherings but subsequently backtracked. Instead, it has encouraged people to celebrate at home with their immediate families.

In the U.S., the holiday can take on a Christmas-like quality in some Jewish communities. In Ohio, Chabad Columbus is planning outdoor events designed for families to attend at a safe distance, including a menorah-lighting via helicopter performed by a man costumed as a member of the Maccabee family, which plays a central role in the Hanukkah story.

Rabbi Hara Person, the chief executive of the Central Conference of American Rabbis, urged celebrants everywhere to remain “very cognizant about what our home gatherings look like” in the pandemic context.