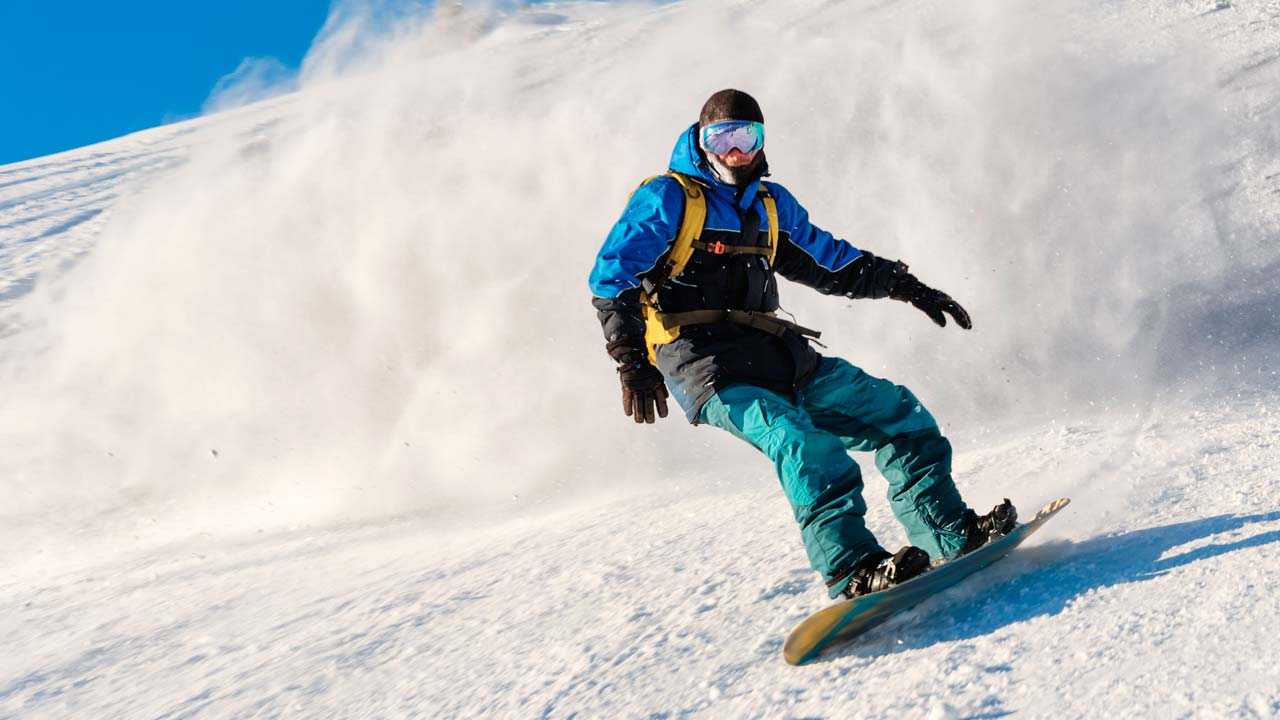 China Peak Ski Resort is making new snow over the next couple of nights in preparation for a planned Saturday opening.

The popular Sierra ski and snowboard spot has invested millions of dollars in upgrades and is readying its runs as the winter sports season gets underway.

And, despite the likely imposition of a new regional COVID-19 stay-at-home order in the coming days, Gov. Gavin Newsom is encouraging California residents to go skiing. During a Thursday news conference, Newsom pointed to skiing and snowboarding as beneficial exercise options for maintain positive mental health to counter stresses brought on by the pandemic.

“We want to encourage activity,” Newsom said. “Activity, again, that’s not focused indoors — not in congregate facilities, not where there’s a tremendous amount of mixing – but outdoors.” 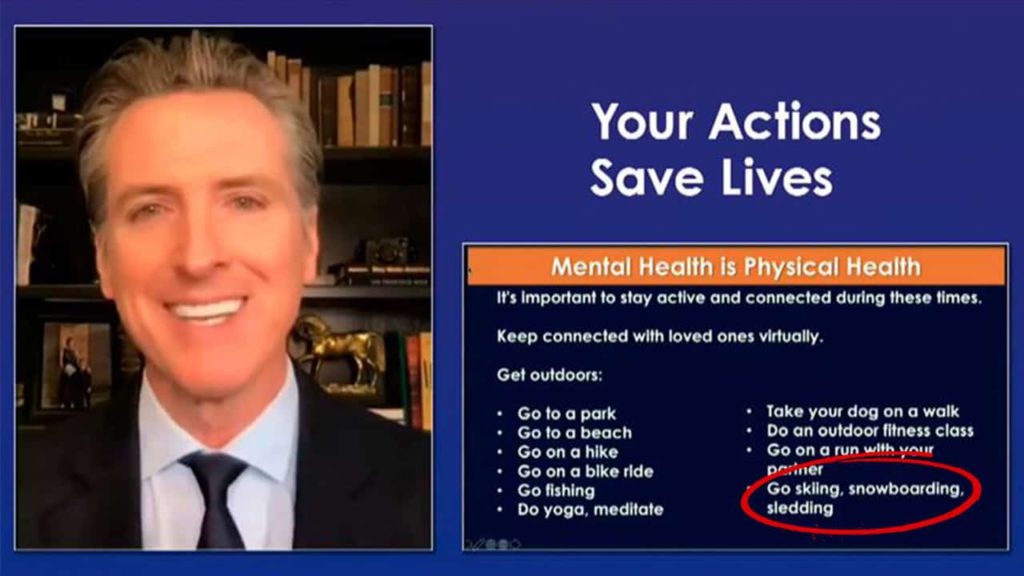 Despite outlining a news regional stay at home order Thursday that could go into effect within days, Gov. Gavin Newsom encouraged outdoor activity — including skiing and snowboarding — to help maintain good mental health during the pandemic. (Screen capture via Facebook)

China Peak’s snowmaking machines are at work nightly building up runs at the mountain’s middle and lower elevations, according to the resort’s website.

“Snowmaking temperatures are hard to predict but we will continue to produce snow at every opportunity,” a post on the website said. “If temperatures are better on the lower half of the mountain, we’ll focus on Sundown Ridge, Lower Academy, Middle Tollhouse and the beginner hill. If we see the inversion break down where temperatures at the higher elevations drop we will quickly move to Kaiser/Chair 2 and Dynamite/Chair 1.”

Managing partner Tim Cohee says there’s still a lot of work to do, but he is optimistic for a successful season. The resort has invested $3.5 million in additional snowmaking coverage this year and has added a new tubing hill and expanded the deck at its midmountain Buckhorn Bar and Grill.

“The big investment in the last few years, of course, has been this new state of the art snowmaking system,” Cohee said. “We have invested in a big system. We now have large scale snowmaking, lots of pumping capacity, access to water on on all of our lifts and several of our major runs.” “We have invested in a big system. We now have large scale snowmaking, lots of pumping capacity, access to water on on all of our lifts and several of our major runs.”–China Peak managing partner Tim Cohee

After suffering some damage from the Creek Fire that forced China Peak to move operations off the mountain, Cohee’s team has returned. “This is great for our staff and our customers, as this has been a painful 13 weeks,” the resort posted in a blog.

Cohee says all he needs now is for the thermometer to cooperate.

“There’s no reason why we won’t have all major lifts open by Christmas and even before then, if it stays cold,” he said.

The National Weather Service in Hanford says the temperature forecast is promising, though there is no likelihood of natural snow for the slopes in the near term.

“At least for the next week it’s remaining dry for the extended models,” says meteorologist Modesto Vasquez. “Not much for China Peak.”

But on the subject of temperatures, “He’ll be fortunate for that,” said Vasquez.

Overnight lows are expected to continue in the upper 20s, reaching only into the mid 50s during the day, forecasts show. 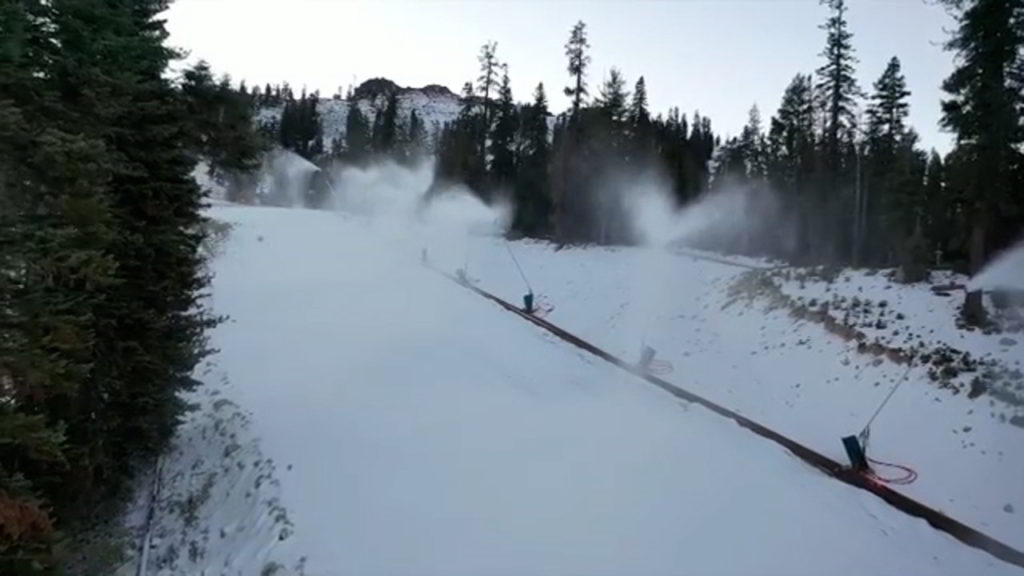 China Peak owns large scale snowmaking equipment, has added pumping capacity and has access to water on all of the resort’s lifts and on major runs. (China Peak Instagram)

While hopeful, Cohee isn’t too worried about the financial aspect because he says when China Peak does get snow it’s highly profitable and makes up for the bad years.

“The other thing we do is self finance everything,” explains Cohee. He’s also got a couple of business partners that help him. One of the partners is in Fresno and is keen on providing any short term financing the resort might need. “We’ve always have been able to pay that back 100 percent,” said Cohee.

KRON-TV reports many Tahoe resorts have already opened for the season with modified operations. All Vail owned resorts, which include Northstar and Heavenly, have a reservation system in place.

For those hoping the Badger Pass ski area in Yosemite National Park would also open soon, the news is disappointing. “Due to ongoing concerns related to COVID-19, Badger Pass Ski Area will not open for the 2020-21 season,” an online message says.

Cohee says the Creek Fire did some damage to the back of the resort where the employee housing is. The ski area itself suffered no damage at all.

“There were there were a tremendous amount of fire staff on the ski area a lot of the time, even after the fire had had pretty much left the region and we were dealing with just this hot spot,” says Cohee. “We lost employee housing units in the back. We lost some personal trailers. We lost vehicles. I think by the time that the damage is finished will be under a million dollars.”

He says that’s a far cry from the $40 million that could have been lost if the ski lifts, snowmaking machine, buildings, lodges, hotel, and restaurant had burned. “There was clearly a conscious effort (by fire crews) to make sure that the commercial sites of Shaver and Huntington were protected because that’s the end of the economy,” says Cohee.