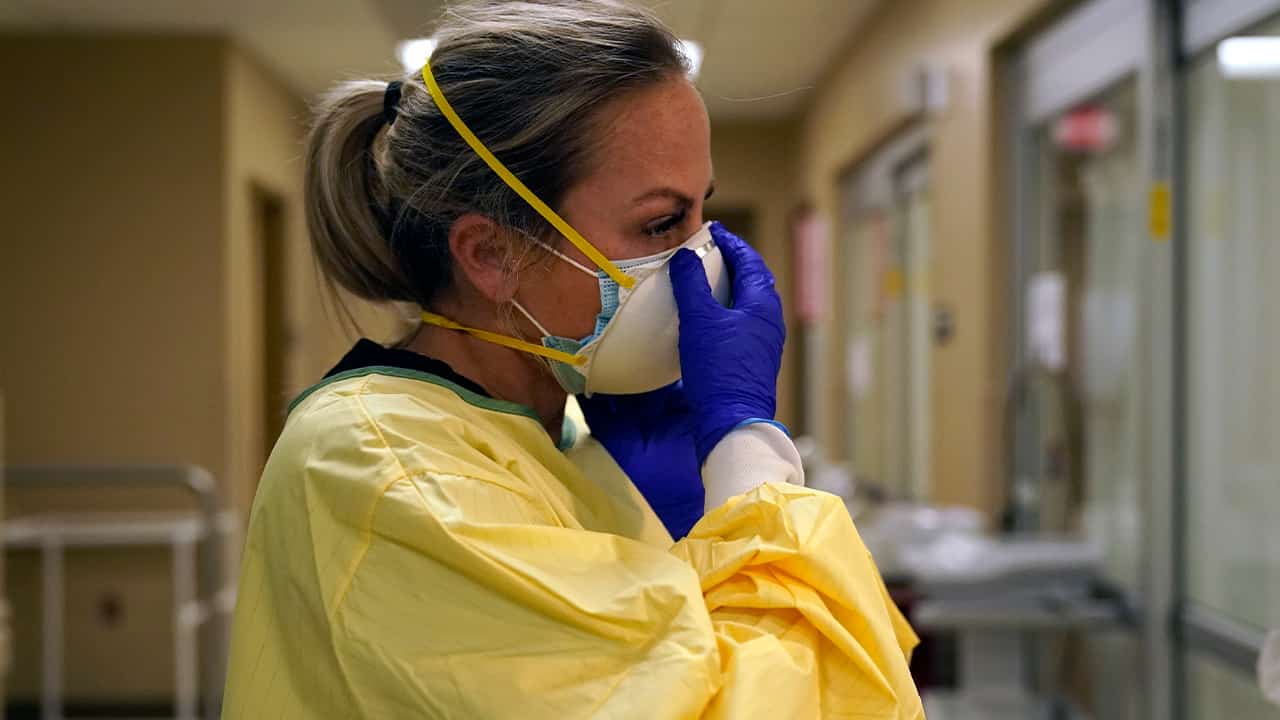 OMAHA, Neb. — U.S. hospitals slammed with COVID-19 patients are trying to lure nurses and doctors out of retirement, recruiting students and new graduates who have yet to earn their licenses and offering eye-popping salaries in a desperate bid to ease staffing shortages.

With the virus surging from coast to coast, the number of patients in the hospital with the virus has more than doubled over the past month to a record high of nearly 100,000, pushing medical centers and health care workers to the breaking point.

Governors in hard-hit states like Wisconsin and Nebraska are making it easier for retired nurses to come back, including by waiving licensing requirements and fees, though it can be a tough sell for older nurses, who would be in more danger than many of their colleagues if they contracted the virus.

Some are taking jobs that don’t involve working directly with patients to free up front-line nurses, McMillan said.

Iowa is allowing temporary, emergency licenses for new nurses who have met the state’s educational requirements but haven’t yet taken the state licensing exam. Some Minnesota hospitals are offering winter internships to nursing students to boost their staffs. The internships are typically offered in the summer but were canceled this year because of COVID-19.

Methodist Hospital in Minneapolis will place 25 interns for one to two months to work with COVID-19 patients, though certain tasks will remain off-limits, such as inserting IVs or urinary catheters, said Tina Kvalheim, a nurse who runs the program.

“They’ll be fully supported in their roles so that our patients receive the best possible, safe care,” Kvalheim said.

Landon Brown, 21, of Des Moines, Iowa, a senior nursing student at Minnesota State University, Mankato, recently accepted an internship at the Mayo Clinic in Mankato. He was assigned to the pediatric unit’s medical-surgical area but said he might come across patients with the coronavirus.

Brown’s resolve to help patients as a nurse was reaffirmed after his 90-year-old grandfather contracted the virus and died over the weekend.

“The staff that he had were great, and they really took a lot of pressure off of my folks and my family,” he said. “I think that if I can be that for another family, that would be great.”

The University of Iowa’s College of Nursing is also trying to get graduates into the workforce quickly. It worked to fast-track students’ transcripts to the Iowa Board of Nursing so they could get licensed sooner upon graduating, said Anita Nicholson, associate dean for undergraduate programs.

Nicholson said the college also scheduled senior internships earlier than normal and created a program that allows students to gain hospital experience under a nurse’s supervision. Those students aren’t caring for coronavirus patients, but their work frees up nurses to do so, Nicholson said.

“The sooner we can get our graduates out and into the workforce, the better,” she said.

Wausau, Wisconsin-based Aspirus Health Care is offering signing bonuses of up to $15,000 for nurses with a year of experience.

Hospitals also are turning to nurses who travel from state to state. But that’s expensive, because hospitals around the country are competing for them, driving salaries as high as $6,200 per week, according to postings for travel nursing jobs.

April Hansen, executive vice president at San Diego-based Aya Healthcare, said there are now 31,000 openings for travel nurses, more than twice the number being sought when the pandemic surged in the spring.

“It is crazy,” Hansen said. “It doesn’t matter if you are rural or urban, if you are an Indian health facility or an academic medical center or anything in between. … All facilities are experiencing increased demand right now.”

Nurses who work in intensive care and on medical-surgical floors are the most in demand. Employers also are willing to pay extra for nurses who can show up on short notice and work 48 or 60 hours per week instead of the standard 36.

Laura Cutolo, a 32-year-old emergency room and ICU nurse from Gilbert, Arizona, began travel nursing when the pandemic began, landing in New York during the deadliest stretch of the U.S. outbreak last spring. She is now working in Green Bay, Wisconsin, and soon will return to New York.

Doctors Are in Demand, Too

She said she hopes her work will be an example to her children, now 2 and 5, when the crisis passes into history and they read about it someday.

“If they ask me, ’Where were you?’ I can be proud of where I was and what I did,” Cutolo said.

Doctors are in demand, too.

“I don’t even practice anymore, and I’ve gotten lots of emails asking me to travel across the country to work in ERs,” said Dr. Georges Benjamin, executive director of the American Public Health Association.

States are seeing record-breaking surges in deaths, including Illinois, Indiana and Kentucky in the middle of the country. Kentucky Gov. Andy Beshear said the virus is “spreading like wildfire.”

A COVID-19 vaccine is expected to become available in a few weeks, and health care workers are likely to be given priority for the first shots. That could make it easier for hospitals to recruit help.

To make room for the sickest, hard-hit institutions are sending home some COVID-19 patients who otherwise would have been kept in the hospital. They are also canceling elective surgeries or sending adult non-COVID-19 patients to pediatric hospitals.

A hospital system in Idaho is sending some COVID-19 patients home with iPads, supplemental oxygen, blood pressure cuffs and oxygen monitors so they can finish recovering in their own beds. The computer tablets enable nurses to check in with them, and the oxygen monitors automatically send back vital information.

Across the U.S., hospitals are converting cafeterias, waiting rooms, even a parking garage to patient treatment areas. Some states are opening field hospitals.

But that does nothing to ease the staffing shortage, especially in rural areas where officials say many people aren’t taking basic precautions against the virus.

Dr. Eli Perencevich, an epidemiology and internal medicine professor at the University of Iowa, said health care workers are paying the price for other people’s refusal to wear masks.

“It’s sending everyone to war, really,” he said. “We’ve decided as a society that we’re going to take all the people in our health care system and pummel them because we have some insane idea about what freedom really is.”

Virus Deaths in US Top 3,100 in a Single Day for the First Time