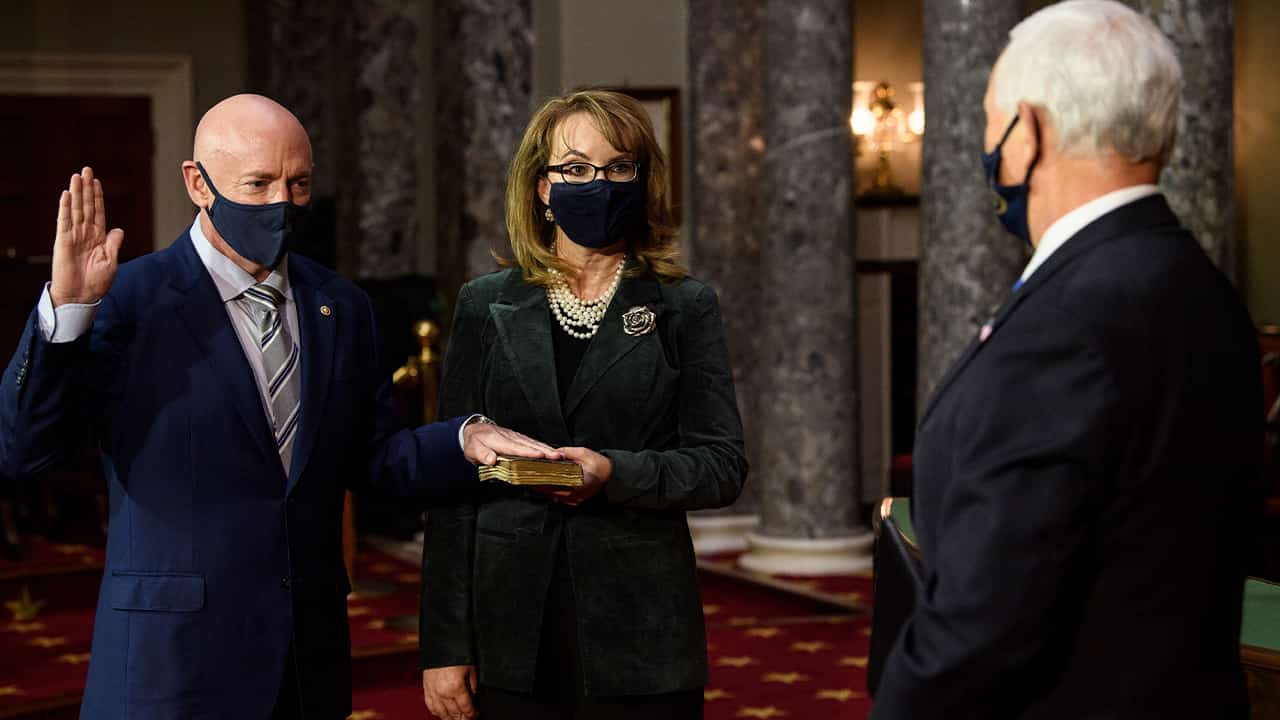 WASHINGTON — Arizona Democrat and former astronaut Mark Kelly was sworn into the Senate on Wednesday, narrowing Republican control of the chamber and underscoring his state’s shift from red to blue.

Kelly, 56, defeated GOP Sen. Martha McSally in last month’s election, making her one of only three incumbents to lose. By taking office, he has reduced the Republican edge in the chamber to 52-48.

That will have scant impact on Majority Leader Mitch McConnell’s control over the chamber for the final month of this congressional session. But it sets the stage for two pivotal Jan. 5 Senate runoff elections in Georgia.

If Democrats win both, they will command the 50-50 chamber for the new Congress that begins in early January because Vice President-elect Kamala Harris would cast tie-breaking votes.

Kelly cast himself as a problem-solving centrist during his campaign, and his slender 2 percentage point victory over McSally suggests he’ll want to be part of Democrats’ moderate wing.

In an interview, he praised the late Sen. John McCain, R-Ariz., a political maverick whose seat he now holds and whose grave he visited Tuesday at the U.S. Naval Academy in nearby Annapolis, Maryland.

He also voiced support for a push by bipartisan congressional moderates to pass a COVID-19 relief bill before Congress adjourns for the year. “I think something should happen now,” he said.

Kelly was sworn into office by Vice President Mike Pence, and both men wore masks and bumped arms in congratulations when the oath was over. Among those watching from the visitors’ gallery were his wife, former Rep. Gabby Giffords, D-Ariz., and Scott Kelly, his twin brother and fellow retired astronaut.

Kelly’s Arizona colleague, Democratic Sen. Kyrsten Sinema, held the Bible on which he took his oath. In what may be a Senate first for such ceremonies, Sinema, known for dramatic fashion, wore a zebra-striped coat and had purple hair, or perhaps a wig.

Kelly’s Senate arrival marks a political milestone for Arizona, which has two Democratic senators for the first time since January 1953. That is when GOP Sen. Barry Goldwater took office, barely a decade before he became his party’s unsuccessful 1964 presidential candidate.

In other evidence of Arizona’s political shift, the state backed President-elect Joe Biden last month, the first time a Democratic presidential candidate carried it since 1996.

McSally was appointed to her seat in 2019 to replace McCain. Her appointment lasted only until last month’s special election was officially certified, which occurred this week. That cleared the way for Kelly to take office and fill the rest of McCain’s six-year term, meaning Kelly will face reelection in 2022.

Kelly was parachuting into a fractious lame-duck session in which lawmakers and President Donald Trump are so far deadlocked over whether to provide a pre-holiday COVID-19 relief package worth hundreds of billions of dollars. They’re also trying to address year-end budget work and a defense policy bill.

In what was one of the country’s most expensive Senate races, Kelly raised $89 million. That was second only to the $108 million collected by defeated South Carolina Democratic Senate candidate Jaime Harrison, according to the nonpartisan Center for Responsive Politics.

Republican Cory Gardner of Colorado and Democrat Doug Jones of Alabama were the only other Senate incumbents defeated last month.

The son of two police officers, Kelly is a retired astronaut who flew four space missions, including spending time aboard the International Space Station. He was also a Navy pilot who flew combat missions during Operation Desert Storm in the early 1990s.

Giffords was grievously wounded in a 2011 mass shooting in which six people were killed and a dozen others hurt. She and Kelly became leading figures in unsuccessful efforts to pressure Congress to strengthen gun controls.

Kelly is the fourth astronaut to be elected to Congress. John Glenn was a Democratic senator from Ohio and Harrison Schmitt was a GOP senator from New Mexico. Republican Jack Swigert was elected to the House from Colorado, but died of cancer before taking office.

Related Topics:ArizonaastronautMark Kelly
Up Next

US Tightens Definition of Service Animals Allowed on Planes