'Baron of Bacon' Boldly Sets Up Shop with Endless Variety of Burgers. Here's a Sampling.

Who would open a specialty burger joint in the middle of a pandemic?

The founder and namesake of Slater’s 50/50 already planned to open his restaurant in Fresno pre-pandemic, signing his lease last year.

“Opening up a restaurant, the middle of pandemic sounds absolutely insane,” Slater said, on hand for the restaurant’s grand opening on Wednesday. “With the recent regulations and moving to the purple tier, it doesn’t look like we’re going to be getting out of that anytime soon. So what better time right now, right before the holidays get Slater’s 50/50 open?” 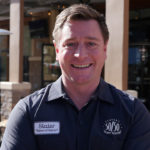 “Opening up a restaurant, the middle of pandemic sounds absolutely insane … So what better time right now, right before the holidays get Slater’s 50/50 open?” — Slater’s 50/50 founder Scott Slater

The Fresno location is the 14th to open and third since the pandemic. Slater’s hired 90 for its staff, many displaced because of the closure of other local restaurants.

Slater franchised his restaurant to a local ownership group. They invested $1 million in the former Anthropologie clothing store at the Fashion Fair Mall.

Seating is limited to the outside patios and a tent set up on the courtyard in front of the mall. Plenty of heaters are set up to provide warmth.

The restaurant’s slogan is “Bacon, Burger, Beer.” It offers 17 varieties of burgers, with the usual add-ons such as bacon, mushrooms and cheese. There is also a peanut-butter flavored burger. A build-your-own burger concept offers millions of possible combinations.

Another burger, available at the Fresno store only is the Fresno Farmhouse Burger. Stacked three-patties high, it is too much for even the biggest mouth. A definite fork-and-knife burger.

The burger includes an angus beef patty, a 50/50 (meat/bacon) patty and a fried chicken patty. It has two types of cheese — pepper jack and American — along with Nashville (spicy) slaw, pickled red onions, sautéed mushroom’s and Tapatio ranch sauce.

Burger prices range form $13.50 to $20. There are even non-meat options such as a Portobello mushroom burger and black bean veggie patty. Another Slater’s specialty is the variety of shakes.

While the base price is $12, they are big enough —and sweet enough — for four.

The Happy Happy Birthday Shake should not be consumed near flammable liquids. There is a literal sparkler exploding from the glass — do not mistake it for a straw.

The vanilla shake comes with a Twinkie and cupcake attached, with nerds encrusted on the outside of the glass.

“Wow. I can have those only once a month,” said one patron, on hand for the soft opening, when seeing the concoction. The Happy Happy Birthday Shake includes a Twinkie, a cupcake, lollipops and the glass encrusted with Nerds. (GV Wire/Jahz Tello)

On his business card, Slater calls himself the “Baron of Bacon.”

Prior to opening his restaurant, Slater sold concessions outside a Home Depot. He parlayed that into his first Slater’s 50/50 in Anaheim Hills in 2009.

“I’ve always been in the restaurant industry ever since high school and working my way through college. And it’s just in your blood,” Slate said. “It’s obviously a pretty difficult time for our industry right now, but restaurants prevail and we plan on being here for quite a long time.”

He has expanded to other locations in southern California and three additional states.

“My brother-in-law actually lives here and he loves the brand. He’s always been begging me, ‘hey, build something out in Fresno.’  We found some great local ownership out here, and we found a perfect location here at the Fashion Fair Mall. And we said, let’s just go for it,” Slater said.

Slater says he resources his ingredients from local vendors. The buns come from Max’s Artisan Breads Bakery; the beef from Certified Meat Products. Of the 50 beers on top, 40 are from the Valley.

He said franchising the restaurant will ensure the quality of the food and customer service, since local ownership would have a stake in the success.

“We’re going to continue trying to spread the gospel of burgers, bacon and beer,” Slater said.