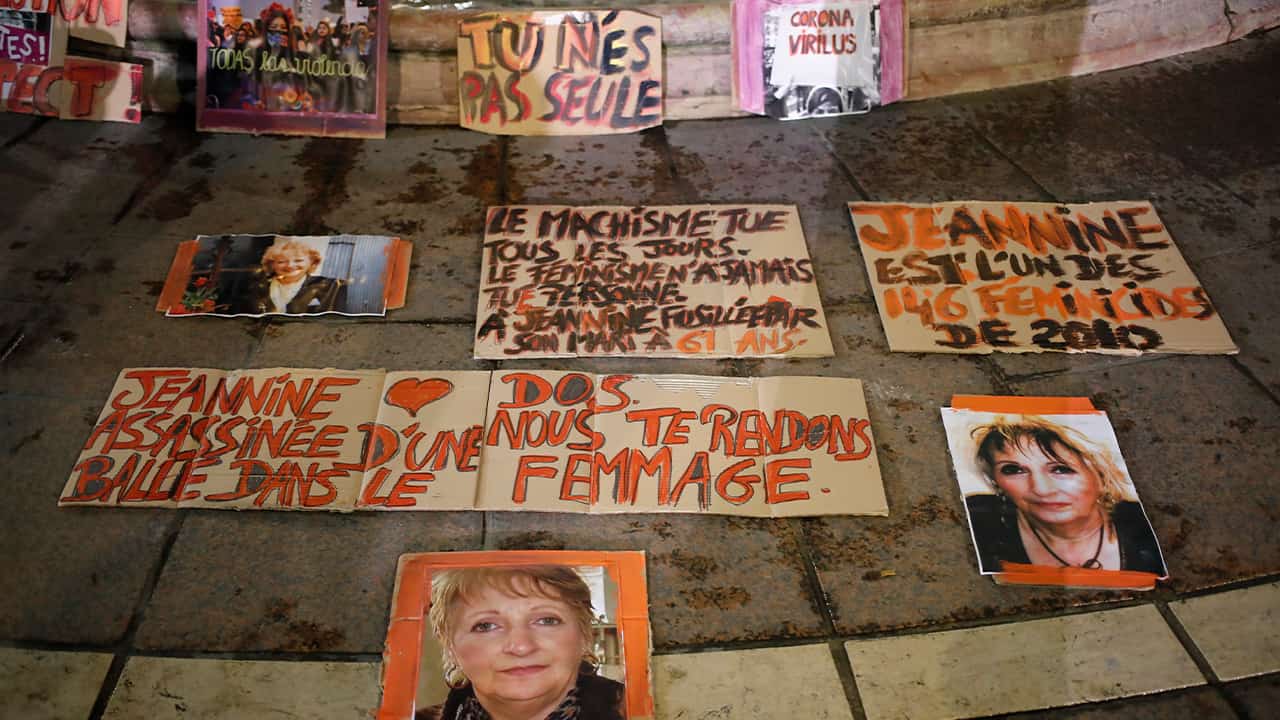 BRUSSELS — In a global push to end violence against women, activists held rallies Wednesday and world leaders called for action to stop the abuse, which has worsened because of the coronavirus pandemic this year.

Protests from France to Ukraine were held on the International Day for the Elimination of Violence against Women to draw attention to domestic violence in what is an uphill struggle to protect millions of women killed or abused every year by their partners and close relatives.

In Rome, the office of the prime minister was being lit in red and red banners tumbled from trade union offices in Florence to demand an end to violence against women. Italy was a hotbed for COVID-19 infections this year, forcing the government to impose lockdowns to keep the virus out. In an unintended consequence, domestic violence cases began to grow.

“Because of the restrictions, we involuntarily created profound distress,” that led to increased episodes of domestic violence and femicide, Prime Minister Giuseppe Conte told a parliamentary discussion on Italy’s long-standing problem with violence against women.

The Italian Health Ministry, citing data from national statistics agency ISTAT, said calls to domestic violence hotlines shot up during the lockdown, registering a 75% increase compared to the same period in 2019. Between March and June, calls and text messages to the anti-violence number more than doubled during the same period, to 119.6%

Together with Spanish Prime Minister Pedro Sánchez, Conte signed a joint declaration vowing to accelerate measures to stamp out violence against women, which they called “an invisible pandemic.”

In Ukraine, the Femen Feminist Activist Group Staged a Protest Outside the President’s Office

Even if detailed statistics were hard to come by, organizations and countries, from the United Nations to the European Union, France and Britain, all said that the pandemic had so far been an additional source for men to mistreat women.

In Ukraine, the Femen feminist activist group staged a protest outside the president’s office with a brief topless protest.

“We want to illustrate the situation with women’s rights in Ukrainian society — unprotected from any violence. We think the violence against women is a human rights violation, Femen activist Anya Alian said.

U.N. agency UNAIDS said that “evidence shows that the COVID-19 pandemic has resulted in significant increases in gender-based violence in nearly all countries,” especially for women trapped at home with their abuser.

“Men’s violence against women is also a pandemic — one that pre-dates the virus and will outlive it,” said Phumzile Mlambo-Ngcuka, executive director of the U.N. Women agency. “Last year alone, 243 million women and girls experienced sexual or physical violence from their partner. This year, reports of increased domestic violence, cyberbullying, child marriages, sexual harassment and sexual violence have flooded in,” she said.

In Turkey, where at least 234 women were killed since the start of the year, according to government figures, riot police in Istanbul blocked a small group of demonstrators from marching to the city’s iconic Taksim Square to denounce violence against women. The government has declared the square off-bounds for demonstrations.

Elsewhere in Istanbul, some 2,000 other women staged a peaceful demonstration calling on President Recep Tayyip Erdogan’s government to remain committed to a European treaty on combatting violence against women. Earlier this year, some officials from Erdogan’s Islam-oriented party had spoken in favor of reviewing the agreement to adapt it to Turkey’s more conservative family values.

Pope Francis marked the day by tweeting: “Too often women are offended, mistreated, raped and forced to prostitute themselves … If we want a better world, a home of peace and not a courtyard of war, we all must do much more for the dignity of each woman.”

France’s Deal With TikTok Is Among Multiple Measures

France’s deal with TikTok is among multiple measures it has taken since a national reckoning over domestic violence last year prompted by an unusually high number of women killed by their husbands, boyfriends or former partners. Activists say more needs to be done.

France’s minister for equal rights, Elisabeth Moreno, said that reports of domestic violence registered with the government rose 42% during France’s first virus lockdown in the spring, and have risen 15% since a new lockdown was imposed nearly a month ago. Given that most people don’t report such abuse, the real rise is believed to be higher.

In Britain, The Office for National Statistics said police recorded 259,324 domestic abuse offenses between March and June, an increase of 18% compared to the same period in 2018. The charity Refuge said the number of people calling its domestic abuse hotline were 65% higher between April and June than in the first three months of the year, before lockdown.

“These appalling statistics show endemic levels of domestic abuse,” Labour Party crime spokesman Nick Thomas-Symonds said. “The COVID crisis didn’t create this scar on our society, but it has made the situation even worse.”

“The COVID-19 pandemic has shown how fragile the protective safety-net for victims of violence really is, especially when it comes to domestic violence,” said Petra Bayr (SOC, Austria), Chair of the Committee on Equality and Non-Discrimination of the Council of Europe Parliamentary Assembly (PACE). “The increase in violence during lockdown has been a shocking revelation in almost all our societies; it has put a magnifying glass on the harmful mindsets that still prevail.”