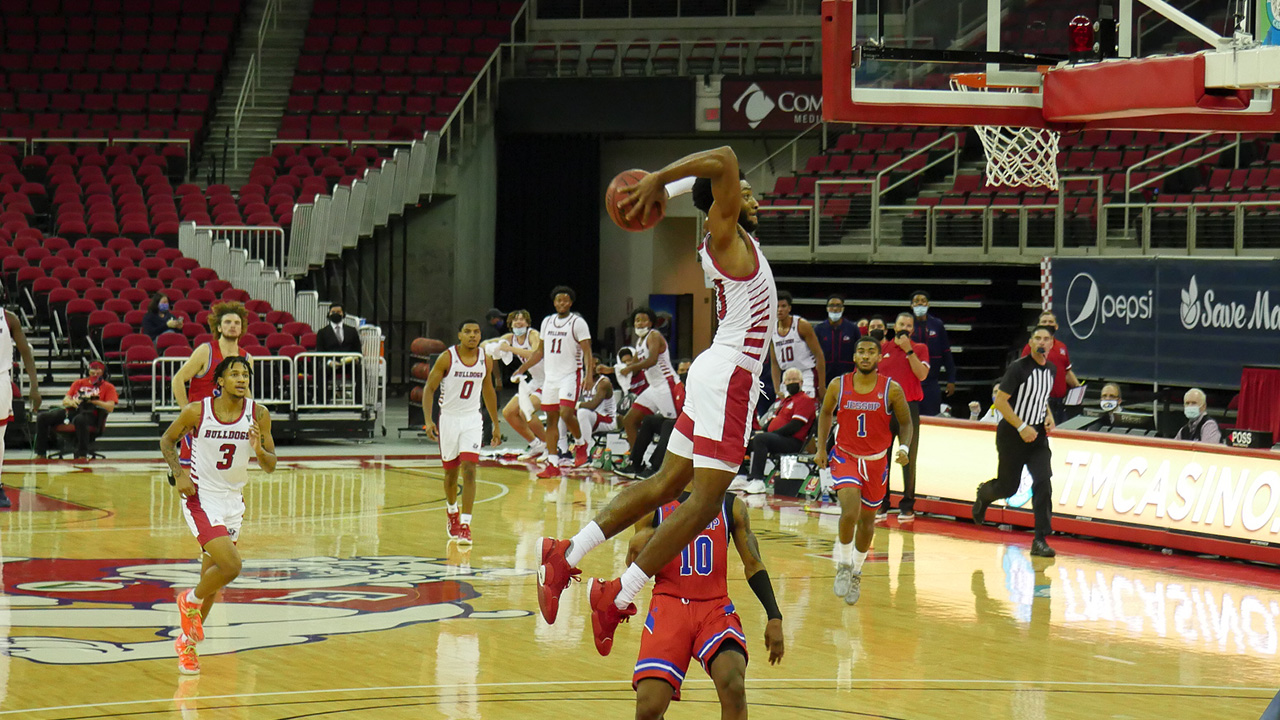 Whether the Bulldogs nailed a three, a steal and score or suffered a foul, the crowed noise at the Save Mart Center stayed at an even keel.

Instead of the roar of thousands from the Red Wave, an audio track of fan noise played on a loop instead. The cheers stayed at a static level, not increasing for when the Bulldogs succeeded nor booing when the referees’ calls went for the opponent.

The Bulldogs easily handled William Jessup University, 87-47, in the season tip-off for the men’s basketball team.

Attendance was down for the opener. Perhaps the drop could be attributed to the fact the game was played at 3 p.m. the day before Thanksgiving. Maybe it was because the opponent was William Jessup. Formerly San Jose Bible College and San Jose Christian College, it was renamed after the campus president when it moved from San Jose to Rocklin in 2003.

The COVID-19 pandemic was the real reason why fans were restricted. Hence the new era in Bulldog athletics.

It’s been 266 days since the Bulldogs’ season ended last at the Mountain West tournament, and the rest of college sports shut down.

There were no cheerleaders. No band. No fans. Only athletic department staff and the media were able to attend the game in person.

At least the Bulldog hoopsters got to play at home.

The final two home games for the football team, including Friday night, were cancelled because of COVID contact tracing issues.

All players, coaches and other essential staff are tested three times per week, including two days before game day.

Most players and coaches for both teams wore masks while on the bench. Players on the court and referees did not. However, the refs did don masks during media timeouts. 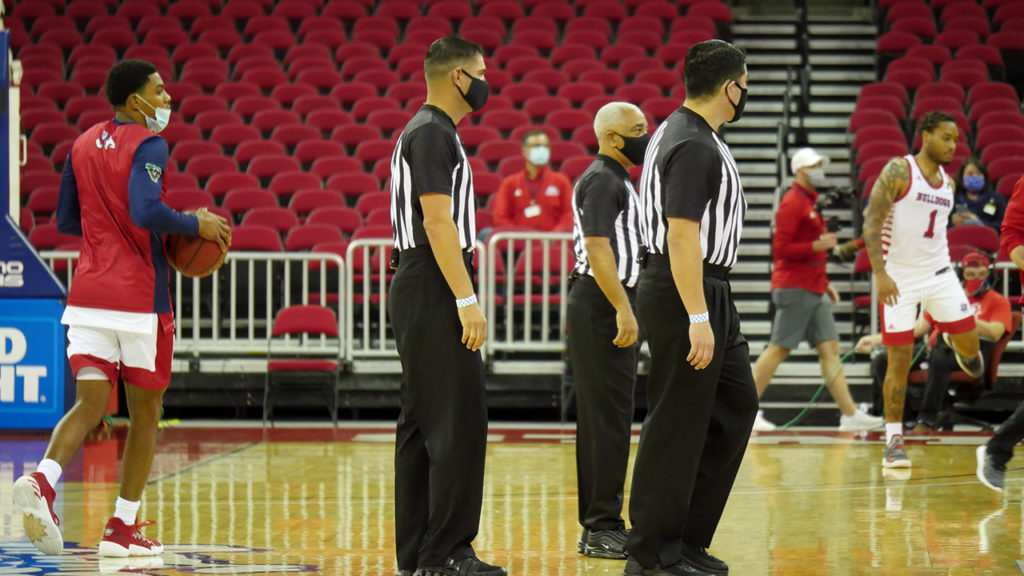 Even the announcers wore masks. Radio voice Paul Loeffler sounded smooth as ever, if not a bit muffled.

At halftime, the hoops and bench areas were sprayed down by an arena worker with a the cleaner strapped to his back with an attached wand.

The game was mostly a breeze for the Bulldogs. After overcoming some early minute jitters, head coach Justin Hutson didn’t have much to yell and scream about.

This year, the Bulldogs schedule has changed to make it more pandemic friendly. The opener vs. WJU is just one of seven non-conference games. Mountain West games start Dec. 28. Teams will be play two-game series, separated by a off-day. 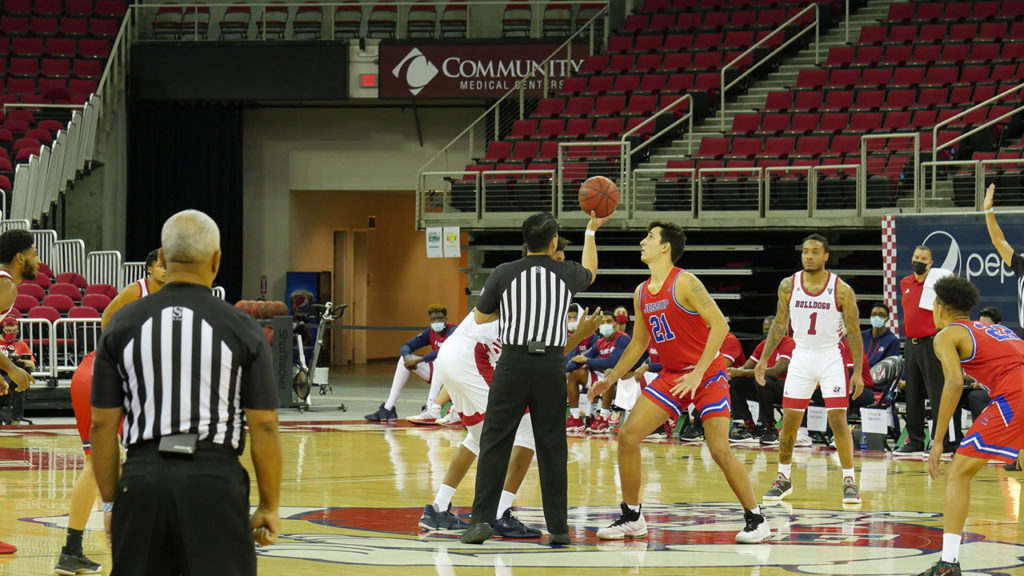 Sounds of an Empty Arena

Prior to the start of the game, the public address announcer still read the good sportsmanship message, warning “fans” that abusive conduct could lead to ejection.

The band played the National Anthem, and Boyz II Men sang “Lift Every Voice and Sing.” Both prerecorded, of course.

The music was still loud during timeouts. WJU coach Lance Van Vogt could be heard conversing with one of the referees.

Perhaps the starkest realization of this new era was in the concourses. They were completely empty. There were no concession workers, no need. Not even the lights in the bathroom were turned on.

The ban on fans will continue until state and county leaders deem them allowable. It will take advancement in the color tier system to make that happen. As with most of the state, Fresno County is in the color purple, the most restrictive. 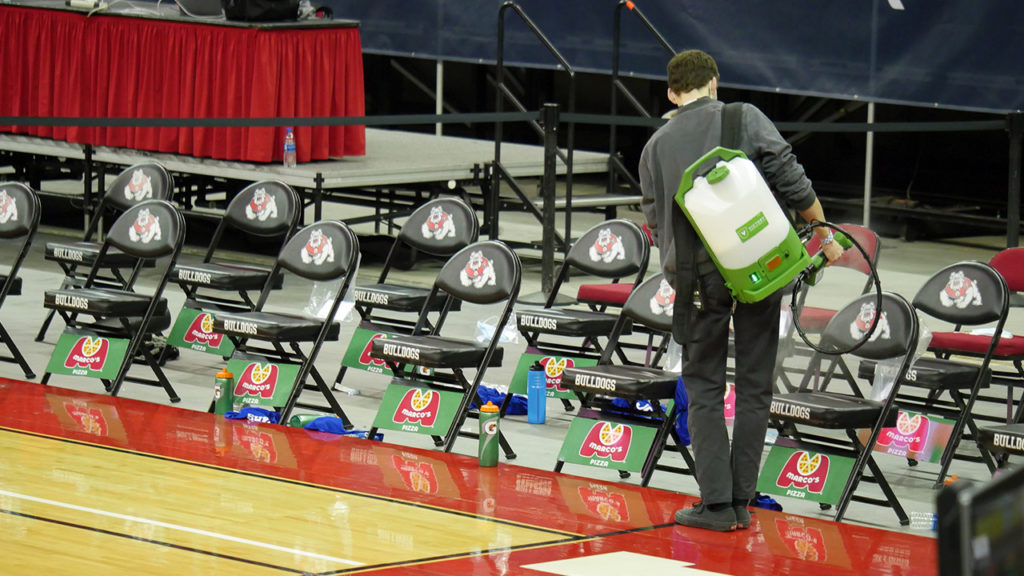 Called Out for Nearly 500% Increase in COVID Cases, Madera County Pushes Back