For a brief moment this summer, Stephanie Moore thought she might finally see a glimmer of hope at the end of the coronavirus recession. Unemployment benefits provided a lifeline for the 38-year-old Los Angeles housekeeper to leave a bad relationship and rent an Airbnb while she looked for a job. But in early October, her state-issued Bank of America debit card balance plummeted from around $400 to negative $1,100 after a credit for fraudulent charges from months earlier was reversed without warning.

So began her unofficial full-time job trying to get the money back.

“It’s kind of like a nightmare,” Moore said. “Every day I’m wondering what’s more important. Do I get on the phone with the bank and try again so I have a place to sleep tomorrow, or do I just accept that I’m going to be on the street and focus on my job search? Because you can’t do both.”

For months, California’s Employment Development Department has attracted the ire of jobless workers and state lawmakers for a backlog of unpaid unemployment claims that peaked at 1.6 million. Now, Moore is among those entangled by potential security lapses and payment errors involving Bank of America, which since 2010 has had an exclusive contract to deliver state unemployment benefits through prepaid debit cards.

It’s a breakdown of the state’s job safety net that raises questions about the best way to get money into the hands of workers who desperately need it, since California is one of only three U.S. states that does not offer a direct deposit option, according to a CalMatters review of public documents. To this day, it’s not clear how much Bank of America has made from handling the bulk of the unprecedented $109 billion California has paid out in benefits since March. Lawmakers are examining the bank’s role in payment issues that began during a two-week identity-verification update, and whether the bank has provided adequate security for unemployment insurance money in the face of rampant fraud.

Bank of America, whose contract is up next July, declined to answer detailed questions about how many unemployed Californians are still unable to use their debit cards, how much money has been withdrawn from accounts flagged for potential fraud, when and how claimants may be paid back or how much the bank has made in fees on the cards. The state told CalMatters that some 377,500 debit cards were frozen this fall and as of Thursday, around 350,000 accounts remain impacted, meaning progress has been slow.

“Unfortunately, there has been billions of dollars of fraud during this pandemic in state unemployment programs, including California,” Bank of America said in a statement to CalMatters, urging those impacted to contact the bank. “We are working with the state and law enforcement to identify and take action against fraudulent applicants, protect taxpayer money and ensure that legitimate applicants can access their benefits.”

For San Francisco Assemblymember David Chiu, a progressive Democrat who authored a 2019 public banking bill and has pushed to reduce state reliance on Wall Street, the confusion marks “another failure” by the state and its corporate vendors. The employment agency hinted it was the bank’s fault, insisting in an Oct. 29 statement that it “has no direct access to debit funds on any accounts” and that those impacted by card issues should contact Bank of America.

“They’re playing the blame game. Someone needs to take responsibility for this,” Chiu said. “I think we’re going to have to revisit that contract if BofA can’t provide the services it promised.”

The state agency said it will review all options this summer.

In August 2011, California was still in the depths of the Great Recession. Unemployment was 12.1%, and the state was paying out $66 million a day in jobless benefits. But at the state agency, a major tech overhaul was underway after a new debit card contract with Bank of America.

At no cost to the state, the bank had begun rolling out prepaid cards to replace paper unemployment checks. It would be faster and more efficient, the EDD argued in a public report at the time, and much more accessible to Californians without bank accounts. The bank promised to share some revenue from merchant transaction fees with the state and guaranteed low fees for the unemployed: a few dollars for multiple ATM withdrawals, $10 for expedited or lost cards, and normal merchant fees whenever the card is swiped. “Terms are more favorable than most people have for their own personal bank accounts,” the 2011 report said. 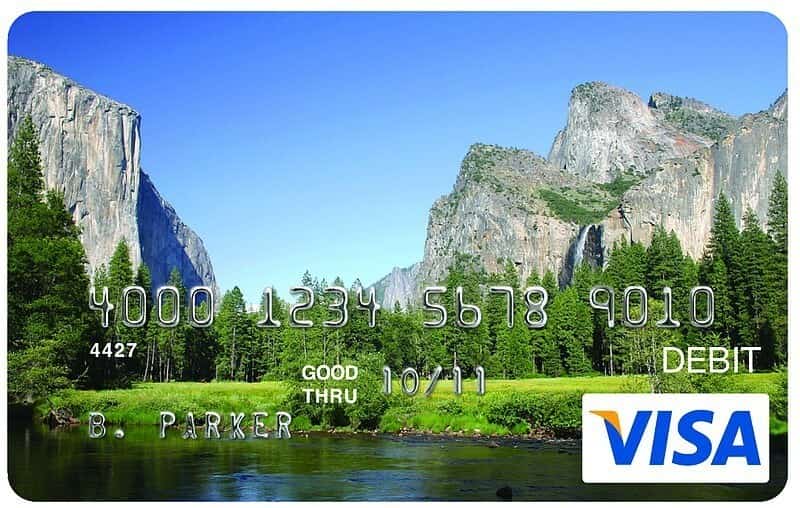 The result was what United Way of California Communications Director Unai Montes-Irueste calls a “NASCAR card,” thanks to its flashy corporate logos for Visa and Interlink. Most other states have moved from paper checks to direct deposit or hybrid debit card and direct deposit systems. This past spring, millions of Californians received their federal coronavirus stimulus payments via direct deposit to personal bank accounts.

Still, California was far from alone in betting that debit cards would be a big part of the future of government benefits. Use of the cards exploded in the last decade at state, local and federal agencies as Bank of America, U.S. Bank, KeyBank, Comerica and others pursued more government contracts. By 2016, government agencies had paid out $146 billion in benefits through prepaid debit cards, generating $518 million in revenue for banks, the Federal Reserve reported. Today, 43 states use a combination of direct deposit and debit card systems, which consumer groups favor to reach unemployment claimants with the widest variety of financial situations.

Michele Evermore, a senior policy analyst at worker advocacy group the National Employment Law Project cautioned that banks acting as middlemen in debit card contracts can sometimes divert funds from workers — a missed opportunity for economic stimulus. “It may seem like a 2% fee here and a 2% fee there doesn’t amount to much, but in the aggregate, it really does,” Evermore said.

In California, paper checks are still available by request, and Bank of America notes that debit card customers can transfer the money from the card to their own bank accounts — both time-consuming alternatives, said Lauren Saunders, associate director of the National Consumer Law Center. In a 2013 report, the organization found that despite the relatively consumer-friendly terms in the state’s Bank of America unemployment contract, Californians paid almost $1.8 million in fees in a year.

Bank of America referred questions about fees generated by its California unemployment contract to EDD. The employment agency has not yet responded to a CalMatters request for records of revenue and fees related to the debit card contract.

In the meantime, the stories of Californians dealing with debit card problems continue to pile up. For Santa Maria single mother Aimy Onan, a drained account meant falling behind on rent and moving into a shared bedroom with her daughter in her ex’s home with a new girlfriend. For furloughed Disney candy maker Julie Hansen, a negative $12,000 balance threatened her ability to care for her autistic son. For Demarcus Sparks, who was self-employed before the pandemic, a frozen debit card led to a Greyhound trip from L.A. to stay with his mom in Georgia for fear of ending up in a shelter.

“They treat you like trash,” said Paul Dease, a 52-year-old antiques dealer in San Diego County, who has been locked in a dispute with Bank of America over $1,000 withdrawn from his account without notice. “How many people have the same story I have, that have lost $1,000 or $800 and haven’t gotten it back?”

That much remains unclear. Chiu said lawmakers also have yet to receive updated account information, or answers about the “mind boggling” omission of microchips in the cards to root out fraud.

“We’re actually no longer allowed to tell them a timeframe, because we have no clue,” said one Bank of America customer service worker, who asked to remain anonymous since they were not authorized to discuss the matter. “Every day, I talk to 30 people with the same story. I just pray for them after my shift, honestly.”

A Field Day for Fraud 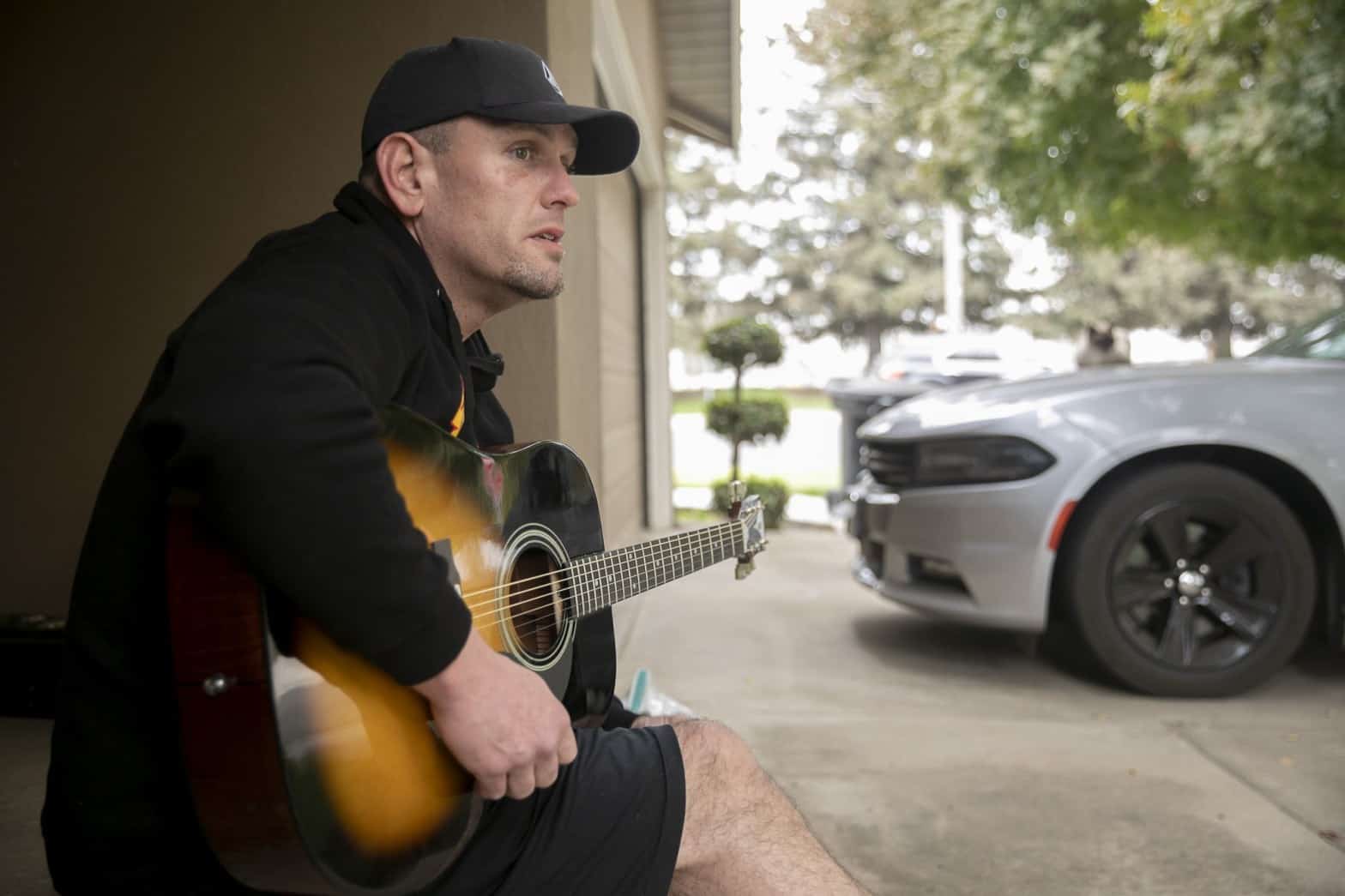 Matt Hoffman, seen at his girlfriend’s house in Escalon on Nov. 13, 2020, spends his days sitting on the porch while on hold with EDD, Bank of America and FEMA. According to Hoffman, he spends an average of 4 hours on hold per call. (Photo by Anne Wernikoff for CalMatters)

If the world wasn’t paralyzed by a deadly pandemic, it might look like Matthew Hoffman has been traveling quite a bit. His Bank of America unemployment card ledger shows transactions and ATM withdrawals in Alabama, Modesto, Sacramento, Tennessee, Connecticut and even a series of overseas charges.

But Hoffman, a former Comcast employee who has been out of work since a stroke last year, said he’s never used the card in any of those places. In total, he saw almost $7,000 disappear. He said one bank representative told him the fraud dispute he filed had been closed without investigation. Another said it was reopened. Finally, he was told that a credit would arrive on Nov. 10. It didn’t.

“What’s the point of having and paying into unemployment insurance if it’s not actually made available to me when I need it?” said Hoffman, who is alternating staying with his girlfriend and in his car after the loss of his Livermore rental home in a recent wildfire.

Stories like Hoffman’s aren’t hard to find after a governor-appointed Strike Team in September advised EDD that organized fraud “represents a serious risk to the state, and EDD must develop capabilities to understand and combat it.”

In total, 693,000 paid and unpaid unemployment claims out of the more than 14 million filed from March to early October were temporarily suspended for potential fraud during the agency’s late September reset, according to an EDD statement to CalMatters. From dark web conspiracies to YouTube rap videos, the range of apparent fraud could cost the state “hundreds of millions,” Sacramento Assemblymember Jim Cooper predicted at a recent EDD hearing.

In one instance, Beverly Hills police arrested 100 people and seized 200 fraudulent unemployment debit cards worth more than $4 million after a series of shopping sprees on Rodeo Drive. Until fraud is detected, Bank of America reaps normal transaction fees every time the cards are swiped under the terms of its state contract. The bank promised California “best-in-class” fraud monitoring in its original unemployment debit card pitch, and assured the state that “EDD has no liability for issues related to fraud.”

But amid the unemployment surge during the pandemic, Beverly Hills Assistant Police Chief Marc Coopwood said much of the burden has fallen on local law enforcement, rather than EDD or the bank, to uncover such schemes.

“The real victim in this, the people whose identities were stolen, they’re going to get a 1099 next year,” Coopwood said. “They’re going to spend years fighting this with the IRS.”

Where California goes from here to remedy its unemployment woes isn’t clear. The EDD has vowed to work through its remaining backlog of 542,000 unpaid unemployment claims by January. Bank of America said it has increased staffing at prepaid customer service centers “nearly 20-fold” to deal with unprecedented demand, and that it continues “to review and decision claims in a timely fashion and within the regulations.”

“I’m skeptical this will be resolved without litigation,” said Daniela Urban, director of Sacramento’s Center for Workers’ Rights. “I think that it’s warranted. The question is whether EDD fixes it first, or what the response is.”

By Lauren Hepler and Stephen Council

Lauren covers the California economy for CalMatters. Her past stories have been published by the New York Times, the L.A. Times, the Guardian and others. Stephen is working as an Audience Intern this summer and is a rising junior at Northwestern University’s Medill School of Journalism.