“I anticipate 30-40% of our restaurants in Fresno will never open again,” Dyer said during an online panel discussion with other California mayors.

Adding to the impact, “The vast majority of those are owned by people of color,” Dyer said.

Dyer made his comments during a forum hosted by CalMatters, a public interest news organization focused on California politics and policy issues.

Dyer says Fresno sales tax receipts confirm that “big box” stores like Costco and Walmart have thrived during the pandemic while local businesses have suffered.

“They’re the big winners in COVID-19,” Dyer said. “Unfortunately, the mom and pops and many of the restaurants have been impacted.”

“I anticipate 30-40% of our restaurants in Fresno will never open again. The vast majority of those are owned by people of color.”– Fresno Mayor-elect Jerry Dyer

His comments came as Gov. Gavin Newsom announced Fresno County has fallen back into the most restrictive ‘purple’ tier on the state’s COVID roadmap because of a sharp rise in coronavirus infections. In a change to the state’s previous process, Newsom said restaurants, gyms and other specified businesses have just 24 hours to discontinue indoor operations, rather than 72 hours under earlier rules.

The return to a prohibition on indoor dining has led at least one local restaurant owner to say she would not comply.

House of JuJu Owner in Tears

“I’m so tired of fighting this battle,” Glenn said.

She says she has yet to see data showing restaurants are a source of COVID-19 infections.

Glenn said she has no other choice but to stay open. She says the decision is not for her own benefit, but for the employees that depend on the income from their jobs.

She also said the pandemic’s mental health toll is a factor. “The emotional impact of this is overlooked,” she said, referencing recently reported increases in suicide attempts reported by the Fresno County health department.

Glenn said she’s heard from other business owners who say they will also not change their operations in adherence to the county’s tier status.

Restaurants Not Coming Back 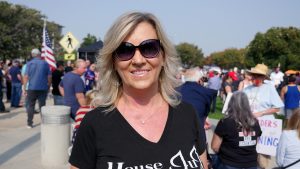 “The emotional impact of this is overlooked.”–’House of JuJu’ co-owner Julie Glenn

At the beginning of September, the CRA conducted a survey in which 30% of restaurant operators said they would either close their restaurant permanently or would downsize by closing some locations.

Several restaurants in the local area have already closed their doors, citing the effects of the pandemic. Rocket Dog Gourmet Brats and Brew closed their Clovis location, the High Sierra Grill and Bar at the southwest corner of Bullard and West avenues, and Sweet Tomatoes restaurants are among them.

“It was amazing how long the lines were for people in Fresno that needed food,” explained Dyer. “People that had never ever stood in a food line in their life – were standing in line for 2 or 3 hours to get food.”

Dyer says the county’s return to the ‘purple’ tier will exacerbate the problem.

Dyer says in the past 2 years, the availability of housing in Fresno has decreased by 50%.

He said local developers have told him new residents are pouring in thanks to the growth of telecommuting.

He also believes that because of the pandemic there will be more ‘telehub’ locations that might house up to 100 workers at a location. He thinks Fresno is primed to take advantage of that business trend.

“We have the available land and the affordability factor that will be a big draw,” said Dyer.

He also predicts the amount of housing in downtown Fresno could double or triple. “The level of interest that we’ve had from developers, investors, venture capitalists, in our downtown area has been incredible over the last few months,” Dyer said.

He also says there’s a continued interest in manufacturing in Fresno due to available land.