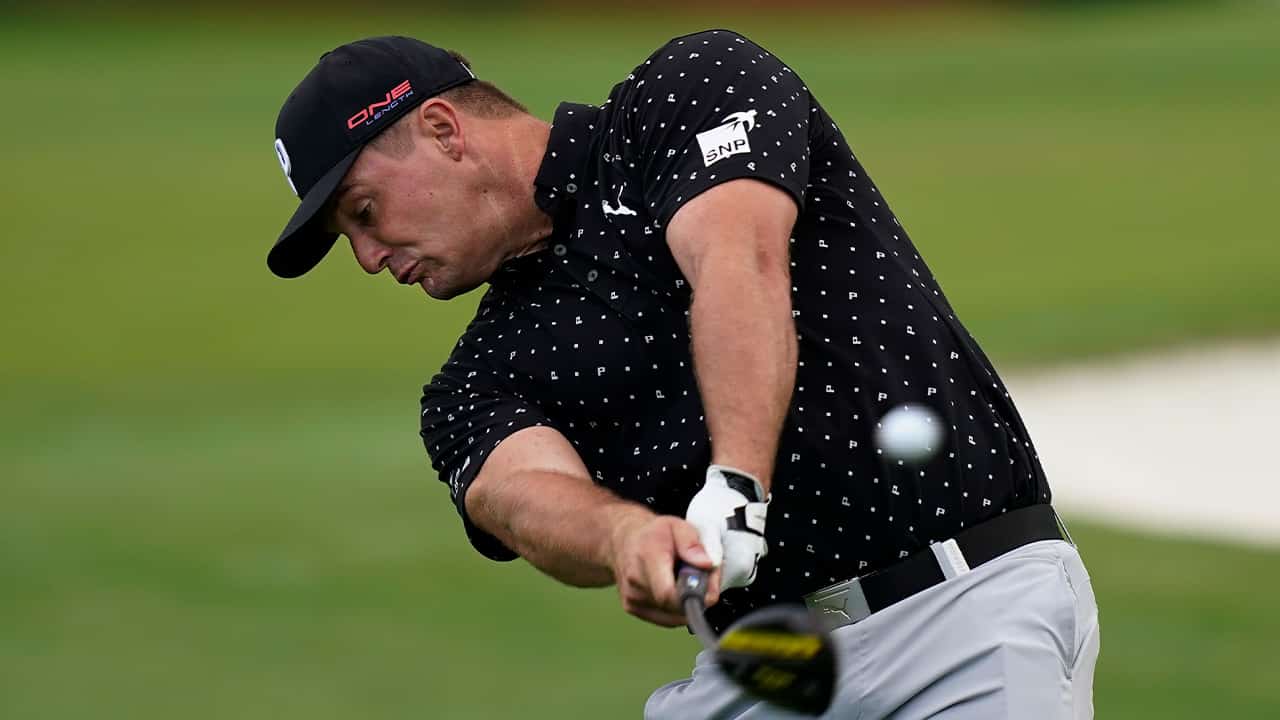 AUGUSTA, Ga. — The cart picking up golf balls on the practice range at Augusta National can only go so far. Club members were swapping tales Tuesday about the staff who reached the end of the range and had to sort through azalea bushes more than 350 yards away to pick up a few more balls.

The culprit, of course, was Bryson DeChambeau.

Never mind that Tiger Woods is the defending champion at the Masters, and still emotional 19 months later talking about that fierce embrace he shared with his son. Or that the silence of not having spectators for the first time is just as eerie as the color of autumn in the trees.

DeChambeau has become a showstopper. He has everyone curious about whether his bulk and his behemoth tee shots can undress Augusta National.

“It’s a substantially easier golf course for him than it is for everybody else,” said Justin Thomas, who joined DeChambeau, Woods and Fred Couples for a practice round at the start of the week. “I think once he starts messing with that longer driver and has a little bit more free time, then as crazy as it is, he might be able to hit it further.”

That longer driver is a half-inch short of 48 inches, the legal limit in competition, the type used by the World Long Drive competitors who turn the long ball into a spectacle. DeChambeau tried it out Monday after his practice round and liked how it reacted. He has not ruled out using it when the Masters begins Thursday.

The average swing speed for a power player on the PGA Tour is around 120 mph.

Numbers define DeChambeau these days, starting with the more than 40 pounds of muscle and mass he has added in the last year, remarkable gains from an estimated 5,000 calories a day in his diet and relentless work in the gym. More recently, it was the excitement at home in Dallas when one of his drives carried just over 400 yards.

The numbers that stand out at Augusta National are stamped on the bottom of his irons.

He hit pitching wedge into the 505-yard 11th hole on Monday and asked Woods, “What did you hit in ’97?” Woods told him pitching wedge.

Woods was hitting pitching wedge for his second shot into the par-5 15th when he won the first of his five green jackets. He was 21 and his length was unlike anything seen at the Masters. The course was some 500 yards shorter back then, lengthened over the next few years in what became known as Tiger-proofing.

Since then, rapid advancement in technology — bigger drivers, better science, solid-core golf balls — allowed everyone to join the distance race. The difference is DeChambeau has taken it to another level through his athleticism.

He got bigger and stronger to swing faster and hit the ball even farther. And he has no idea if he’s nearing the limits or just getting started.

“I’m just trying to get up there like I’m in a batter’s box swinging as hard as I can, trying to hit a home run,” he said. “I don’t know if there’s a better way to say it.”

It Is No Less Impressive — the Concept He Wanted to Explore, the Risk He Took, the Relentless Work

Length has been an advantage going back to Bobby Jones and Sam Snead, Jack Nicklaus and Seve Ballesteros.

Length is not everything, and DeChambeau would be the first to concede that. Ask him about Winged Foot and he will talk about how well he hit his irons for the week, not to mention his short game. It’s no different at the Masters.

“I can hit it as far as I want to, but it comes down to putting and chipping out here,” he said. “That is one of the things that I think people sometimes struggle to see. As much as I can gain an advantage off the tee, I still have to putt it well and chip it well and wedge it well and even iron play it well, and that’s what I did at the U.S. Open.”

It is no less impressive — the concept he wanted to explore, the risk he took, the relentless work.

How it translate at the Masters won’t be known until the end of the week. It’s still about the low score. Rory McIlroy still believes Augusta National provides the proper test no matter how far DeChambeau or anyone else hits it. He doesn’t feel the game is being threatened just yet.

“If trophies were handed out just for how far you hit it and how much ball speed you have, then I’d be worried,” McIlroy said. “But there’s still a lot of different aspects that you need to master in this game.”

Minor Speculation Has Grizzlies Moving to Cal League. Will Attendance Take a Hit?