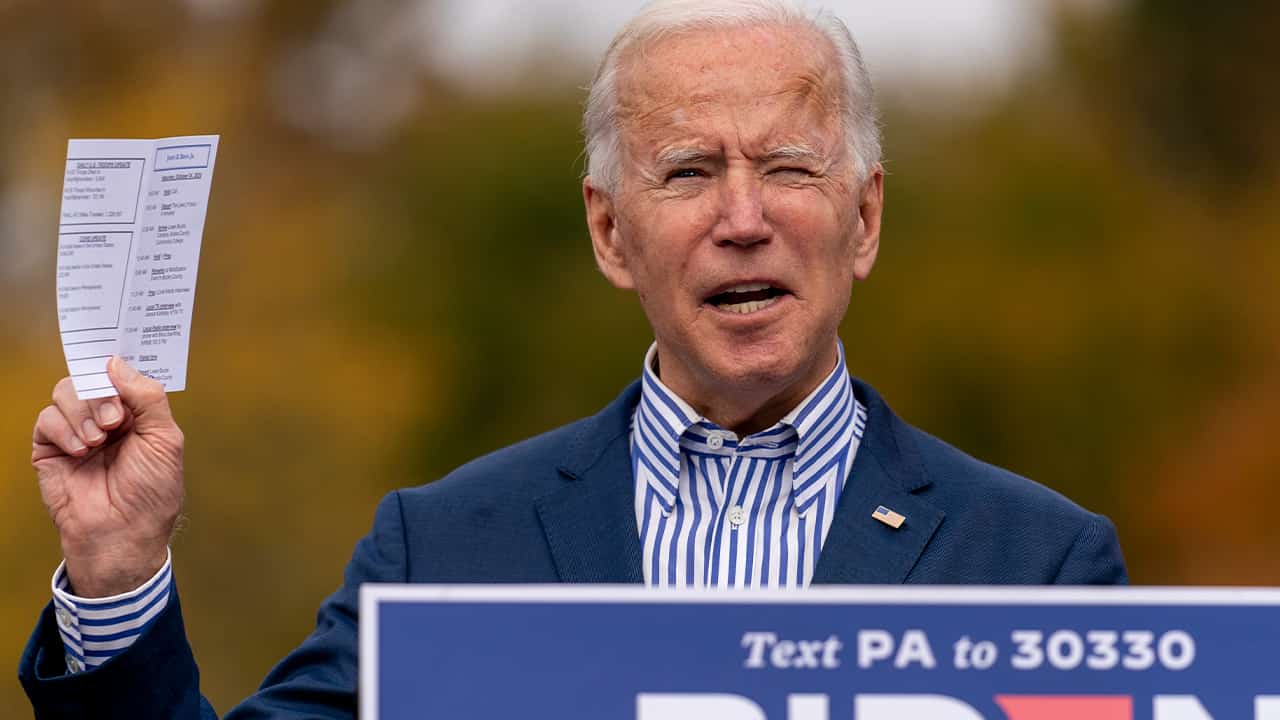 Democrat Joe Biden has won the state of Hawaii.

He was awarded its four electoral votes on Tuesday.

Hawaii is a reliably Democratic state and last went for a Republican presidential candidate in 1984, when it was won by Ronald Reagan.

Democrat Joe Biden has won California in the race for president and the 55 electoral votes that are the most of any state.

California has voted for the Democratic presidential nominee in every election since 1992. Four years ago, Hillary Clinton trounced Donald Trump by more than 4 million votes.

Biden’s running mate, U.S. Sen. Kamala Harris of California, made history as the first Black woman to be a vice presidential nominee for a major political party. She’s also the first Democrat from California to appear on a major party presidential ticket.

President Donald Trump has won the state of Utah.

Utah hasn’t supported a Democratic presidential candidate since Lyndon B. Johnson in 1964.

Trump won Utah in 2016, but independent candidate Evan McMullin had a strong showing in the state owing to widespread distaste of both Trump and Democrat Hillary Clinton. McMullin captured more than 20% of the vote.

California, Oregon and Washington are all liberal states, while Idaho is conservative.

California has 55 electoral votes, the biggest haul of any state. It’s also the home of Biden’s running mate, Sen. Kamala Harris. She served as the San Francisco district attorney and the state’s attorney general before winning election to the Senate in 2016.

Democrat Joe Biden has won New Hampshire and its four electoral votes, holding on to a state that President Donald Trump only narrowly lost in 2016.

The state was considered a 2020 battleground despite not going for a Republican presidential candidate since George W. Bush in 2000.

Four years ago, Democrat Hillary Clinton won the small state over Trump by roughly 2,700 votes. That’s less than 1% of the 732,000 ballots cast, and it was the second-closest margin of victory in the country.

Biden didn’t fare as well in New Hampshire’s first-in-the-nation Democratic primary in February. He finished a dismal fifth, behind Bernie Sanders, Pete Buttigieg, Amy Klobuchar and Elizabeth Warren. But his candidacy took off after a commanding win later that month in the South Carolina primary, leading to the exits of several of his competitors.

President Donald Trump has won the state of Missouri.

The Republican nominee on Tuesday was awarded its 10 electoral votes.

In 2016, Trump beat Democrat Hillary Clinton in the state by 18 percentage points.

President Donald Trump has won the state of Kansas.

In 2016, Trump coasted to victory over Democrat Hillary Clinton by 20 percentage points in the state.

Democrat Joe Biden has won the state of Colorado.

He was awarded its nine electoral votes on Tuesday.

The state, which went for Democrat Hillary Clinton four years ago, has trended sharply to the left since President Donald Trump’s 2016 election.

The state also has a competitive Senate race between Republican incumbent Cory Gardner and the state’s former governor John Hickenlooper. Gardner is considered one of the nation’s most vulnerable senators.

Nebraska, one of two states that divides its electoral votes, has five total electoral votes up for grabs. Trump won the statewide vote, which is good for two electoral votes. He also won the 3rd Congressional District, which nets him a third vote.

Nebraska’s 1st and 2nd congressional districts haven’t yet been called.

President Donald Trump has won the state of Indiana.

The Republican nominee on Tuesday was awarded its 11 electoral votes.

President Donald Trump has won the state of Arkansas.

Arkansas is a reliably Republican state that hasn’t gone for a Democratic presidential candidate since Bill Clinton in 1996.

President Donald Trump has won the state of South Carolina.

The Republican nominee on Tuesday was awarded its nine electoral votes.

Trump handily won the state in 2016 over Democrat Hillary Clinton. South Carolina hasn’t voted for a Democratic presidential candidate since Jimmy Carter in 1976.

Joe Biden’s victory in the South Carolina primary in February started a wave of wins that helped cement his status as Democrats’ presidential nominee. South Carolina Republicans didn’t hold a primary, an early sign of their support for Trump’s reelection.

The last Democrat to win a presidential race in West Virginia was Bill Clinton in 1996.

Trump defeated Democrat Hillary Clinton in West Virginia four years ago by 42 percentage points, one of his highest margins of victory in the nation. Many in the state credit him for his conservative populism and promises to help the declining coal industry, even as few expected he could bring back jobs in a dying field.

The Trump campaign and Nevada Republicans are asking a state court judge to extend voting by one hour at 22 Las Vegas-area locations, citing reports that those sites did not open on time Tuesday morning.

An Election Day lawsuit filed in Clark County District Court was getting an immediate hearing before Judge Joe Hardy.

Polls are scheduled to close at 7 p.m. Pacific time, but election officials keep sites open until the last person in line at that time can vote.

Clark County has 1,150 precincts bunched into 125 voting centers in and around Las Vegas.

The lawsuit filed against Clark County Registrar of Voters Joe Gloria points to a Twitter message posted by the Nevada Secretary of State elections division at 7:22 a.m. referring to several polling locations having technical problems that delayed opening.

The message urged people in line to be patient, saying the sites would open soon.

The Trump campaign and Nevada GOP have been involved in several legal fights in Nevada, including an appeal on Tuesday to the Nevada Supreme Court, seeking to stop the mail-in ballot count in Democratic-leaning Las Vegas.

They are the first two states called in the 2020 presidential election.

Kentucky is reliably conservative, while Vermont is considered one of the most liberal states.

Trump projected confidence Tuesday that he will win key states like North Carolina and Florida and said he’s expecting a “great” evening.

He was set to call into conservative host Mark Levin’s show minutes after the first two interviews, but Levin abruptly said Trump would not be appearing. Levin said he was told the president couldn’t come on the show but gave no further details.

Trump told Wisconsin host Vicki McKenna that he is expecting a strong night based on lines of people waiting to vote. Trump has sown doubts about mail voting, without evidence, and is expecting most of his supporters to turn out on Election Day.

At the same time, his campaign was hosting a call with reporters in which they projected confidence but predicted a tight race that would come down to turnout.

In North Carolina, an armed man loitering at a polling site on Election Day has been arrested and charged with trespassing.

Thirty-six-year-old Justin Dunn was legally carrying a firearm but loitered at the Charlotte site after voting Tuesday morning, which prompted a precinct official to call police over fears of voter intimidation. A precinct official accompanied by a police officer asked him to leave the site and banned him from the location.

Police say Dunn left the precinct but returned about two hours later. He was taken into custody and charged with second-degree trespassing.

Publicly listed numbers for Dunn were disconnected when a reporter tried to reach him Tuesday.

More than 13,000 votes in one South Carolina county will have to wait a while to be counted because of a printing error.

Dorchester County Election Commissioner Todd Billman said at a news conference Tuesday that the mail-in ballots did not have the proper bars printed at the top so the scanner used to count the votes won’t register them. He says the error does not affect anyone’s vote.

The votes will have to be counted by hand and will not be counted Tuesday. Billman says Dorchester County’s full results will be finished by the Friday deadline to certify returns.

The county went for Democrat Hillary Clinton in 2016.

Vermont Gov. Phil Scott says he voted for Joe Biden for president, making him the first Republican governor in the nation to acknowledge voting for the Democratic presidential candidate.

The Republican governor told reporters Tuesday after casting his ballot in his hometown of Berlin, Vermont, that he had never voted for a Democrat in his life.

“As many of you knew, I didn’t support President Trump. I wasn’t going to vote for him,” Scott said. “But then I came to the conclusion that it wasn’t enough for me to just not vote. I had to vote against.”

He says he “put country over party, which again wasn’t an easy thing to do in some respects.”

A couple of other current Republican governors have said they aren’t voting for Trump, but they said they weren’t voting for Biden, either. Massachusetts Gov. Charlie Baker says he left his ballot blank for president. Maryland Gov. Larry Hogan says he voted for President Ronald Reagan, who died 16 years ago.

Democratic presidential nominee Joe Biden isn’t making any predictions about the outcome of the election as the final hours of voting tick down.

Speaking to reporters Tuesday outside a Delaware community center, Biden said he’s “superstitious” about offering predictions for election night but remains “hopeful.” He says he’s heard from aides that there’s “overwhelming turnout” among young people, women and older Black adults in places like Georgia and Florida.

He says, “The things that are happening bode well for the base that has been supporting me — but we’ll see.” Still, he admitted, “It’s just so uncertain” because of how many states are in play.

Biden also wouldn’t commit to commenting on any results on election night, even if President Donald Trump weighs in on the vote. “If there’s something to talk about tonight, I’ll talk about it,” Biden said. “If not, I’ll wait till the votes are counted the next day.”

Biden capped off a day of last-minute campaigning in his hometown of Scranton, Pennsylvania, and in Philadelphia with a couple of local stops in Wilmington, Delaware. He spoke to the CEO of a community center for teens and visited a pool where he worked as a teenager, closing out a day that began before the sun rose.

The cybersecurity agency at the Department of Homeland Security says the U.S. election so far has featured the usual technical glitches and routine issues but no apparent signs of any malicious cyber activity — at least not yet.

The Cybersecurity and Infrastructure Agency also says it’s too early to declare victory as polls near closing time around the nation Tuesday and with days of vote counting and certification ahead.

A senior agency official says, “It has been quiet and we take some confidence in that but we are not out of the woods yet.” The official spoke on condition of anonymity to brief reporters about ongoing nationwide election monitoring efforts ahead of the release of any kind of official evaluation.

The official warned that local and state election systems could experience problems as results are reported, but the most likely cause would be from high demand put on the system as people overwhelm websites to check results.

Explained: Why It Will be A Long Night, or More, Before President is Known