Shootings Down 60%, Police Say. Task Force Will Continue Through Holidays. 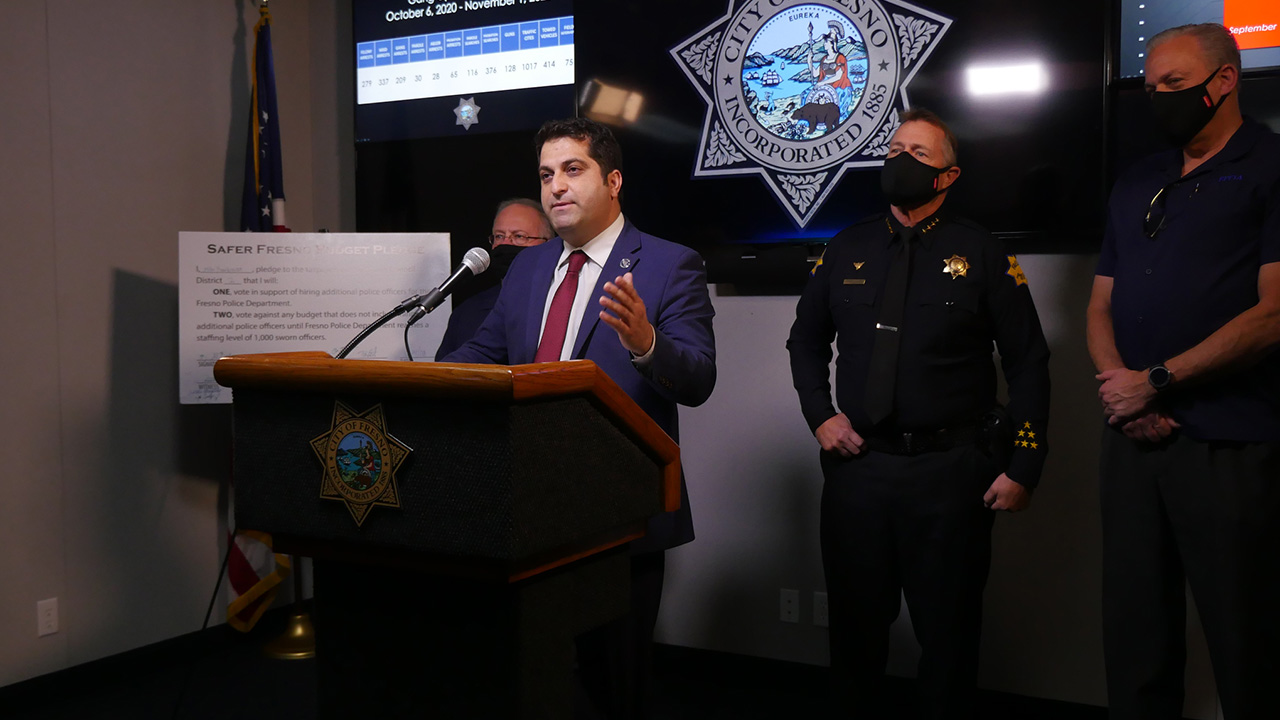 Fresno police say shootings in the city have dropped 60% since a violence suppression task force was formed on October 6.

Chief Andy Hall told reporters at a Monday afternoon news conference that the task force will continue in force through the end of the year.

“So far, this operation has resulted in 279 felony arrests,” said Hall. “209 of those felony arrest involve gang members. We’ve also removed 128 illegal guns from our streets.”

Hall has blamed the early release of prisoners and $0 bail policies as reasons for an increase in shootings in Fresno starting in September. 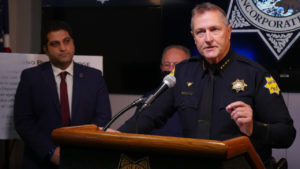 “I believe this budget from the mayor and the city council is an important step to showing support for the men and women who serve this community.”–Fresno Police Chief Andy Hall

In October, the Fresno County Superior Court approved changes to local bail rules, exempting various weapons and gang involvement charges from the plan. The $0 bail policy was implemented to reduce the potential for COVID-19 outbreaks within the jail population.

Hall said he recently learned that the state prison system is accepting transfers from local jails again. He said the move will free up about 100 more beds at the Fresno County jail.

Two recent events — a community-organized City Hall rally and a “crime summit” at the fairgrounds — sought to open lines of communication among the police, political leaders and community members.

“I believe we are starting to see that cooperation,” said Hall. “But that only works when we’re part of the community. We need to continue moving forward with our community policing efforts.”

Councilmember Mike Karbassi stood next to Hall and Fresno Police Officers Association President Todd Frazier at the news conference to reiterate his support for law enforcement.

Karbassi says he is committed to a goal of increasing the size of the police department to 1,000 sworn officers. 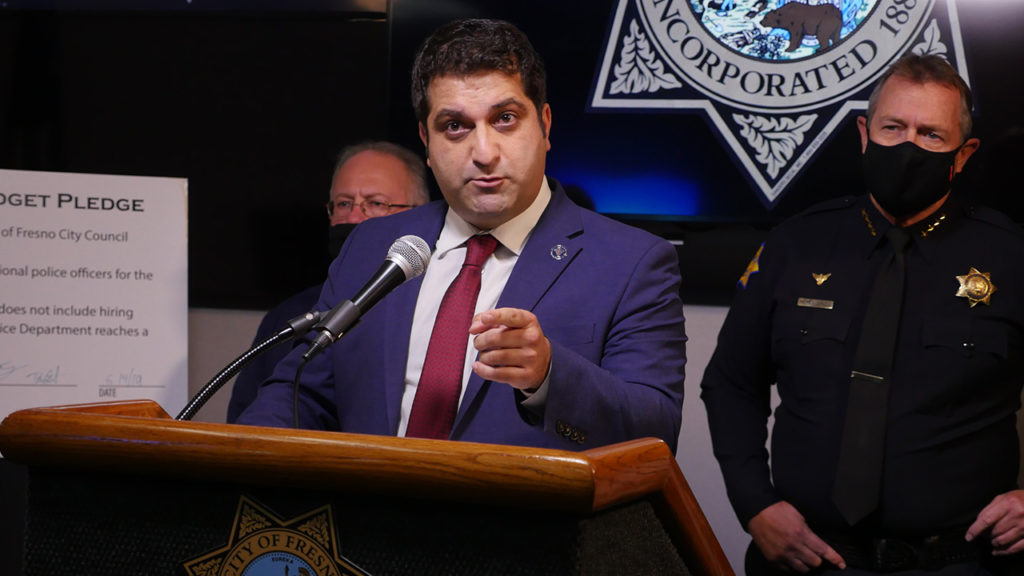 “We approved a significant budget that did not defund our police department,” said City Councilmember Mike Karbassi during a Monday news conference at the Fresno Police Department. (GV Wire/Jahz Tello)

“I believe this budget from the mayor and the city council is an important step to showing support for the men and women who serve this community,” Hall said.

“This budget removes the hiring freeze and allows us to resume hiring of our much needed civilian support staff,” said Hall. He added that there were also no layoffs of any sworn officers or civilian staff. 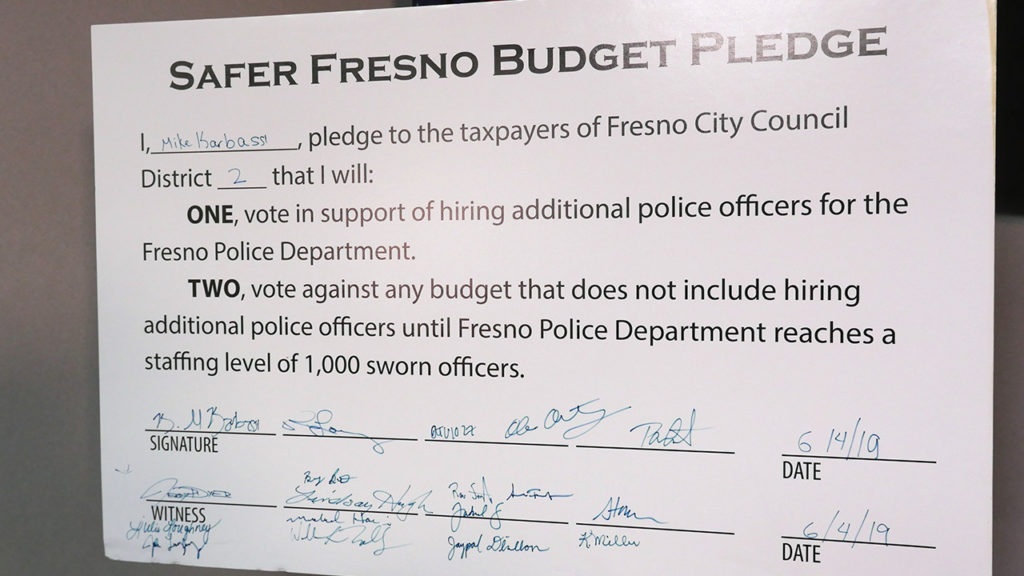 “We’re down we’re down quite a few officers,” explained Hall.

He says as of today there are 788 officers. Frazier said as many as 80 are on long term absences. “We need officers now,” he says.

“We are working overtime right now,” said Hall. “Officers are giving up their own personal time.”

Attracting Officers from Other Cities 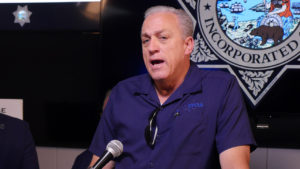 “Like Seattle alone, they recently saw about 118 officers leave that department. We’re hoping to capitalize on some of that dissatisfaction and hopefully bring some of those officers to Fresno.”–Todd Frazier, President Fresno Police Officers Association

Frazier spoke about trying to attract officers from police agencies elsewhere that are being contracted by city budgets aiming to reallocate funds.

“Like Seattle alone, they recently saw about 118 officers leave that department. We’re hoping to capitalize on some of that dissatisfaction and hopefully bring some of those officers to Fresno,” said Frazier.

Hiring officers from other departments that have already trained them is ideal because it can take about a year and a half to get new recruits fully prepared, he said.

“Right now we offer $10,000 for lateral transfers,” Karbassi said, referring to an incentive currently offered by the city. “Some people have talked about doubling that. I’m proposing to wait to see if we can do that to incentivize them if they live in the city of Fresno.”

KOMO-News recently reported on a series of proposals in Seattle to cut the police budget by up to 17 percent in 2021.

City council members have proposed more than $70 million in cuts to police spending. The Seattle Police Department’s 2020 budget is $409 million.

The council is considering shifting mental health responses away from the police department and hiring 11 specialists to deal with those calls at a cost of about $1 million.