Mayor-elect Jerry Dyer didn’t just stop by a peace rally at Fresno City Hall to say a few words. He laid out a series of moves he plans to make within his first 90 days of taking office in January.

Hundreds of people — crime victims, along with representatives of community organizations, non-profits and churches — attended a rally Friday outside of City Hall. The event was spearheaded by the leaders of the local advocacy groups Save Our Children and Take A Stand Committee.

The goal of the rally, they said, was to bridge a communication gap between the communities where violence is occurring and elected leaders. 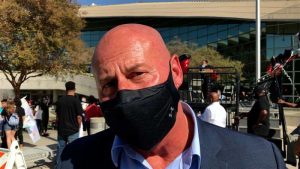 “The war on gangs may never be won, but it’s a battle we have to continually fight.”–Mayor-elect Jerry Dyer

“The war on gangs may never be won,” says Dyer. “But it’s a battle we have to continually fight.”

He says it comes down to two main concepts: strong enforcement along with intervention/prevention.

— Reinvigorate the Mayors Gang Prevention Initiative by bringing people into the mayor’s office. “We are going to be meeting with these organizations that have an impact on gang violence in our city,” explains Dyer. He said he’ll make sure they have funding through grants or city dollars to properly equip them.

— Establish “Bringing Broken Neighborhoods Back to Life” in every neighborhood in the city. The program aims to connect neighbors with each other, the police, and other resources. It has operated in southwest Fresno for nearly 20 years, hosting regular block parties, an annual “Santa’s Village” serving kids with primarily single mothers in collaboration with faith-based groups and other community organizations.  “That’s important. That’s what causes us to unite as a community,” says Dyer.

— Utilize Camp Fresno in the Sierra National Forest for youth activities. “Even taking some of our gang members up there, even opposing gang members, for the purpose of simply getting those individuals to set aside their differences and to unite,” said Dyer.

He says he’ll always be supportive of the Fresno Police Department and its officers because he believes the people that rely on their services live in the neighborhoods where they’re needed most. “Not in the sense of them being an occupying force, but a welcome presence and making sure to keep the city safe,” says Dyer. 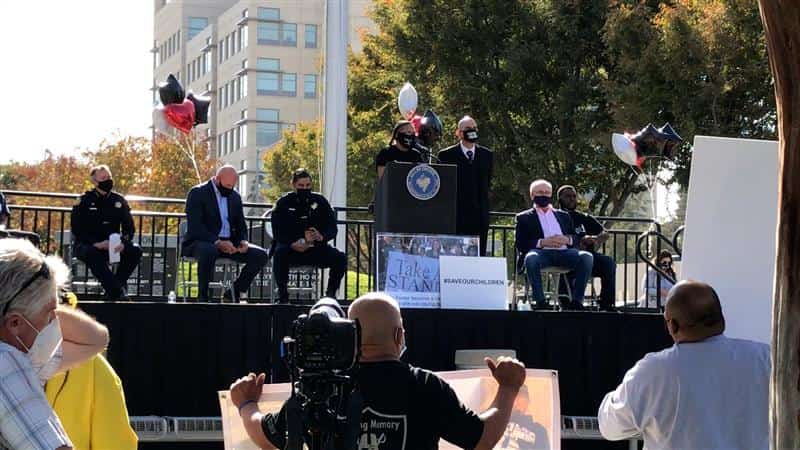 For over 30 minutes, families that have lost loved ones to shootings took the podium to tell their stories, share the names of the loved ones they’ve lost, and to ask for the community to come together to help stop the violence.

Cheryl Sumler, founder of Take A Stand Committee, lost a grand-daughter to gun violence in 2017 and took her turn at the microphone. “You all have to stop this. You’ve got to turn them in!” said Sumler referring to calling police with tips on crime. “The community that we serve was the community that took my baby.”

Jonte McCreary lost her son Deondre Howard in 2015 when he was shot and killed. At the time Howard was 21 and playing sports at Fresno City College. “I go through a lot every day. Every day I go through a lot! I have dreams of him coming to my house,” said McCreary through tears. 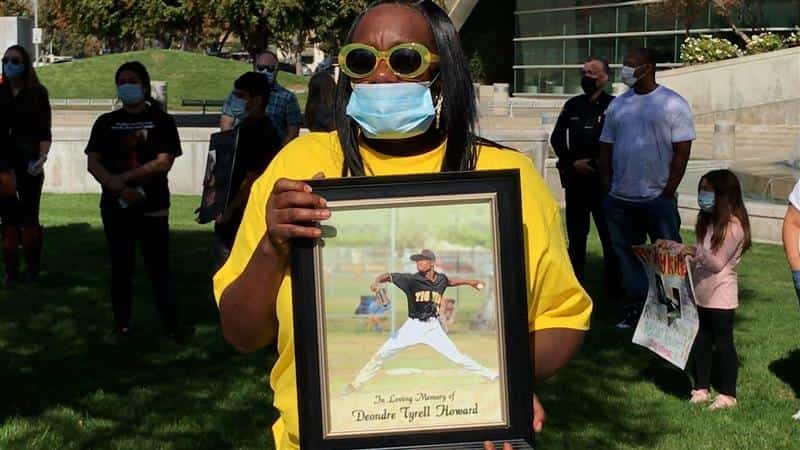 Jonte McCreary holds up a photo of her son Deondre Howard who was shot and killed in 2015. (GV Wire/Jim Jakobs)

A majority of the speakers called for working with the police and elected officials (some sitting behind them on stage) to end the violence.

District Attorney Lisa Smittcamp wasn’t a scheduled speaker at the rally, but was in attendance and was asked to share her thoughts.

For a time Smittcamp was heckled by a man in the crowd. After rally organizers spoke with him, the disruption ended.

A moment of silence for the victims of violence is held during Friday’s rally outside city hall. (GV Wire/Jim Jakobs)

“For example, Fresno Street Saints have been doing a lot of great work and outreach with gang intervention programs.”–City Councilman Luis Chavez

They said faith leaders, non-profits, and representatives from area schools will attend to discuss strategies, resource needs, and efforts already being utilized in local neighborhoods.

“For example, Fresno Street Saints have been doing a lot of great work and outreach with gang intervention programs,” says Chavez to GV Wire℠ by phone. “This is not just a police problem. It’s a community problem.”

Chavez said he hopes the summit will result in short term goals and plans for longer-range strategies to improve community safety.