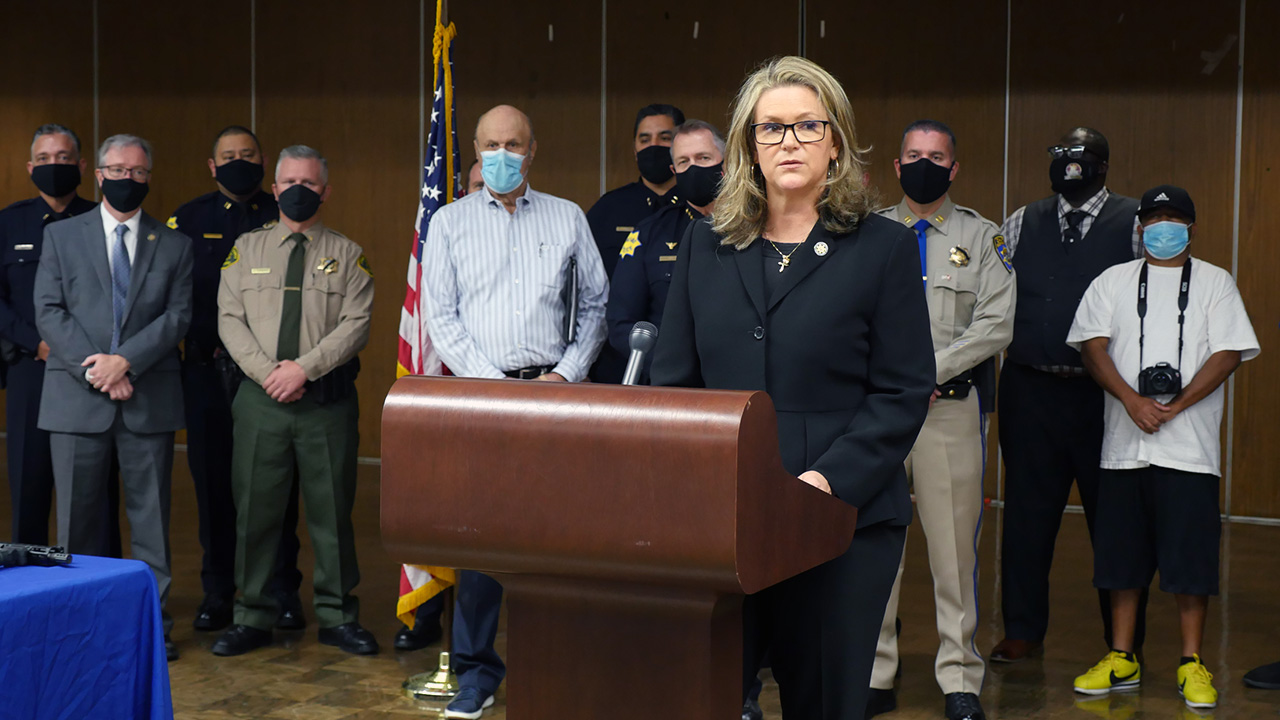 After an increase in violent crime in the city, Fresno County District Attorney Lisa Smittcamp and several law enforcement leaders addressed the media at a Wednesday afternoon news conference at the county Plaza Building.

Smittcamp had choice words for Newsom’s decision to release prisoners in response the COVID-19 pandemic.

“Governor, open up the prisons. Do your job. Manage. Manage your inmate population with all the restrictions you are putting on us and provide them the medical care they need should they become ill,” Smittcamp said.

Smittcamp blamed the early release of violent prisoners as one of the reasons why Fresno and the state has seen an increase in crime.

“Stop using COVID-19 to promote your political agenda. The blood of the children being shot by out-of-control gang members in our city is on your hands and on the hands of every person who does not make public safety a priority,” Smittcamp said. “Enough is enough.”

Smittcamp also called out Newsom for his plan to close state prisons.

Newsom said he intends to close the Deuel Vocational Institution prison next year. Another closure is planned for 2022.

The governor’s office did not respond for a comment from GV Wire℠.

Earlier this month, Fresno Police Chief Andy Hall instituted a city-wide violent crime suppression task force after a wave of violence. This past weekend, a food vendor was seriously injured after an assault.

Despite the sensational cases, Hall says the task force is working. Shootings are down 32%, 71 illegal weapons sized and 165 arrests have been made since October 6. Hall blamed the early release of prisoners and $0 bail for most felony arrests as reasons for the increase.

“We can no longer afford to trade a pandemic in our state for a crisis in our community. A crisis of crime. Our jails and our prisons are essential services to our community,” Hall said. “I’m calling on Governor Newsome to open up our prisons. And stop victimizing our community.”

Hall praised a recent decision by Fresno County Superior Court leaders to add more crimes that are exempt from $0 bail, allowing them to remain in jail.

Pastor D.J. Criner, a member of the Commission on Police Reform, closed the news conference with a call for peace.

Trump the Dancer? His Moves to ‘YMCA’ at Rallies Are a Hit