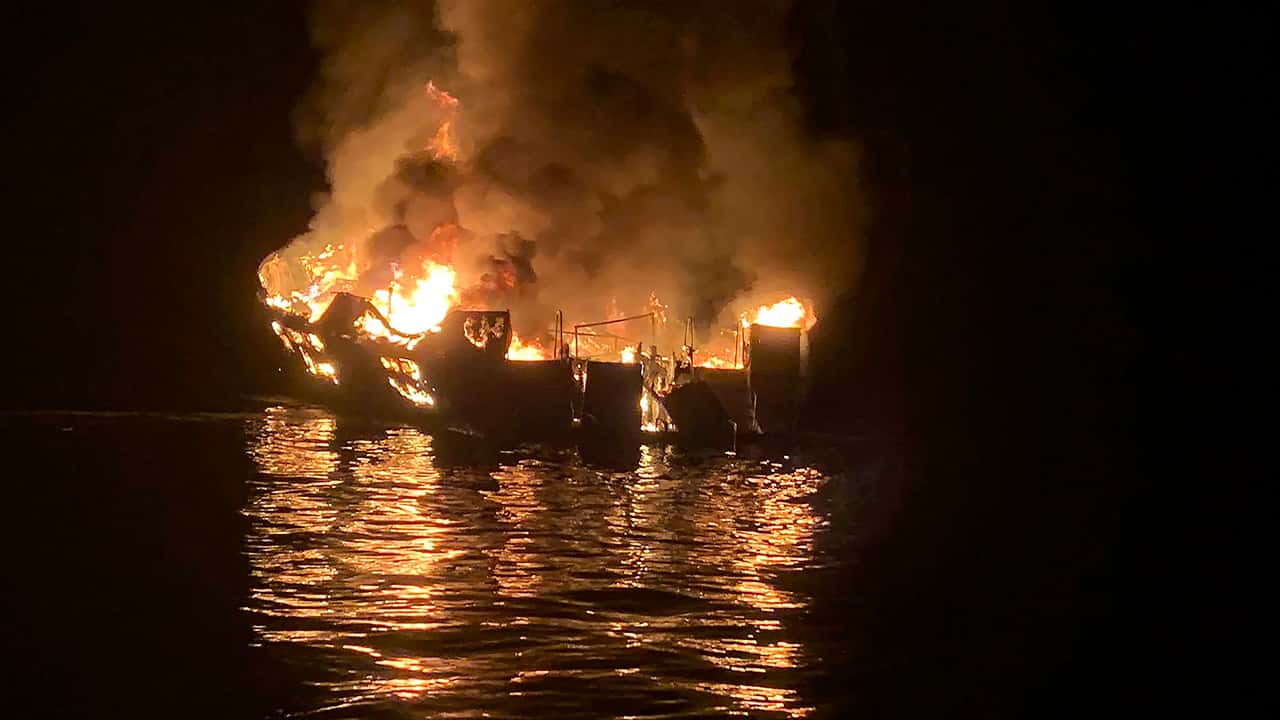 LOS ANGELES — The lack of a required night watchman aboard a scuba dive boat delayed the detection of a fast-moving fire that trapped and killed 34 people below deck as the vessel was anchored off the Southern California coast last year, federal investigators said Tuesday.

The predawn fire aboard the Conception is one of California’s deadliest maritime disasters, prompting criminal and safety investigations. The Sept. 2, 2019, tragedy killed 33 passengers and one crew member on a Labor Day weekend expedition near an island off Santa Barbara.

Investigators told the National Transportation Safety Board that because some of the recovered bodies were wearing shoes, they believe the victims were awake and trying to escape before being overcome with smoke. Coroner reports list smoke inhalation as the cause of death for all.

The absence of the required roving patrol, investigators said, delayed detection of the fire, allowing it to grow beyond the six-member crew’s firefighting capabilities, hampering evacuation efforts and directly leading to the high number of fatalities.

Board member Jennifer Homendy, who traveled to Santa Barbara in 2019 and toured a sister ship of the Conception, blasted the captain, Jerry Boylan, and owner, Truth Aquatics, during the hearing. She said the tragedy shouldn’t be called an accident.

“I hate the term accident in this case because, in my opinion, it is not an accident if you fail to operate your company safely,” Homendy said.

Investigators Said That Because the Boat Burned and Sank, They Couldn’t Determine What Caused the Fire

Coast Guard records show the Conception passed all recent safety inspections. Its records also show that since 1991, no owner, operator or charterer has been issued a citation or fine for failure to post a roving patrol. Because of that, NTSB investigators believe the Coast Guard does not have an effective way to verify that boats are operating with watchmen.

Investigators said that because the boat burned and sank, they couldn’t determine what caused the fire. But they found that it began toward the back of the main deck salon area, where divers had plugged in phones, flashlights and other items with lithium ion batteries that can spread flames quickly.

After the Conception fire, the Coast Guard issued a bulletin recommending a limit on the unsupervised use of lithium ion batteries and extensive use of power strips and extension cords.

“Some people may walk away and say, ‘Well, I wish I knew what the ignition source was,’ ” Homendy said. “But the key here is that the focus should be on conditions were present that allowed the fire to go undetected and to grow to a point where it prevented the evacuation.”

Five crew members, including Boylan, were asleep in the upper deck when the fire broke out around 3 a.m. in area above the only escape hatch to the bunkroom where the passengers and a single crewmember were sleeping. Boylan and other other four crewmen escaped by jumping into the water after making repeated attempts to try to save those below deck.

The size of the emergency hatch — 22 inches by 22 inches (56 centimeters) — met regulations, though safety board members criticized it as inadequate. Its location required passengers to climb to an upper bunk and then pull themselves through the the opening.

“I don’t see how an average human with a life jacket on could get up through that hatch,” board member Michael E. Graham said, adding that it would be difficult to get up to and through the hatch “without being a contortionist.”

The families of 32 victims also have filed claims against the boat owners, Glen and Dana Fritzler and Truth Aquatics. In turn, the Fritzlers and the company have filed a legal claim to shield them from damages under a maritime law that limits liability for vessel owners. Court filings show they have offered to settle lawsuits with dozens of victims’ relatives.

Court documents say federal criminal charges against the boat’s captain are imminent, though that probe is separate from the NTSB’s proceedings.

The NTSB does not have enforcement powers and must submit its suggestions for safety enhancements to bodies like the Federal Aviation Administration or the Coast Guard, which have repeatedly rejected some of the board’s safety recommendations after other disasters.