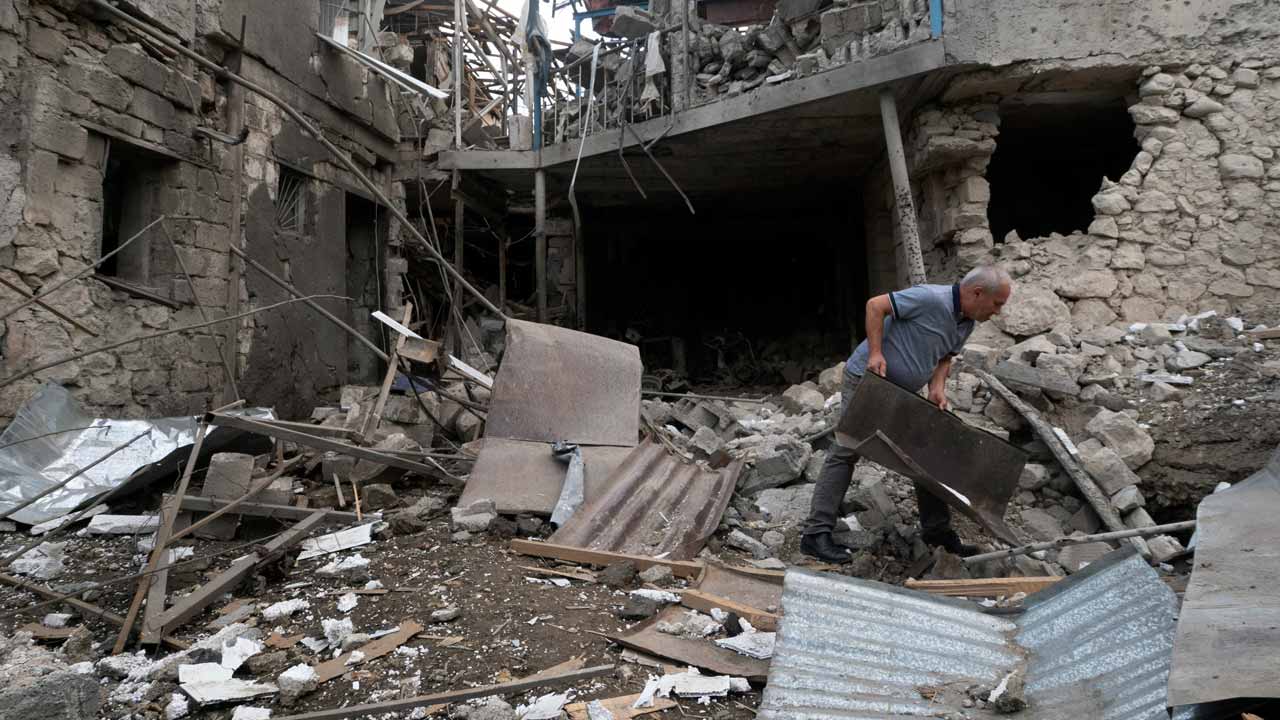 When thinking of “appeasement”, the natural connection is to German Chancellor Adolf Hitler when he used British Prime Minister Neville Chamberlain’s lack of guts, spine and foresight to his advantage, ultimately rolling over Czechoslovakia, and then the entirety of Europe, including its Jewish population. Although the Hitler correlation occurs during the Second World War, the comparison applies today. This time it is to Turkey, Azerbaijan and, in a sad twist of irony, to Israel, vis-à-vis Armenia, with implications for Europe. Appeasement is, simply speaking, allowing a bad actor to commit bad acts so that the consequences of confrontation can be avoided at a time when confrontation is needed.

The West has allowed Turkey to get away with murder for nearly a century. A good starting point is 1974 when Turkey invaded Cyprus, ostensibly to protect Turks on the Grecian island. To this day Turkey illegally occupies Cyprus’ northern third. Turkey learned a valuable lesson in appeasement; the rest of the world did not, and since then its only gotten worse.

It’s no secret that Turkey was a covert supplier of sarin gas to Syrian rebels, including al-Qaeda terrorists, beginning as early as 2012. Turkey continues to be a driving force in the destruction of Syria. Another pass given to Turkey; another gift of appeasement.

The most egregious acts of appeasement concern the Armenian Genocide. In late 2019, Armenian Genocide resolutions passed both Houses of Congress with a combined 98% approval rate. There was little press on the matter. Turkish reaction, however, was swift and melodramatic as it continued its denial and labeled the congressional action “null and void.”

The passage of these two bills came after years of efforts from Armenian advocacy groups and others seeking justice, pitted against powerful resistance who would rather not confront an inconvenient truth. They include, among others, Turkey, the State Department, and Israel.

On the presidential front, Ronald Reagan properly spoke about the Armenian Genocide, and that was as good as it got. George H.W. Bush discussed it while running for president, but the State Department redirected his speech toward a fictional Turkish narrative. President Bill Clinton, after a call from the Israeli advocacy group AIPAC, pulled a widely supported Armenian Genocide resolution from a House vote minutes before its introduction in 2000. That same year George W. Bush, in a heated presidential race, promised to recognize the Genocide if elected. Bush easily grabbed Armenian votes, but after inauguration the State Department nudged him to downgrade the Genocide to a mere tragedy. Obama did the same thing. All because Turkey is (and the “is” is quickly changing to a “was”) a valuable NATO ally in the Middle East.

Armenians have maintained a defensive position since the cease-fire. Each Armenian killed is met with the same neutral response, which assigns a false parity to both sides. Each side is told to refrain from violence and negotiate.

Having positive foreign relations is a legitimate national interest. But what those interests are and how they are maintained is debatable. The State Department has enforced Turkey’s gag rule of presidential silence on the Genocide for years, and has now extended that silence to Artsakh, an historic Armenian region given to Azerbaijan by Joseph Stalin, but liberated by Armenians after a bitter war with Azerbaijan that ended in 1994. The war ended, but the attacks have continued by Azerbaijan since then, unprovoked by Armenia and unabated by the diplomatic and press communities. Each act of appeasement, just on the Genocide alone, exponentially builds on the previous unwarranted dispensations. But Artsakh is different because there has been a quarter century of opportunity to resolve the matter; instead, the world has witnessed a quarter century of appeasement to oil-rich Azerbaijan.

Armenians have maintained a defensive position since the cease-fire. Each Armenian killed is met with the same neutral response, which assigns a false parity to both sides. Each side is told to refrain from violence and negotiate. The appeasement is that Azerbaijan, the constant aggressor, is never called to answer for its violence. This emboldens a bad actor. Over a quarter century of appeasement, and today the Azeris are directly targeting Armenian civilians in Artsakh’s smaller villages and the capital city of Stepanakert, along with Armenia proper. The natural continuation of this Azeri-instigated, and Turkish-supported, violence is genocide. Both Turkey and Azerbaijan’s autocratic rulers have stated this intention. Turkey, and now Azerbaijan, know the lessons of appeasement. This latest round of Azeri and Turkish appeasement is spot on with world reaction, and inaction, toward Hitler. Hitler was a real threat to Europe and its Jewish population 80 years ago. Europe is again under threat, this time by Turkey’s President Recep Erdogan. However, the immediate threat of Erdogan and Azeri President Ilham Aliyev is Artsakh and Armenia proper.

The appeasement of Turkey coincides with Erdogran’s grip on power. From 2003 onward he has expanded his military, jailed journalists, and rolled back the rights of women and minorities.

Erdogan’s power is not limited to Turkey. In 2017 Erdogan’s guards viciously attacked peaceful protesters outside the Turkish Embassy in Washington, D.C. Erdogan watched with pride and approval from the front porch. The repercussions were minimal. Appeasing a sadistic dictator in his own country is one thing; allowing him to act with near impunity in the United States is something else.

The press, for its part, has enabled such destructive behavior by regularly questioning Armenian Genocide justice juxtaposed against hurt Turkish feelings and strained relations. The “Turkish feelings” mantra has gotten old, so a new mantra, partially overlapping with the old, is that both Armenia and Azerbaijan are equal aggressors in the current war in Artsakh. Making matters worse is that the press deliberately fails to call out, or even mention, Turkey’s involvement. Turkey is importing mercenary ISIS terrorists from Syria into Azerbaijan to help an inept Azeri leadership. Turkey has troops and advisers on the ground and has taken over the Azeri Air Force.

Even more enabling is the deafening silence that has sheltered Israel who, for years, has been selling suicide drones to Azerbaijan for use against Armenian civilians. Such silence is understandable: for decades Israel has artfully played the Holocaust card, accusing any critic of anti-Semitism. Israel has gone from the country founded by survivors of the Shoah to a participant in genocide.

Another enabler is the United Nations who’s General Assembly President is Volkan Bozkir, a Turk and ardent genocide denier. To its credit, the UN has accepted East Timor, South Sudan and Kosovo, which found their place on the map because of peoples’ desire to control their destiny. Artsakh is no different and equally deserving. It has been a full-fledged country for 26 years and in that time the world has waited for the Artsakh Armenians to capitulate. That will never happen. Therefore, the time to recognize Artsakh as an independent country is now — any further delay is appeasement and an opportunity for those who wish its destruction. But before Artsakh can continue growing, regime change is needed in Azerbaijan. With a population wallowing in poverty and discontent thanks to the hyper corruption of petro-dictator Aliyev, removing him is easy enough. Turkey, although in need of fresh and real leadership, would be a challenge. But there are ways of containing Turkey, especially with mutual-aid/defense pacts between Armenia and other friendly nations. Heavy sanctions would also be needed, not unlike those imposed on Iran. The basis of Iranian sanctions is the threats to Israel; the basis of Turkish sanctions is the clear and present danger to Armenia.

Turkey’s concern is its original sin of the Armenian Genocide. Turkey was founded on genocide, which dismisses any notion of Turkey’s legitimacy.

Turkey’s concern is its original sin of the Armenian Genocide. Turkey was founded on genocide, which dismisses any notion of Turkey’s legitimacy. To fend that off they need to silence the speakers of truth and the seekers of justice. It is for this reason that Genocide justice, including reparations, must happen in conjunction with Turkish sanctions, regime change in Azerbaijan, and Artsakh independence.

Along with matching mustaches, Erdogan and Aliyev share another characteristic with Hitler — their narcissistic love of hate, death and destruction. Israel’s support of Azerbaijan’s mad desire to eliminate Armenians propels it to a shame on par with Hitler. Israel and its people have been on the receiving end of race extermination; Israel should know better.

The consequences of Chamberlain’s shortcomings are clear as we peer through the looking glass of history. Today we don’t need a looking glass. We can see with our own eyes and consciences what a lack of guts, spine and foresight are doing to the Armenians. Armenia is a stepping-stone for Turkey reigniting the Ottoman Empire; as such, Europe and the rest of the world should be on guard. But first and foremost, truth and consequences must replace appeasement.

Marshall D. Moushigian is a Fresno attorney and financial adviser.
Related Topics:ArmeniaIsrael
Up Next

Opinion: Investment in EV Charging Is a Win for All Californians