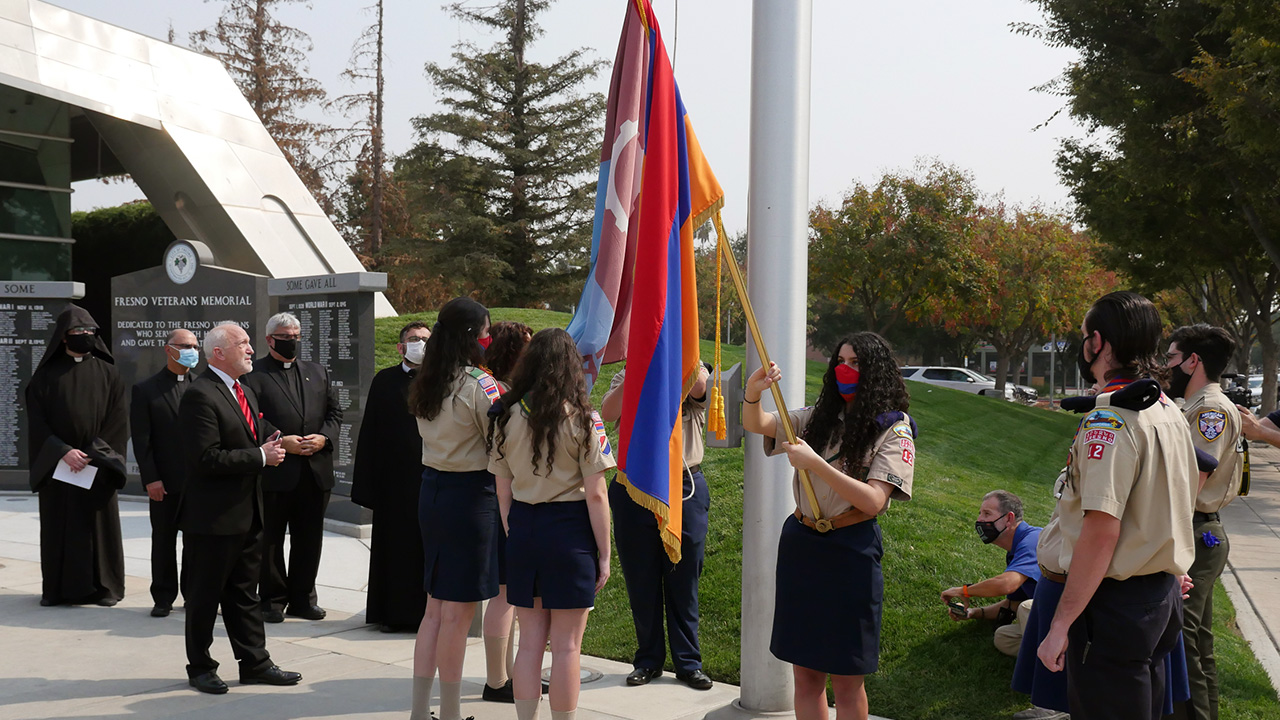 “Because I think about my grandparents. That is the first thing I think about any time I met at an event, especially with my daughter carrying the flag,” Messerlian said, with her 17-year old daughter and husband by her side.

“It makes me think of what they went through in the first genocide and they escape and they survived. But the horror that they must have gone through is very hard to to accept. And makes me proud that our youth is so involved and trying to make changes,” she said.

Showing solidarity with the Armenian people, the city hoisted the flag in a ceremony today. The honor comes as Armenian and Azerbaijan are engaged in armed skirmishes over the Nagorno-Karabakh region, also known as Artsakh.

An estimated 50,000 people of Armenian descent live in the Central Valley, according to Berj Apkarian, honorary consul for the Republic of Armenia. Several attended the event on a hazy, hot afternoon. Hundreds of Central Valley residents demonstrated on the streets of Fresno the past several nights, showing support with Armenia.

“The U.S. should assist the people of Armenia in every possible way because we don’t turn our back on our friends,” Chavez said. 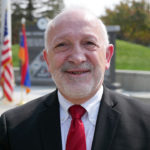 “Our brave soldiers will fight and will die to liberate and to make sure that every inch is ours.” — Berj Apkarian, honorary consul for Armenia

Clashes between Azerbaijani and Armenian forces in the region since Sept. 27 have killed hundreds in the worst escalation of hostilities since 1994 when a truce ended a war that raged for several years. Nagorno-Karabakh lies inside Azerbaijan but has been under the control of ethnic Armenian forces backed by Armenia for more than a quarter-century.

For Apkarian, he is confident Armenia will prevail.

“Our brave soldiers will fight and will die to liberate and to make sure that every inch is ours,” Apkarian said.  “Tell your congressmen into your senators to impose sanctions against Turkey and Azerbaijan.”

Apkarian says that Turkey is backing the Azerbaijani aggression.

Mike Karbassi, one of four city councilman to attend the event, had a message for President Donald Trump.

“Mr. President, support the people of the Republic of Artsakh and their quest for self-determination. Mr. President recognized the Armenian genocide. This people of the city of Fresno will always stand against evil,” Karbassi said during the event.

There is not a significant Azerbaijani community in the Central Valley, at least compared to Armenians.

Fresno City Council President Miguel Arias, who organized the event, understood the complexity of the situation.

“The important part is that the United States isn’t simply standing by silently and watch the massacre of any innocent civilians, irrespective of their culture, their ethnicity or their country of origin,” Arias said. “We have a role as the United States, the biggest and freest democracy, to intervene so that genocide don’t occur during our watch.”

On Monday, the city council will hold a special meeting to support a resolution backing Armenia.

This is not the first time a local government agency discussed the issue in Nagorno-Karabakh. In 2013, the Fresno County Board of Supervisors passed a resolution recognizing the area as an independent region.

According to published reports at the time, he Azerbaijani government asked the county to rescind its decision.